‘Write That Down, The Comedy of Male Actress Charles Pierce’ by Kirk Frederick

‘Write That Down, The Comedy of Male Actress Charles Pierce’ by Kirk Frederick 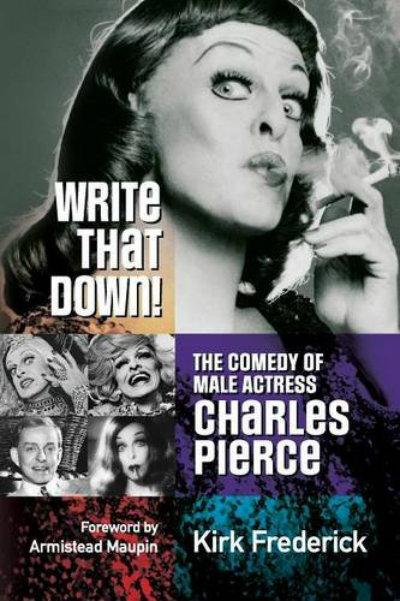 Among the list of gay artists who have made a significant contribution to the fabric—in this case, emboldened with red marabou feathers—of what we identify as our culture, no one runs the risk of being forgotten more than the incomparable Charles Pierce. When one’s artistry is dependent upon the complex relationship with a live audience, attempting to capture the multitudinous versions of actor Pierce—as he navigates both the interior and the exterior of the characters he chose to play—is tricky business (there’s a “line” there which Pierce would immediately glom onto and instruct his aide-de-camp, Kirk Frederick, to “write that down.” Thank God, he did).

In their longstanding relationship, Frederick wore as many hats as Pierce wore wigs: costar, publicist, confidante, dresser, and (perhaps unwittingly) biographer. Frederick is savvy enough to know that what’s more important than star-crossed love affairs or well-timed facelifts is Pierce onstage (not off) and that is precisely what he dishes out in Write That Down, The Comedy of Male Actress Charles Pierce with a divine foreword by Armistead Maupin.

Maupin, in fact, gets it right in the book’s nascent pages. It’s not Pierce (who looked a bit like a bank teller in “real life”) we were drawn to, it is how Pierce made us feel in his presence (and I stress the male pronoun here rather than make a list of the ladies he brought to stunning life) that we want to experience again. Or in the case of you virgins who haven’t been Pierced, get your front row seat for the first time.

In addition to the “healing laughter” that informed Pierce’s performances, Maupin refers to “a dream he implanted in me.” Huh? In this instance, it involved the partnership of author Frederick and his lover who were celebrating their two year anniversary of coupledom. Pierce brought them onstage to a rollicking and heartfelt response.

This was 1971, honey, and Pierce—amidst zingy one-liners, glam gowns and a legion of fans that included show biz royalty—utilized all of those ingredients to be more of himself. And, in turn, allowed us to be more of ourselves. While the curtain on that particular performance had “come down,” it hadn’t really, because Pierce’s unadorned endorsement of Frederick and his mate was decidedly part of what Pierce transmitted and instilled—astonishingly, perhaps even spiritually—from the stage to his audience.

Because no matter whom he was “playing”—whether the lascivious Mae West or the neurotic Bette Davis—Pierce was playing Pierce. This wasn’t Jim Bailey disappearing into Judy Garland or Craig Russell “channeling” Peggy Lee. Pierce was letting his audience know that it was okay to be yourself, even if you had to wind yourself up into a twenty-five-foot feather boa to do it

Frederick has painstakingly created a virtual Pierce encyclopedia—describing every detail, from the performer’s undergarments to his over-the-top humor: “I did not go to my vocational guidance counselor in high school and say, ‘Hi, I’d like to be a female impersonator.’ She came to me and said, ‘Charles, I’ve seen you in the hall. You’re a female impersonator.’ Well, at least I’m something.”

Much has been said about the multiple descriptions of Pierce—from “Male Actress” to “Master/Mistress of Disguise,” most of which were simply ways to reinvent himself; branding, if you will, long before we thought of the term in relation to a performer. In those days, a queer artist had to know how to sell it and Pierce was savvy (as are those who titled this book)

What Frederick does—maybe consciously, maybe not—is reinvents Pierce yet again. And by studying every move, every inflection, every piece of comic business (and writing it down)—what emerges is the portrait of an actor. Perhaps one could even say that, in the process of writing the book, Frederick become a Charles Pierce impersonator.

This is Frederick’s gift to us, and to Pierce, because even Pierce didn’t possess the temerity to identify his greatest gift: the art of acting. As Frederick illustrates over and over, it is Pierce’s utter diligence as an artist, a well-trained actor with a vocal and physical instrument that was electrified by heart and fortified by muscle—that needs to be honored and recorded.