‘Treyf: My Life as an Unorthodox Outlaw’ by Elissa Altman

‘Treyf: My Life as an Unorthodox Outlaw’ by Elissa Altman 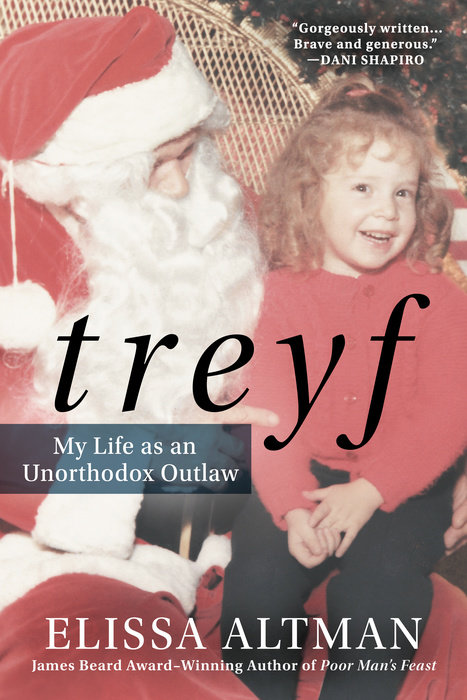 Food memoirs are very much in vogue right now because we are all supposedly obsessed with celebrity chefs, the hot new restaurant, Instagramming our meals, and watching cooking shows. I confess that it is not my favorite genre, but I am fascinated by stories of sexual orientation and religion. And I appreciate it when an author can take a random thing, like food, and recognize the way it symbolizes something else, something even more important. And that is exactly what Elissa Altman does in Treyf— food stands in for love, faith, and rebelliousness.

Even if you never get beyond Treyf‘s front cover you will know one of its major themes: the difficulty of holding onto religion in a modern America. The subtitle is “My Life as an Unorthodox Outlaw,” and there is a young Altman, adorable as anything, sitting on Santa’s lap and smiling. Looking at it, I can’t help but recognize myself. I was raised Jewish and I also sat on Santa’s lap. It was something I never thought that deeply about until Altman made me consider it.

That act alone marks Altman and her family as treyf, at least according to her grandmother’s definition of the word, and Altman, who came of age in the 1970s, fits the bill in other ways as well: She watches Billy Graham (“I turned the volume way down low, like it was porn”); “is not invited to return” to Sunday school and is therefore unable to have a bat mitzvah; sings a Christmas carol to her grandparents; and enjoys David Bowie crooning “The Little Drummer Boy” with Bing Crosby. Worst of all, she’ll eventually realize she’s queer. That revelation is met with much hostility by Aunt Sylvia. “Who do you think you are, to cheat us out of joy, to break the chain?” she asks Altman, as though homosexuality is nothing more than a convenient weapon you stash in your back pocket to hurt your loved ones with when the time is right. Altman appreciates her freedom to not have to follow the strict rules of Judaism, but also recognizes what is then lost: not only her connection with Aunt Sylvia, but her connection with her ancestry as a whole.

Altman’s Jewish peers also falter in their devotion: A schoolmate happily displays her birth control, while a supposedly “frum” neighbor “rolls the tightest joints, acquires the best hash, buys the strongest quaaludes, drinks the darkest rum, and fucks the most yeshiva boys.” As a young person, Altman’s father clashes with his own father on religion; years later, he will serve his daughter Spam and buy her clothes that make her look like a WASP.

Altman, a well-known food blogger and previous memoirist (Poor Man’s Feast), can surely write. She can draw a reader deeply into a scene; her sentences sparkle with intelligence and literary beauty; and she has the gift of seeing the bigger meaning behind what others might consider small moments. She has a good sense of humor, too, though I wish this book were a better showcase for it. And then there is the problem of her wordiness:

Here, in the physical center of the house I share with my wife of fifteen years, there’s a Viking six-burner stove — it has old-fashioned dials and knobs, not the fancy digital dashboard that the salesman tried to convince us to buy; the words BAKE and BROIL have melted with time — sandwiched against a heavily used, stained yellow laminate countertop that wraps around a matching chipped yellow sink and a single-arm faucet stiff with years of lime buildup, set on top of birch veneer site-built cabinets that we painted white eight years ago.

Altman’s parents have a troubled marriage, which maybe isn’t so shocking considering that they dated just a few months. (“My father was sure he had found the love of his life, and his future. My mother was sure she had found a way out of her parents’ house, and her future.”) Altman’s mother specializes in passive-aggressive behavior, like playing with her food in a Chinese restaurant and sitting in a car when she should be visiting her husband’s parents. The only conclusion one can reach is that she is acting this way because she felt forced by society — once upon a time, women were looked down upon for being “old maids” — to enter into a marriage, any marriage.

There are moments in her parents’ marriage that are interesting, but I was far more intrigued by her adolescence; her father’s relationship to her; her relationship with Sylvia; her mother’s relationship with food; her grandmother’s love for both a woman and a Catholic boy, an old schoolmate; and above all, Altman’s orientation, and how that played out against the expectations her family had.

As I mentioned in the intro, Altman’s subtitle is “My Life as an Unorthodox Outlaw,” and it is that life I expected to learn more about. It is also that life, I sense, that is at the heart of a fascinating tale. Too bad it didn’t get more attention.