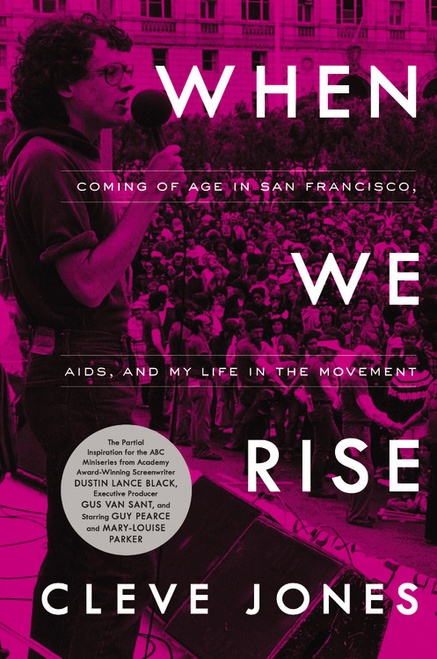 November is here, bringing with it a slew of new books to enjoy.

This month, Hachette Books is releasing When We Rise: My Life in the Movement, a new memoir from noted activist Cleve Jones.

Born in 1954, Cleve Jones was among the last generation of gay Americans who grew up wondering if there were others out there like himself. There were. Like thousands of other young people, Jones, nearly penniless, was drawn in the early 1970s to San Francisco, a city electrified by progressive politics and sexual freedom.

Jones found community–in the hotel rooms and ramshackle apartments shared by other young adventurers, in the city’s bathhouses and gay bars like The Stud, and in the burgeoning gay district, the Castro, where a New York transplant named Harvey Milk set up a camera shop, began shouting through his bullhorn, and soon became the nation’s most outspoken gay elected official. With Milk’s encouragement, Jones dove into politics and found his calling in “the movement.” When Milk was killed by an assassin’s bullet in 1978, Jones took up his mentor’s progressive mantle–only to see the arrival of AIDS transform his life once again.

By turns tender and uproarious–and written entirely in his own words–When We Rise is Jones’ account of his remarkable life. He chronicles the heartbreak of losing countless friends to AIDS, which very nearly killed him, too; his co-founding of the San Francisco AIDS Foundation during the terrifying early years of the epidemic; his conception of the AIDS Memorial Quilt, the largest community art project in history; the bewitching story of 1970s San Francisco and the magnetic spell it cast for thousands of young gay people and other misfits; and the harrowing, sexy, and sometimes hilarious stories of Cleve’s passionate relationships with friends and lovers during an era defined by both unprecedented freedom and possibility, and prejudice and violence alike.

It began in a bedroom in Naples, Florida, when a misbehaving punk teenager named Tom Gabel, armed with nothing but an acoustic guitar and a headful of anarchist politics, landed on a riff. Gabel formed Against Me! and rocketed the band from its scrappy beginnings-banging on a drum kit made of pickle buckets-to a major-label powerhouse that critics have called this generation’s The Clash. Since its inception in 1997, Against Me! has been one of punk’s most influential modern bands, but also one of its most divisive. With every notch the four-piece climbed in their career, they gained new fans while infuriating their old ones. They suffered legal woes, a revolving door of drummers, and a horde of angry, militant punks who called them “sellouts” and tried to sabotage their shows at every turn.

But underneath the public turmoil, something much greater occupied Gabel-a secret kept for 30 years, only acknowledged in the scrawled-out pages of personal journals and hidden in lyrics. Through a troubled childhood, delinquency, and struggles with drugs, Gabel was on a punishing search for identity. Not until May of 2012 did a Rolling Stone profile finally reveal it: Gabel is a transsexual, and would from then on be living as a woman under the name Laura Jane Grace.

Tranny is the intimate story of Against Me!’s enigmatic founder, weaving the narrative of the band’s history, as well as Grace’s, with dozens of never-before-seen entries from the piles of journals Grace kept. More than a typical music memoir about sex, drugs, and rock ‘n’ roll-although it certainly has plenty of that-Tranny is an inside look at one of the most remarkable stories in the history of rock. 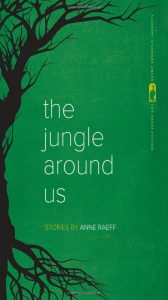 In At Danceteria and Other Stories (Squares and Rebels), writer Philp Dean Walker mixes humor and pathos to provide a wry snapshot of 80s’ culture:

In these immaculately crafted stories inspired by the 1980s, Philip Dean Walker spotlights a cast of celebrities and historical figures in situations unsettling as Day-Glo and poignant as roses while the specter of AIDS looms

This month sees the release of The Jungle Around Us (The University of Georgia Press), a provocative new short story collection from author Anne Raeff:

“You’ll see how beautiful it is in the morning―jungle all around us,” says one of the characters in Anne Raeff’s story collection, referring to the way that the jungle that threatens can also provide solace. The jungle in these stories is both metaphorical and real, taking the reader from war-torn Europe to Bolivia and from suburban New Jersey to Vietnam. Raeff examines how war and violence, like the jungle, seep into our lives, even when we are no longer in danger and long after the war is over.

While struggling with fear, danger, and displacement, the characters of The Jungle Around Us form strange and powerful bonds in distant and unlikely places. A family that has escaped Vienna ends up on the edge of the Amazon, where the parents fight yellow fever and the daughter falls in love with a village boy. Two sisters learn lessons about race and war during the Columbia University riots of1968. A young girl confronts death when her former babysitter is mysteriously murdered. In Paraguay, two adult sisters confront their loneliness while their precocious young charge faces off with a monkey. Raeff ’s stories are about embracing the world though the world contains everything we fear.

Bella Books is releasing Indomitable: The Life of Barbara Grier by Joanne Passet, a biography of legendary publisher Barbara Grier:

Barbara Grier—feminist, activist, publisher, and archivist—was many things to different people. Perhaps most well known as one of the founders of Naiad Press, Barbara’s unapologetic drive to make sure that lesbians everywhere had access to books with stories that reflected their lives in positive ways was legendary. Barbara changed the lives of thousands of women in her lifetime.

For the first time, historian Joanne Passet uncovers the controversial and often polarizing life of this firebrand editor and publisher with new and never before published letters, interviews, and other personal material from Grier’s own papers. Passet takes readers behind the scenes of The Ladder, offering a rare window onto the isolated and bereft lives lesbians experienced before the feminist movement and during the earliest days of gay political organizing. Through extensive letters between Grier and her friend novelist Jane Rule, Passet offers a virtual diary of this dramatic and repressive era. Passet also looks at Grier’s infamous “theft” of The Ladder’s mailing list, which in turn allowed her to launch and promote Naiad Press, the groundbreaking women’s publishing company she founded with partner Donna McBride in 1973. Naiad went on to become one of the leaders in gay and lesbian book publishing and for years helped sustain lesbian and feminist bookstores—and readers—across the country.