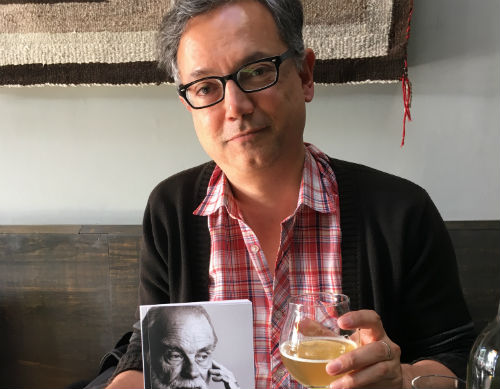 What books survive—or, at least, get reprinted and remembered? What makes something a classic of LBGTQ literature? A good example of the shifting whims of history and the book market is the work of writer Emma Donoghue. Many may know her as the author of Room and might assume that was her first book. In fact, she has been writing since the early 90s, but her earlier novels—considered classics by many— are out of print. Ken White was inspired to start Query Books after learning about this, creating the publishing company with the goal of republishing significant LGBT novels, biographies, and histories that have fallen out of print.

Ken worked at A Different Light Bookstore, followed by San Francisco State University Bookstore, and was most recently the manager of Books Inc. in the Castro. He has served on the boards of the American Booksellers Association and the Northern California Independent Booksellers Association. He currently is a member of the board of directors of the Book Industry Charitable Foundation.

Ken spoke to Lambda via email about the story behind the creation of Query Books and about the bookstores’ and booksellers’ central role in LGBTQ literature and bridging generation gaps.

In writing about how Query Books came to be, you mentioned a brunch for Emma Donoghue sparked the inspiration for this project. Can you expand on the story behind that moment and the creation of Query Books?

Sure. I was hosting Ms. Donoghue on behalf of the Books, Inc. events program. It was a brunch at a place in hipster Mission District called The Chapel; the book (Frog Music) was included along with your eggs and mimosas. She and I were simply having a bit of a chin-wag before being seated, and she happened to mention her mild frustration that her first novel Stir-Fry is out of print, even as her writing career is on the ascent. I was shocked, really, as it was a pretty good seller, as I recalled from my earlier days at A Different Light Bookstore in the Castro. On a whim, the next time I sat at my desk I looked up her books and those of several others, and it really surprised me what wasn’t in print anymore.

The Kickstarter for Query Books featured a lot of names throwing their support behind the project, names including Grace Towers, Jim Provenzano and Mx. Justin Vivian Bond. It also became a Kickstarter Staff Pick. What was the experience of putting out and managing the campaign? Were you surprised by the reception?

The Kickstarter campaign was one of the hardest things I’ve ever done in my life. I’m a big introvert, and putting my idea and my voice out there in such a big way…it’s really not like me at all! But I’ve got a supportive partner who has experience with fundraising, and some pretty cool friends who have lots of followers on social media. I may have teared up when I realized this Kickstarter thing was going to work! People are so enthusiastic about this idea, and that’s what this project needs.

You’ve had an extensive career in the book selling industry, from working at the famous A Different Light bookstore and at Books Inc, to serving on the board of a number of book-selling organizations. How do you think LGBTQ literature and the selling of said literature has changed over the years?

It’s changed quite a lot. What does the industry think “gay’” literature is now? What the big houses (and I’m thinking of a specific conversation I had with an editor at Penguin Random House) think is that, “we publish many authors, some of whom are LGBT, but we do not publish gay books;’ and what I think they mean is, ‘we are leaving all the male-male romance to middle-aged women writers who are largely self-published.”

That’s not what I mean. Sure, romance is great. But what I’m talking about if I say “LGBT book” is a novel or nonfiction book where LGBT identity is central to the theme and story: where queerness informs the development of a character; or is given a history by a scholar; or situated in a political space by a writer-activist. There’s more to it than “the writer happens to be gay.” To me, that’s permission to ignore who the writer is.

To come at the question another way: because of any number of factors that we can put under the umbrella of ‘market forces,’ specialty bookstores (including LGBT and women’s bookstores), and LGBT small presses, have had a pretty hard time of it since the end of the 1990s. So the industry itself is different now, and (online marketing notwithstanding) it’s much harder, I feel, to reach an audience for certain books, and therefore harder for a writer to develop as an artist or for them to grow sales. The missing link is the bookstore employee, who was the first reader of any book, who showcased the books they liked for their community of customers. Thank goddess they still exist, but there are fewer these days.

In some of the writing about the project, you’ve mentioned the LGBTQ generation gap but also a recent increase in interest in LGBTQ history. I have some thoughts, based on my own experiences, about the generation gap–I think it has to do with varying access to media and to people. However, I have been heartened that, amongst a portion of my generation, there is a shared curiosity in LGBTQ culture of past generations.

Can you talk about why you think there is a generational gap within the community, why there has been a renewed interest in LGBTQ history, and how Query Books might help to bridge the gap?

I love this question, and it’s something I’ve thought about quite a bit.

I used to think AIDS was the answer to this question. Certainly, we cannot know how large the effect has been of losing so many people before their time. It’s catastrophic. How much talent and knowledge did we lose? 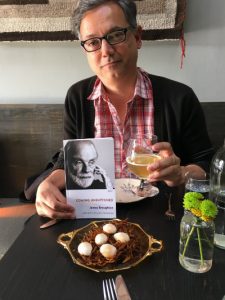 But I think the loss of LGBT bookstores really has a lot to do with it also. Think about it: gays, lesbians, bisexuals, and transgender people were almost completely invisible in the movies or on television, or even in newspapers and magazines. It wasn’t until LGBT people started producing their own media that we started to see consistent, positive images. But it would take until very recently for TV and cinema to catch up with what happened in books and magazines decades ago. In other words, nearly all LGBT culture only existed in print or at the bar. So when the queer bookstore disappears, where else can you find 40+ years of LGBT culture? (Hint: it’s not on Netflix.) And when those books are robbed of their rightful place in the market, they also risk being forgotten.

The first release from Query Books is Coming Unbuttoned, a memoir by James Broughton, an influential poet and film-maker. Why did you decide on his memoir to be the first book from Query Press?

Serendipity played a role, of course. My partner and I are acquainted with the filmmakers behind Big Joy: the Adventures of James Broughton. Not to mention, any number of our friends have associations with James or his lover Joel Singer, who has been hugely supportive of Query Books.

But it really fits the bill for what Query Books is about. Broughton’s life spanned an era where what ‘gay’ meant changed radically over mere decades. He knew dozens of famous and influential writers and artists, and was a gay spiritual godfather to so many more including Mark Thompson (Gay Spirit), who offered his writing as the Foreword to Coming Unbuttoned.

Mark recently passed away. I’m grateful that I can say, he saw a copy of the new Coming Unbuttoned with his Foreword, and left me the most beautiful message about how pleased he was to see it. He passed before I could return his phone call, unfortunately.

Would you be able to reveal any future books that Query Books plans to publish? Any books that you would love to republish?

I’m not sure what I should say about that! These are not titles that Query Books has acquired as yet, but I would love to republish Myra Beckinridge by Gore Vidal. (That’s one I simply cannot believe is out of print.) Ceremonies by Essex Hemphill is another; sadly nothing much has changed for African American gay men since he wrote that. Or Street Zen: the Life and Work of Issan Dorsey by David Schneider, which is not only well-written but is, among other things, a wonderful chronicle of early responses to the AIDS crisis in San Francisco.