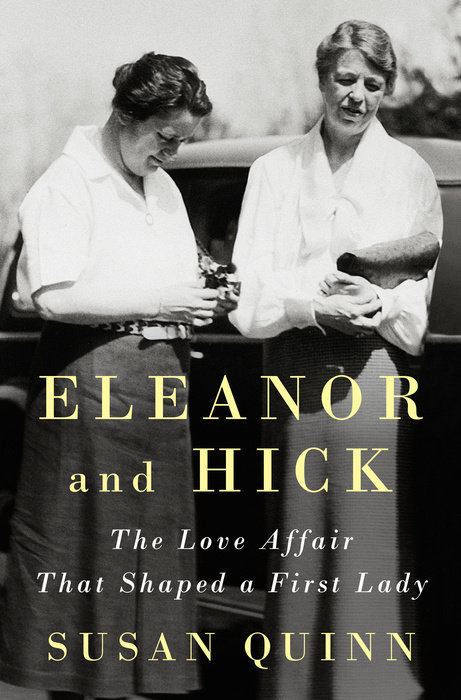 ‘Eleanor and Hick: The Love Affair That Shaped a First Lady’ by Susan Quinn

‘Eleanor and Hick: The Love Affair That Shaped a First Lady’ by Susan Quinn

In Quinn’s well-written and exhaustively researched book, Hick and Eleanor come across as a butch-femme Romeo and Juliet. They meet as a result of Hick covering the Roosevelts. Eleanor’s position and marriage obviously kept them from a complete relationship, but Quinn also argues that Eleanor’s devotion to others interfered too. Were Hick and Eleanor lovers? Quinn says we can never know for sure, though let’s just consider Exhibit A right here:

When they weren’t together, Eleanor and Hick wrote tenderly of their longing for one another. “Oh! How I wanted to put my arms around you in reality instead of in spirit,” Eleanor wrote Hick during the first year of their relationship. “I went and kissed your photograph instead and tears were in my eyes.”

“There have been times,” Hick wrote from San Francisco after they vacationed together out west in the summer of 1934, “when I’ve missed you so much that it has been like a physical pain, and at those times I’ve hated San Francisco because you were not there.”

Their relationship is not only a balm for them, but for the country: Eleanor gets Hick a job researching information about the Great Depression for Harry Hopkins, who worked with the president on the New Deal. One of her reports led to the creation of Arthurdale, a community that provided homes for those in the mining industry and their families.

The relationship eventually peters out and we get the sense Hick is the one who suffered more, emotionally speaking. She also sacrificed her job with the Associated Press–since her close relationship with the First Lady made it awkward to say the very least.

Though she has a juicy topic to work with, Quinn affords her subjects respect, and yet never puts them on too high a pedestal. We are forced to consider FDR, Hick, and Eleanor as actual people even when it makes us uncomfortable. (Let’s just say these three would never survive trial by social media.)

If you are not a history buff and just picking this one up for the relationship, you may find certain parts less interesting; still, Quinn does her best to make what some might consider dry history and politics accessible. The book’s rich detail and Quinn’s obvious passion will keep you turning the pages. It sounds cliche to say this, but when you are reading this book, you really do feel as if YOU ARE THERE.

Even with all the books previously published about this duo, I’m willing to bet many still don’t know who Lorena Hickok was. And her story, as Quinn shows here, is so, so important. Hick was a reporter when that wasn’t the fashion for a woman and a fairly obvious lesbian before Stonewall. She should be a much bigger feminist and dyke icon, and especially considering the last few weeks, I think we need her as inspiration now more than ever.

My Pink Cloud Phase: Jennifer Finney Boylan's Clarifying Guidance
How the Words of Nikky Finney Help Get Us Through Breaking Up & Breaking Down
‘Teaching the Cat to Sit’ by Michelle Theall