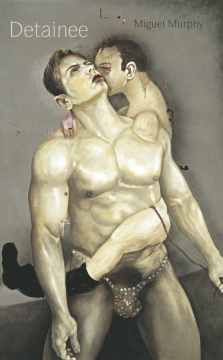 With his streams of rich imagery, Murphy reflects the “cante jondo” or “deep song” style (found in flamenco music of Spain) that Lorca so admired and tried to integrate into his poetry. This was a style of earthiness and passion, of the body and struggle.

Murphy’s are dark poems, drawing on dramatic juxtapositions of beauty to ugliness, the sublime to the demonic, and the grotesque to the familiar; assaulting the senses as they bring a brutality of language to the page. Murphy’s is the world of the gay painter Caravaggio, of Baroque art, which was characterized by great drama, rich, deep color, and intense light and dark shadows. As in “chiaroscuro,” a painting technique of the Baroque era, light and dark are boldly contrasted to create dramatic imagery. Murphy plays with a palette of sharply clashing images.

Like Genet, he plunges us into a world of sex and the violence. The male body and its desire are behind this explosive fury of language. In this, he is a descendant of Lorca, Genet, and Arenas, whose deeply sensual works took us to the shadow lands of homoerotic desire. It is a daring move. One that risks a laceration of the poems with operatic verismo. These are poems not for the faint of heart and may strike the modern ear as indulgent and overwrought, accustomed as we are to less stridency in our poetry.

The animalistic contrasted to the human is one constant in these poems as each poem is a maelstrom of primitive emotions. From the beginning of the collection, “Thorn” is addressed to a dog, an animal, which has harmed itself (?) and is now held in a hospital for animals. The “I” and “you” of the poem seems somewhat fluid alternating between beast and master, but the language is raw and sharp:

My eye never filled with blood.
I never asked why
I was drugged and held down. Mesmerized.
I wasn’t a two-headed dog: two faces
biting a squeal
in the University Hospital for Animals.
I never transformed daylight
dismembering doctors along dark nails.
I never growled
like you–never crouched in fear.
Tail, teeth, mouth eye, spine.
I never had power
when I was awake to flee.

In “Enjoy Flesh!” the second poem of the collection, we have:

If we want to embrace

absence, a cocktail
party will do. Fat olives. The dark sparkling
cherries dipped in rum. Drinks
splashing their brains
against the cold, blue-violet velvet
sky. Our loves, our loves never
come back & that is why in our sicknesses we don’t
know how to live with the dying
windows. Here is the last
tangerine light, its rind.

hold him in our arms & shave his head in our hands,
lying the fragile
collapsed husk of his body down
in the cool white sheets like our beloved
signing our curses upon his chest.

This is a theatrical language from another time but bridges seamlessly with the present. “We enjoy/our eyes dissolving like aspirin…” A pastiche of different vernaculars:

after lovemaking
the darknesses in the bodies we have known
O pale flickering
embrace. O Synapse of our deathsleep, unscathed.

Like countless gay artists before him, Murphy perfects an affectation that branded gay men as effete, drama queens. Men that knew their art history like the back of their hand and found in the melodramatic and the mannered a masque for their own gay voices.

But there is a sense of the confessional at work here, too. Murphy reveals glimpses of his childhood and family history. In “Summer of the Hatchet,” he tells us about “the mines in Colorado/ where they pulled my father & my father’s father/ from the pits, their lungs/ soaked with coal like wings of wet black gothic/ velvet.”

And in “Whose Hands He Worked” Murphy tells us:

an urge can make the reasonable
person inside
disappear–it was the way
I learned.

Contemporary language and events wend their way in and out of his work. In “Like Beauty” Murphy writes:

Admit it in the videogame
of the government’s boyish wars
the arcade blue crosshatch
of Tomahawks into Baghdad
unburies the moon’s neon thorns
its empty theatre of skulls
& the red black tatters of war. Nightmare
like Beauty admit it–The TV
muted because we wanted torture admit it…

This repetition of the phrase “admit it” throughout the remainder of the poem acts as a dramatic refrain and resonates with our own American denial of the horrors of the Iraq War.

The excessiveness, the intoxication, the Baroque ferocity in this work will not be to everyone’s taste. But no one can deny Murphy’s unique voice and supple lines, surprising as they are tortured, self-involved as they are expansive. These are dark interiors Murphy describes, caves of the heart, “That red/inner lining of the self, that stream/ shot through the skull, red jet/through a bullet’s/ hole.”

'Death of a Pirate King' by Josh Lanyon
'then, we were still living' by Michael Klein
'the lake has no saint' by Stacey Waite