Blacklight: ‘The Butcher’s Sons’ Investigates the Violent Bonds of Brotherhood

Blacklight: ‘The Butcher’s Sons’ Investigates the Violent Bonds of Brotherhood 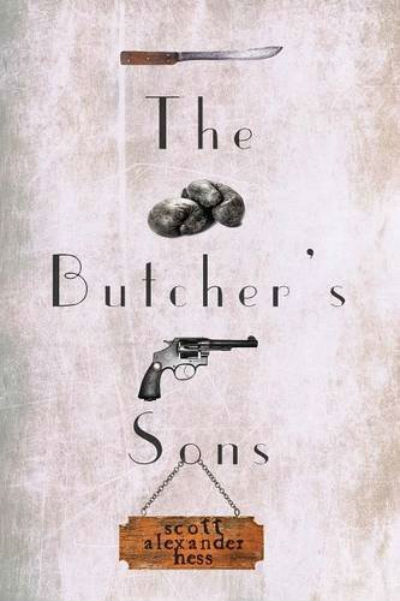 Scott Alexander Hess’ The Butcher’s Sons is not so much a crime novel in the traditional sense, as a novel about the violent bonds of brotherhood. Hess—author of three other New York based novels—tells a brutal and lyrically gorgeous story of three Irish brothers’ during the 1930s as they transgress social and moral norms to satisfy their desires, despite the dire consequences.

The brothers, Dickie, Walt, and Adlai, are sons and proprietors of a butcher shop in Hell’s Kitchen. Dickie equates masculinity with aggression and wants to earn the respect and admiration of other alpha-male mobsters in the neighborhood. Walt, a romantic, wants to marry the beautiful daughter of wealthy psychiatrist who adamantly refuses to allow his daughter to wed beneath her. Adlai, a slight sixteen-year-old, is gay and in love with an older, tougher man named Ed, a love which once consummated, both frees him and endangers him. The brothers push against social constraints to get what they want and, in doing so, become deeply enmeshed in a violent criminal underworld.

At the beginning of the novel, each brother is emotionally isolated from his siblings, struggling to find a path to what he wants, which in each case, is some form of social acceptance. As their behavior becomes riskier (even reckless), they draw closer to one another, but it’s not a closeness that’s safe or even pleasant. It’s magnetic, molecules slamming into molecules, and we begin to understand the true nature of their brotherly bond: a common grief—a dead mother and a weak, alcoholic father.

Hess seamlessly weaves these perspectives together with energetic and muscular prose. In a rather short space—250 pages—he’s able to show us the brothers’ complex interior lives without losing the reader. He places a letter written by the brothers’ great grandfather at the structural center of the novel, which their father, Pat, gives to Adlai, who he knows to be gay and therefore, he believes, best able to understand its significance. The letter is Adlai’s great-grandfather’s confession, the tortured lament of an absent parent, a guilt Pat shares with his grandfather. It serves as his confession too. He has raised his sons with little structure or empathy and has produced men who don’t understand how to relate to one another emotionally. Instead, they communicate with their bodies, with violence, with sex. Even Adlai, the most sensitive and vulnerable brother, communicates with his lover primarily through sex, their dialogue often brief, muted.

Hess describes acts of violence and sexual acts with visceral acuity, never slipping into cliché or sentimentality as he maintains a sober and tense atmosphere. He keeps the reader in the moment, glued to the page, even when we want to look away. In the place of extensive self-reflection, each brother’s emotional life is centered around a dream, which permits lyrical imagery to emerge amid the hard-hitting prose. That balance is necessary, a relief from the grit and sweat, an empathetic gesture on Hess’s part toward his characters, honoring their complexity. He shows us that these characters—even savage Dickie—are capable of tenderness.

‘Vow of Celibacy’ by Erin Judge
These are a Few of Our Favorite Things
Wayne Koestenbaum: The Horror and Fascination of Humiliation