‘You Only Live Twice: Sex, Death, and Transition’ by Chase Joynt and Mike Hoolboom

‘You Only Live Twice: Sex, Death, and Transition’ by Chase Joynt and Mike Hoolboom 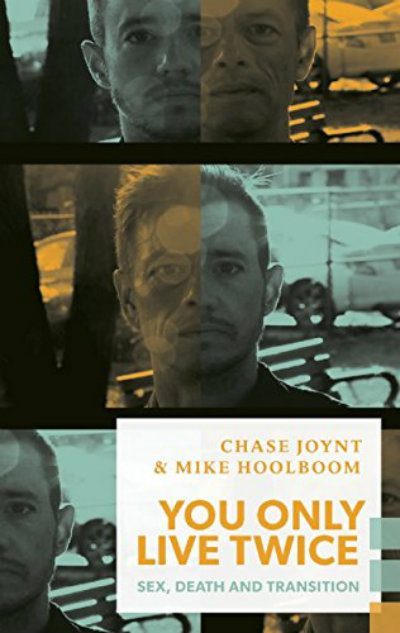 You Only Live Twice: Sex, Death, and Transition is a book co-authored by Mike Hoolbloom and Chase Joynt in which they explore major shifts in their lives–Hoolbloom’s serostatus and Joynt’s gender–through letters prompting each other to consider femininity, masculinity, sexuality, health, HIV/AIDS, community, and art-making.

Both born in the province of Ontario, Canada, Hoolboom and Joynt are artists who use film-making and writing to participate in conversations across cultural ecosystems. They move easily between mainstream concerns and siloed issues. Born in 1959, Hoolboom’s award-winning work, grounded primarily in the genre of short film, has long dealt with identity, belonging, and sexuality. Using voiceover, found footage, home videos, and other sources, he brings a sophisticated collage of sound and vision to the screen. His most iconic works, Frank’s Cock, Letters from Home, and Buffalo Death Mask, track the impact of HIV/AIDS on the individual and the larger community over the last three decades.

Joynt, born in 1981, uses concern of the person to examine systemic issues. Films like Between You and Me and I’m Yours, while different from each other, use people’s lived experiences to propel the work forward, leaving the viewer—and often the subject—to consider how we end up in the situations that make up our lives. In his academic work, Joynt is part of a generation of young scholars creating dialogue around trans issues in the academy and beyond. They each bring their differences and similarities to the book, producing a work that puts their lives and art in fruitful conversation with each other.

You Only Live Twice is comprised of three sections: “First Life,”” Transition,” and “Second Life.” Within these sections conversations are often themed in meta-like ways: “Father,” “Inside Out,” and “How Could You Ever Leave Me.” Form is informative here; Joynt and Hoolboom are rejecting binary “before and often” notions that structure transition narratives around gender and HIV. At one point Joynt writes, “If I were truly ‘beyond trans’—as a result of transitioning—I might not still think about my genitals every time I’m in the men’s room. If my transition belonged to the past, I might not still internalize other people’s mismanagement of my identity as being fault.” The book is rich with these shared and public explorations around the intersectional nature of being. What does it mean to change? What is it to witness change? Who is changed?

At the core of the book is a pair of men narrating their own lives as a means of witnessing and inquiring about the other. Early on Hoolboom writes, “Your movies consistently perform this gesture of turning things inside out, laying bare the technologies of family and intimate relations…It’s as if you’ve decided to live your private life in public. Do you ever worry you go too far or show too much?” Hoolboom is modeling here a shared curiosity produces on the page a palpable kinship between the men, one the reader is invited to be a part of.

At times, the tone of the book borders on a performance of the-men-at-the-dinner-party-doing-all-the-talking. For example, their shared admiration of the filmmaker Chris Maker creates language between the two that can feel exclusionary to those who don’t know Maker’s work. Additionally, many of the letters back and forth begin with throat-clearing statements that reframe what the other has previously written, resulting in some beautiful lines getting lost.

Readers, though, have the opportunity to wonder how performative the tone and sense of exclusion are. Form is again informative here. Historically, the epistolary form is linked to romance and horror, the latter genre famously producing a book about the creation of a hybrid man/monster (Mary Shelly’s Frankenstein), and another about the life and times of the undead (Bram Stocker’s Dracula). You Only Live Twice, with its back-and-forth structure, comes out at a time when visibility of trans folks and people living with HIV is higher than it has been in recent history, if not ever. Meanwhile, both communities are facing increased violence as seen in the epidemic of trans women (primarily women of color) being murdered, and the continued criminalization of people who live with HIV. The increased visibility is predicated primarily on notions of providing role models (Caitlyn Jenner) and heroes (the men of How to Survive a Plague), whereas the violence is rooted in a sense that trans folks and people living with HIV are not human or are not worthy of being treated as such. So what does it mean that someone living long-term with HIV and a trans man have produced an often-inward facing text about transition that refuses the usual tropes of transition narratives at a time of heightened visibility and violence?

Or to ask the question in other ways: can we read You Only Live Twice as an epistolary text aware of the form’s historic roots in producing monsters? Are Hoolboom and Joynt playing with form and tone in a self-aware way that moves beyond the need to be liked or legible, choosing instead to draw readers in through tension, tenacity, and the power of the word? The book is a literary endeavor no doubt, and given its creators, I think it can also be seen as an artistic intervention into the public commons around trans and HIV narratives. It pushes back against heroic or role model clichés; Instead, we are given the gift of two men bearing witness to each other in all their shared platitudes, epiphanies, confessions, and love. Along the way, we get to experience their many lives.

‘Vow of Celibacy’ by Erin Judge
'The Clothesline Swing' by Ahmad Danny Ramadan
'Fairyland: A Memoir of My Father' by Alysia Abbott