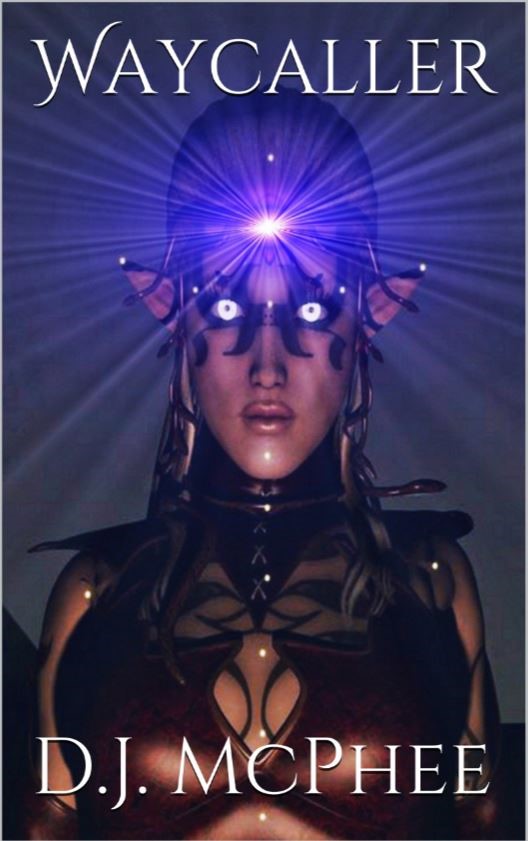 Jack Gordon thinks he’s going mad. The same thing happened to his mother, who believed in magic (and elves and dragons and monsters). Jack is understandably ashamed of his mother’s madness, and of the terrible crime she committed years earlier, before disappearing from his life forever.

This is the starting premise of Waycaller, a fantasy novel written by D.J. McPhee. Fantasy novels don’t get much space in review pages, especially LGBT review pages. Waycaller deserves this space because it’s a fantasy novel (for both young adults and fully-fledged ones) that includes a rich diversity of characters. Something fantasy readers have been wanting for a very long time. A lot of fantasy is whiter and straighter than a church picnic in Maine (the whitest state in America, 96.9%). This is especially true of fantasy in the tradition of J.R.R Tolkien, commonly referred to as sword and sorcery or epic fantasy. Waycaller turns that on its head with strong female characters, a host of non-white characters and even an elvish bisexual.

Waycaller begins with Jack Gordon (good-looking, aloof, 16) hearing voices. Actually, it starts with Jack kissing a girl, and then walking home his little sister, Harriett (scruffy-looking, tomboy, 11). This opening scene is just establishing who Jack and Harriett are, and they’re both very likeable, though very different.

Just a few pages in the action starts. Jack and Harriett are attacked by a monster who even Jack cannot deny is real. A fast-paced chase follows. Then a voice in Jack’s head tells him how he can save himself and Harriett from the monster. Next minute, Jack and Harriett are magically transported to another place. Writing it down like that makes it sound cheesy, but it’s not. It’s classic portal fantasy done with a lot of finesse. This other world is Anwynn, a continent veiled or hidden from the rest of the world. Anwynn is loosely based on Celtic mythology. There are druids and elves and dragons, but there are also people of every possible racial hue. Almost all the strong characters are women. It sounds like heresy, but even the head of the druids is a black woman. And it works. It works tantalisingly well. Waycaller is the fantasy novel we’ve been craving, that Game of Thrones and Harry Potter failed to deliver – a fantasy world with diverse characters that doesn’t rely on violence and sex or adolescent anglophillia to hook readers in.

From the minute Jack and Harriett arrive in Anwynn, they are on the back foot, in imminent danger. They have to face the fact that elves, dragons and druids are real, and that they are not who or what they thought they were. Jack is a Waycaller. He has the power to part the veil between Anwynn and the human realm. Readers will have to wait and see what Harriett’s got in store for them, it’s unexpected and exciting.

Jack and Harriett face the challenges that come with being in an unfamiliar world that is as dangerous as it is magical with steadfastness and humour. Harriett is a seriously funny character. To survive in Anwynn, Jack in particular must overcome his doubts and fears and learn to accept and use the power that resides within him (typical fantasy stuff, but this is so well-written it reads as fresh).

Coming to terms with who he is might be a little easier if Jack wasn’t also struggling with his feelings for the mysterious Anarra, a part-elvish girl whose beauty is matched only by her skill with a sword. Or if another elvish dude of the bisexual variety wasn’t on his mind so much. In the Waycaller world elves fall in love only once and forever. It’s called twining. In twining gender doesn’t play much of a part. Without saying too much, the twining is something Jack has to come to terms with.

Combining traditional fantasy elements, humour and intrigue, Waycaller makes epic fantasy accessible to today’s readers without alienating old-school fans of the genre. In a nod to the internet age there’s even a website with video trailers and additional material to supplement the novel (www.waycaller.com).

Some readers have complained that Waycaller was released as a serial (in seven novella-sized instalments or episodes). This wasn’t a problem for me. I purchased all seven episodes at once (they’re all available on Amazon) and read them in sequence. If anything, this is real value for money. There is a total of 120 thousand words in the seven parts, enough story to fill two standard-sized novels easily.

Waycaller is terrifically written. It’s an engaging, interesting and wholly enjoyable read. The pace is perfect, the storylines, though sometimes intricate, are all absorbing and rewarding. The author has achieved a rare accomplishment: remained faithful to the epic fantasy genre and delivered diversity without compromising believability or story. The world of Waycaller is familiar rather than new but that is not a weakness. Reading Waycaller is like visiting a world you’re familiar with and love but meeting a whole lot of interesting, fascinating and likeable new people. That should be every fantasy writer’s goal.

D.J. McPhee updates the epic fantasy novel with easy-to-read language and engaging, identifiable characters. Not since the Harry Potter books have I found myself so enamoured with a set of characters. Waycaller is as rich as the Potter books in that sense, but much more diverse. That makes these books as good if not better than Rowling’s series (don’t stone me, it’s just my opinion). Fans of Lord of the Rings and The Hobbit will appreciate (if not love) Waycaller. All in all, Waycaller breathes life back into the genre and delivers where so much other Tolkien inspired fantasy doesn’t.

Ben Mason is a freelance book and film reviewer. His particular interests are in travel writing and memoir. He has reviewed for a number of publications including Queesnlad Pride and Qnet.