‘The Shirley Jackson Project: Comics Inspired by Her Life and Her Work’ Edited by Robert Kirby

‘The Shirley Jackson Project: Comics Inspired by Her Life and Her Work’ Edited by Robert Kirby 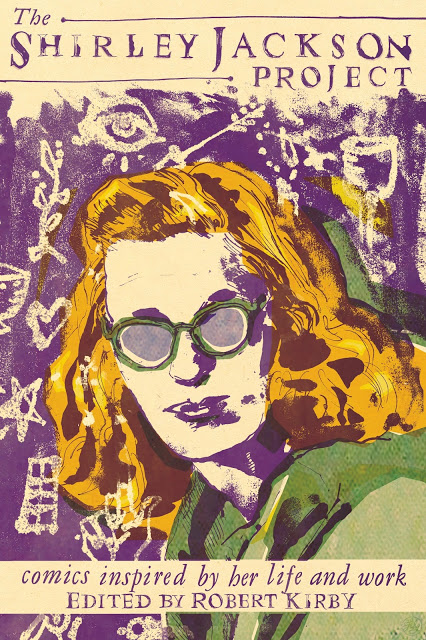 For a generation of high school students, from the fifties to the seventies, Shirley Jackson’s story “The Lottery” was a beacon of dark light in a bland curriculum. Like Poe’s short stories, it was literary enough for teachers to include it, while it’s message carried a Twilight Zone punch shocking enough for adult readers to want the story banned. Jackson’s tale of small-town judgment found its roots in the Puritanical vigilance of the Salem Witch Trials, but is surprisingly relevant now, in a culture that eschews stoning as primitive, but avidly flings pointed tweets and shaming verdicts via social media.

Jackson was a prolific writer. Her work included tales of both domestic horror and humor in housewifery and childrearing, a la Erma Bombeck, a dichotomy many of readers found puzzling. Ruth Franklin’s recent bio, Shirley Jackson: A Rather Haunted Life fills in some of the gaps. Despite Jackson’s talent, she lived in a time when women were judged by their husbands, their looks, and their husband’s salaries. Jackson often made more than her husband, critic Stanley Hyman; not only did she support the family, she ran the household and raised their four children. Hyman cheated on her and she felt deeply shamed by her own mother, who harassed her, calling her ugly and overweight, despite her world fame as an author. Depressed and frustrated, Jackson tried to squelch her pain with cigarettes, booze, and pills. It’s the stuff of Madmen without the makeup, backed by a soundtrack of the Rolling Stones “Mother’s Little Helpers” and “19th Nervous Breakdown.”

Much of the darkness of Jackson’s stories emanates from these stuffed anxieties of post-war America, and the strict gender roles of the fifties and sixties. Jackson turned everyday domestic norms–houses, jobs, a trip to the dentist–into horror stories by exposing the hidden sexism, racism, and anti-Semitism lurking under a blanket of conformity.

The black and white artwork is stellar throughout, and adds a fitting somber note. From Annie Murphy’s spiral staircase (or is it a spiral of DNA?) to Robert Triptow’s penciled sketches of a suburban haunted house, the artwork holds its own.

This isn’t a book for readers unfamiliar with Jackson’s work; you can’t read these comics without wanting to know more about both her creations and her life (the inclusion of a bibliography encourages this too). It would make a superb text for any class studying her work, Mid-Century modern culture, or feminist literature. This is an exquisite example of how comics could be incorporated into academia and used to teach in a way traditional textbooks fail. Shirley Jackson, domestic horror, and female horror writer’s fans–snatch this up! But I strongly recommend academic libraries adding it to their collections as well.

A Look at LGBTQ Homeless Teens: Read an Excerpt from Ryan Berg's 'No House To Call My Home'
'Lie With Me' by Philippe Besson, Translated by Molly Ringwald
'The Suiciders' by Travis Jeppesen