‘Red Lipstick: The Men in My Life’ by Laxmi and Pooja Pande

‘Red Lipstick: The Men in My Life’ by Laxmi and Pooja Pande 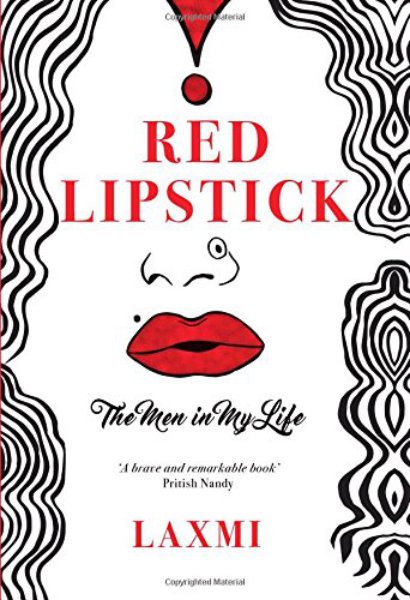 Hijras have lived at the margins of Indian society for centuries, struggling for acceptance in the face of victimization and oppression. Few portraits of India’s trans community let them be the agents and the narrators of their own stories.

Writer Pooja Pande’s decision to make Laxmi Narayan Tripathi, a prominent trans activist, the author of Red Lipstick: The Men in My Life, is therefore a political act. Not quite a memoir and not a biography, Red Lipstick illuminates the unique experiences of one hijra’s relationships with the men—some supportive, others more cruel—who have made her life a textural palimpsest of masculinities.

“I would say most of my relationships, if not all,” says Tripathi in the book, “have been on my terms.”

In Pande’s words, Red Lipstick set out to “mess with patriarchy.” Tripathi captures this subversive spirit in a memorable passage: “I am the epitome of sluthood—I can be the ultimate seductress and I can also suddenly become otherworldly, divine and naive. I’m like a serpent, slippery.” Tripathi’s unique and haunting power is the ability to use her femininity in order to manipulate men and bring them to their knees.

This is the lasting power of this narrative in the genres of narrative non-fiction and LGBT memoirs. Tripathi is a compelling, determined, and fundamentally likeable woman who teaches us how to endure, how to make those in power bend to the subaltern figure.

Hijras are born biologically male, but reject their masculine identity, identifying instead as either women, somewhere between men and women, or neither men nor women. Most forms of employment remain unavailable to hijras, thereby preventing any upward mobility. Sex work, performance, and begging are often the only accessible occupations for them to choose.

During their initial meeting, Tripathi told Pande “she wanted to write a book about dicks.” Red Lipstick is precisely about those members and the unpleasant men they belong to. Some of these men are lovers who have taught Tripathi the meaning of sacrifice, or they are sisters in the fight for LGBT rights, or they are the abusive men who have threatened to obliterate her.

Pande’s decision to link the men in Tripathi’s life to Hindu mythological figures is significant. These lodes ground Tripathi’s understanding of her own experiences within a deeper context of divine stories and ancient roles—creator, preserver, destroyer. Who are these men to her in the larger cosmic order of things? Readers cannot help but ask whether these are men they encounter in our own daily lives.

Red Lipstick demonstrates how a hijra, born as a male, can embody both masculine and feminine characteristics to challenge and disrupt ingrained patriarchal violence. Tripathi’s narrative offers a narrative and a model, at a crucial time for gender-based violence in India, for championing the rights of the country’s most disadvantaged social groups.

Because she makes Tripathi an author, Pande demonstrates the literary and epistemological possibilities of a collaborative spirit between informant and journalist. The book’s voice throughout is Tripathi’s. Her voice and her stories project a particular combination of defiance and fragility. Many know Tripathi as a fiery activist. But Tripathi is also revealed as equally vulnerable, burned, and broken. Such an aesthetic decision is the greatest gift of Pande’s book.

All the words are Tripathi’s and her friends’. But the passages, which arose from the year-long conversations Pande had with her informants, reflect Pande’s intensive transcribing, sifting, and careful editing. While easing into the right voice, or voices, for each of her subjects was for Pande no easy task, the result is a successful and sensitive portrayal of all the personae embodied in Tripathi and the men imbued inside her.

Activism, Tripathi makes clear, is her main role and responsibility. It’s how she remains resolute and committed to her fight for the rights of LGBT people. What’s more, Tripathi as activist and Pande as writer share similar aims. They both seek to inhabit a world that doesn’t “impose a prescribed identity onto anyone.”

Red Lipstick allows other points of view to come through—specifically, the men who know Tripathi and who have either fought with or alongside her. Ultimately, however, the singular voice that shines through is that of Laxmi Narayan Tripathi—a woman who lives unapologetically and on her own terms.

'Since I Lay My Burden Down' by Brontez Purnell
‘Lawfully Wedded Husband: How My Gay Marriage Will Save the American Family’ by Joel Derfner
'Dreaming in French: The Paris Years of Jacqueline Bouvier Kennedy, Susan Sontag, and Angela Davis'

Rajat Singh is an essayist living in New York. He is working on a collection of essays on queer melancholy and is a contributor at Catapult. He has been an artist resident at the Spruceton Inn, a Tin House Summer Fellow, and a Lambda Literary Fellow.