‘In the Empire of the Air: The Poems of Donald Britton’ Edited by Reginald Shepherd and Philip Clark

‘In the Empire of the Air: The Poems of Donald Britton’ Edited by Reginald Shepherd and Philip Clark 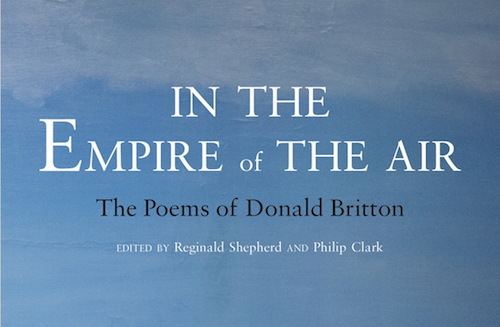 Donald Britton had only one book of poetry—Italy—published during his brief life, which was cut short by AIDS in 1994 when he was 43. He was known as a self-deprecating perfectionist. For some, perfectionism is an excuse for not writing; for Britton, it meant that he wasn’t prolific, but what he produced with great care and labor was near perfection. In the Empire of the Air: The Poems of Donald Britton, edited by Reginald Shepherd and Philip Clark, is a delectable volume of poetry-concentrate, dense with previously unpublished and uncollected works that immortalize Britton as a self-effacing poet whose sparkling yet understated language can devastate as he crystalizes intimate revelations about love, sex, and the temporality of our flitting time on earth.

Britton emerged in the early 1980s from the third generation of the New York School of poets, many of them gay (Joe Brainard, Dennis Cooper, Douglas Crase, Tim Dlugos, and Kenward Elmslie among them). His mentor and strongest influence was John Ashbery. In “Valentine,” written for his last lover, David Cobb Craig, Britton describes the indescribable depth of communication between two people in love:

At first we had ways of talking

That filled up the evening

Until some things could be said. It was a made-up

Situation in which lives could be lost.

Whatever that was now grows inside

The originality and beauty of his depictions of nature, angst and desire cause one to gasp: “or fog rolls in / like a trashcan / soundless / at your feet—” (“All Saints’ Eve”); “This end of the world feeling / October installs in the sunlight” (“Plusieurs Jours”); “scrawny / winter sparrows like half- / notes on the fire escape” (“Unattached”). The pain of desire and longing in the poem “Unattached” is devastating:

have a way of knowing what we want

and putting in the closet

and swallowing the key, as if

our opportunities for being

rejected. How many “Ah-ha!”

responses, after all, can any of us

endure in the course of a season?

up out of the disintegration

of other things, a shape

into which masses of watery

light are poured. My love

exists to prove you impossible.

When Britton describes the death of desire in “Nancy to Sluggo,” his wry sense of humor shines: “Your bristled / dome / now fails to amuse, arouse / as in the past / I remarked / it did.”

In many of the poems Britton contemplates the temporality of our rented time on earth. They are prescient, as they were written before he was diagnosed. Were they composed with the fear that he had the virus or merely a poet’s obsession with the dissolution of the body and the art left behind? The title “In the Empire of the Air” is from a 16th-century French poem translated into English as “The Amorous Zodiac.” It’s the poet’s lament that he cannot forever remain in contemplation of his love but must evaporate into “the empire of the air.”

Edmund White lauded Britton for inventing “the tourism of the mind”: Britton characterized his poems as a way “to project oneself toward that point where one’s words cease to comment on any experience, but become an experience in and of themselves: empty of discursive content, perhaps but full of all manner of things language wants to say, but people usually don’t.” Consider the last lines of “In the Empire of the Air” as an example of Britton’s ability to enact “tourism of the mind” through his use of language:

And all I said and did, and all the time

It took me to get here, so much I forgot

The purpose of my visit, but kept on anyway; to me,

As I hold you, and the messy edges

Think of me as three persons, and as one,

But always who I am, ever changing

And complete, in the empire of the air

Or on the street, or with white sails

Stiff against the wind,

Whistling far out over the water.

In the book’s introduction, Shepherd writes: “Work dies if it isn’t read (though like Sleeping Beauty or Snow White it can be awakened by a reader’s kiss).” Although Britton is “in the empire of the air,” the reader’s kiss will hopefully keep his masterful poetry alive.

Jamie Brickhouse is a writer, performer, and the author of the critically acclaimed Dangerous When Wet: A Memoir of Booze Sex and My Mother (St. Martin’s Press). It’s “Required Reading” in Mary Karr’s The Art of Memoir; Amazon named it a “Best Book of May 2015,” and Book Chase named it a “2015 Nonfiction Top 10.” He has been published in The New York Times, International Herald Tribune, Washington Post, The Daily Beast, Salon, Out, Amtrak’s Arrive, and the Huffington Post and is a guest blogger for POZ. Brickhouse is a two-time Moth StorySLAM champion, Literary Death Match champion, and performs stories and a solo show based on Dangerous When Wet. Follow him on Twitter @jamiebrickhouse, friend him on Facebook, or visit www.jamiebrickhouse.com.