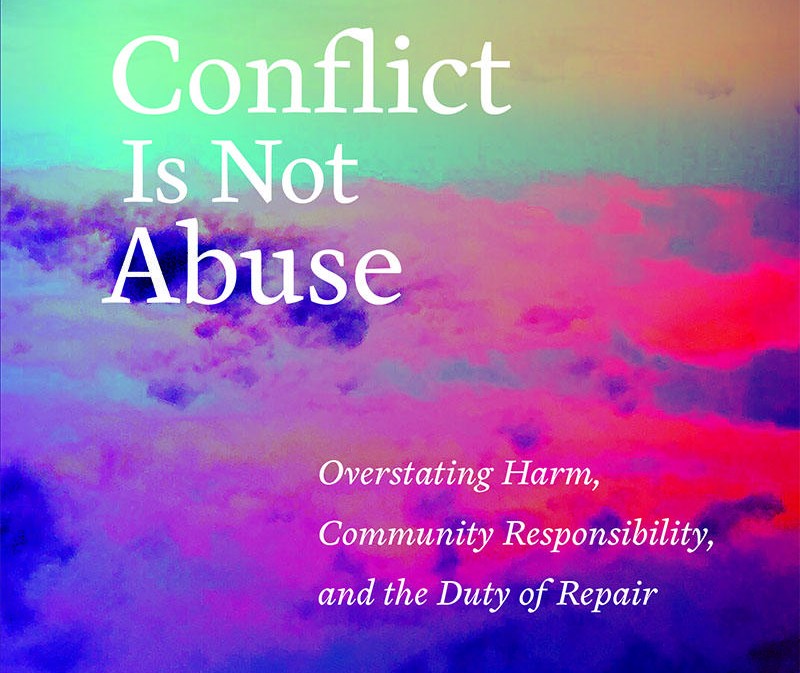 ‘Conflict Is Not Abuse: Overstating Harm, Community Responsibility, and the Duty of Repair’ by Sarah Schulman

‘Conflict Is Not Abuse: Overstating Harm, Community Responsibility, and the Duty of Repair’ by Sarah Schulman 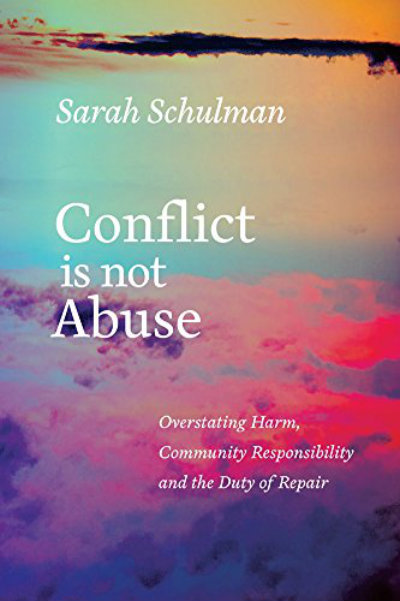 With a sturdy title like Conflict Is Not Abuse: Overstating Harm, Community Responsibility, and the Duty of Repair, a book is destined to raise a few eyebrows before its spine is cracked. Because of this, it becomes critical to address, even prior to the text’s actual subject matter, what Sarah Schulman’s eighteenth book is not: Conflict a not a 288-page treatise against the mercurial trigger warning. It does not recklessly attempt to redefine abuse. Nor is Conflict a character assault on survivors of violence, living or dead.

With that out of the way, there is ample breathing room to address what Conflict is: inspired in part by the much-respected LCSW Catherine Hodes’ course “Is it Conflict or Abuse: Differential Assessment and Response,” the book leaves abuse to its experts and the recovery industry, instead sharply hones in on conflict.

Always conversational, Schulman observes the ways in which micro and macro instances of conflict can escalate in devastating directions, particularly when one or both parties summon the state’s “arbiters of violence”––its inept local authorities, governments, and militaries––to mediate a challenging situation. Using the language of her colleague Matt Brim, Schulman urges that the conflicted, their truest friends, and their allies hold a radical power in such disputes; they are the ones who are best-poised to resolve conflict, be it intra- or inter- community:

…when we are in the realm of Conflict, we can move from the Abuse-based construction of perpetrator and victim to the more accurate recognition of the parties as the conflicted, each with legitimate concerns and legitimate rights that must be considered in order to produce just resolution.

In Hodes’ course, students are given scenario after scenario to interrogate as being abusive or conflicted. In knowing the difference, social workers are able to perform accurate assessment, treatment referral, and––hopefully––restore peace. In Conflict, Schulman offers similar, layman’s case studies on the ‘conflict’ side of that coin. In addition to her own 58 years of life experience, Schulman’s argument is informed by peers, nonprofit executive directors, queer theorists, gurus, and the likes of late German psychiatrist Edith Weigert. By consistently using phrases such as “Overstatement of Harm,” “False Accusations of Blame,” “Shunning and Exclusion” to explain the origins of a conflict, the author instills the objective lens of dispute assessment in the reader.

Conflict’s three sections dissect these countless instances of conflict escalation, exploring harm reduction strategies and alternate methods of repair. They include the historical and personal, from the ongoing criminalization of HIV-positive Canadians to the author’s own roughing-up by an ostracized person of color at a writing retreat.

And how to resolve conflict? Schulman’s no snake oil saleswoman, this is no self-help paperback, and there is no one clear answer to this question. In addition to being held accountable by one’s closest confidants, Schulman does stress the importance of tangible conversations between conflicted parties, be they in-person or over the phone; mediums that allow for little hiding, avoidance, or fear of being too much. While this could easily seem like a disquisition against our increased digitalism, Schulman is an advocate of these pixelated worlds herself, recounting the devastating attack on Gaza by Israel in 2014 through 60 pages of Twitter and Facebook commentary. Through this copy-pasted timeline, readers are able to pinpoint the moments where Israel experienced conflict and violently overreacted in the direction of the Gaza Strip. Given major media’s abandonment of coverage of the attack, it would’ve been impossible to know what was happening in Palestine––or the commentary it inspired––were it not for this technology.

It bears mentioning that I began reading Conflict the day that a prominent white media maven accused a Black athlete of looking at her inappropriately at a gala: by, tragicomically enough, not looking. I completed the book the same day that Terrence Crutcher was murdered at the hands of a white policewoman in Tulsa, Oklahoma. By the time I began this review, news was breaking that a police officer in Jasper, Georgia, another white woman, had lied about being shot by a Black man while on duty, jeopardizing peripheral lives of color and taxpayer resources.

It was in this personally relevant whirlwind of a moment that I experienced the scenarios posited by Conflict. I felt relief to discover that Schulman, writing from an intersectional, anti-supremacist position, not only addresses this systematic “Overstatement of Harm” against Black bodies, but through one of the most micro and universal sorts of conflict a body can experience; that between the desiring and the desired:

…being falsely accused of desire also has its own more extended history, one more deeply rooted in race. There is already a long, known tradition of white people repeatedly concocting accusations of desire to justify specifically racial violence. Black men, as we all know, have been lynched, tortured, castrated, incarcerated, and murdered by the white state since they were brought to the continent as slaves, and one of the chief channels has been through the false accusation that they desired white women.

For this reason, Conflict’s publication could not be timelier. Readers, regardless of their position in our upheaving contemporary world, will find themselves latching onto specific examples of conflict within the text, be it a lover’s quarrel that ends in violence and state involvement, ACT-UP’s battle with the American pharmaceutical industry, or an anecdote about an troublingly infatuated thesis advisee––and, in the effort to bring more integrity to one’s interactions, interrogating one’s proximity to supremacy and reactions to conflict. No one is exempt from irrational responses, Schulman argues, the Traumatized and the Supremacist’s reactions running parallel despite bearing very different consequences.

However, this idea that Conflict offers “something for everyone” inevitably means that it runs the risk of being “too much for one.” While the personal anecdotes that inform Schulman’s argument are often wry and entertaining (her description of mindfulness teacher Tara Brach is comedic gold, and the recounting of a flirty, G-spot obsessed acquaintance easily hearkens back to Schulman’s sexiest lesbian fiction), readers may find themselves a bit pestered by their relentlessness––does an anti-racist activist in Biloxi, Mississippi seeking insight into disrupting intra-organizational conflict, for example, really need to know that the author spoke about an earlier version of this book at the Vulva Club in Berlin? And while Schulman readily makes her own mis/handlings of conflict readily available in Conflict’s pages, how will an anecdote in which the author schools a young rape survivor into admiration sit with younger feminist readers who may be in theoretical agreement with Schulman regarding conflict, but consistently bear the brunt of generational condescension?

The author seems aware of this possibility. “This is not a book to be agreed with, an exhibition of evidence or display of proof,” Schulman writes in her introduction. “Like authentic, conscious relationships, truly progressive communities, responsible citizenship, and real friendship, and like the peace-making that all these require, it asks you to be interactive.”

If anything, Conflict is sharply observant and relevant text that is already getting its wish for action granted.