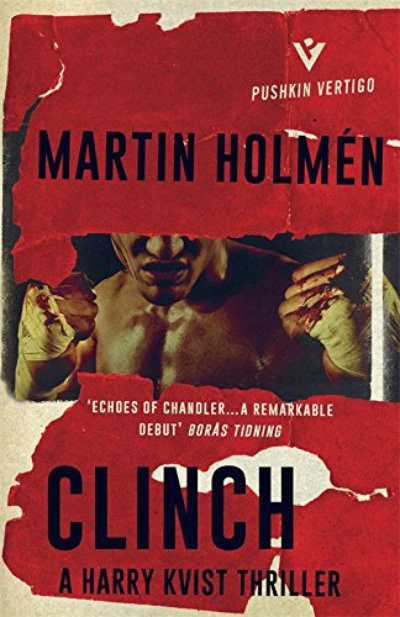 Clinch, the first in the Kvist series by Martin Holmén, is a vivid, blood-soaked noir, set in 1930s Stockholm. Its anti-hero, Harry Kvist, an infamous ex-boxer, now scrapes by as a debt collector. A wolfish bisexual, he blends desire and violence in most of his intimate relationships. He is equal parts sexy, repellant, and compelling, if frustratingly unknowable.

Shortly after Kvist physically threatens a debtor named Zetterberg, Zetterberg is found dead, and Kvist is the primary suspect. An eye witness, a prostitute named Sonja, holds the key to identifying the killer. Kvist must climb through the city’s grungiest, most impoverished slums and into its most highbrow establishments to find the illusive Sonja and avoid prison. Along the way he meets a series of thugs, whores, gays, and other inhabitants of Stockholm’s lush noir landscape. Eventually, he becomes romantically entangled with Doris Steiner, a retired silent film actress turned drug-addled socialite. True to the sub-genre, as the plot unfolds and Kvist emerges from the grimy streets into the luxurious restaurants and living rooms, he gets closer to the truth and to clearing his name, leaving a trail of broken bones and spilt blood.

Holmén is a gifted writer and clearly a devotee of classic noir. Kvist’s detailed and richly metaphorical observations echo the sensibilities of Chandler’s Marlowe. His brutal exchanges, whether in hand-to-hand combat with a thug or sex with young male lover, are reminiscent of Spillane’s Hammer. Stockholm itself is a character. In nearly every scene, the city haunts, frustrates, and intrudes on Kvist. He hears the stark sonorous chime of church bells, the smell of lignite and burning birch wood in the air, and muffle of the deep snow. He is endlessly assailed by weather, noise, and commotion; he yearns for connection through sex or through violence or through some mixture of the two; he stares deeply at the city and the city glares back. The opening line “There is nothing here but hatred,” and by the end of the novel, you believe he means it.

Holmén saturates the novel with period atmosphere, integrating historical details smoothly, never allowing his extensive research to be distracting. His style is as physical and gloomy and graphic as his hero. His plot, a variation on the traditional hard-boiled detective narrative, is serviceable, but not unique. This isn’t a twisty page-turner, but a voyage through darkness. Holmén seems to be more interested in creating a palpable, corporeal experience for the reader, not a cerebral whodunit.

Clinch is an immersive read, but not an entirely satisfying one. Despite a few glimmers of a backstory—his drinking binges, Kvist’s absent wife and dead daughter—Holmén keeps Kvist’s internal life from the reader. Maybe Kvist isn’t capable of much self-reflection. Perhaps accessing his emotions stirs up too many vulnerabilities, so they remain buried deep, beyond reach. This, of course, is in keeping with his predecessors, Marlowe and Hammer, but I hungered for more reflection. Perhaps if Holmén had written in another character, she or he or they could’ve cracked his hard shell. Doris Steiner, although fascinating and fabulous, doesn’t accomplish this; she herself stylized and aloof. Kvist is motivated by self-preservation, not a clearly defined of sense justice, so we don’t have moral code as common ground. As Holmén continues to develop his hero through the series, I hope he’ll continue to wrap us in that same dreary world, but strike a match on Kvist’s shadowy interior and show us what’s there.

Boycotting Arizona: Authors Cry Out Against SB 1070
'My Brother’s Husband' by Gengoroh Tagame
When I Call Myself Bisexual