‘The Stormwater Drains in Canberra’ by Paul Johan Karlsen

‘The Stormwater Drains in Canberra’ by Paul Johan Karlsen 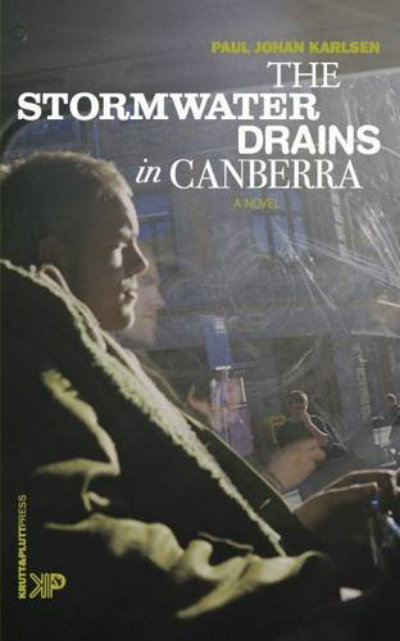 According to one online Norwegian newspaper, Norway is the most gay-friendly Nordic country. Homosexual activity in Norway has been legal since 1972, and the age of consent for gay males is sixteen years old. At the same time, Norwegians tend to follow the Jante Law, an old Calvinist code imported from Denmark that strongly discourages people from standing out in any way, including in their sexual activities and relationships. This is why we have to cheer on Kurt Larsen, the young hero of Paul Johan Karlsen’s novel The Stormwater Drains in Canberra.

As a fourteen year old youth, there are many ways in which Kurt does not want to stand out. He is tall for his age, with a large Adam’s apple that makes him feel self-conscious and affects his voice. During this gawky, awkward time, his sexual awakening takes place. Going to great lengths to hide his homosexual feelings from his parents and classmates, Kurt secretly opens a mailbox at the local post office in his small town and places personal ads in porn magazines. Posing as an adult, Kurt searches for “boy fun” and anonymous hookups with strange men. His journey as a “sexual pioneer” takes him from his small Norwegian town of Bødø above the Arctic Circle, to university, to international travel, in search of “sexual perfection.”

It takes some courage for a young Norwegian man from a small town to travel around the world for gay sex. After his first year of university, Kurt qualifies for five free airline tickets to go anywhere around the world during a twelve month time period. Kurt’s itinerary intersects with those of Ragnar and Jonny—two young men who had captured his fancy back in Bødø. While Kurt might have left his small northern town, his unresolved feelings for these two boys from back home travel with him. Over the course of the story, Kurt addresses handsome Ragnar in his earnest, longing narrative, but the plainer Jonny is the one always close. While other boys and men appear in the story, Kurt appears to have the most affinity for who is most like himself.

Karlsen—a psychology professor at the University of Trømsø in Norway—writes this book in part to address the ways that social media have made it easier for gay men to find each other. Gaysir, a popular online gay man’s news and personals site in Norway, thanked Karlsen for immortalizing them in his novel. At the same time, Karlsen believes that over-dependence on social media can make people focus on shallow appearances, leaving people empty and even lonelier than before. The greatest challenge that Kurt faces in his quest for sexual perfection is understanding his emotions and those of the young men with whom he wishes to connect. This emotional awakening takes time and maturity, which is why Karlsen tells Kurt’s life story over the span of seven years, from fourteen to twenty one.

Stormwater Drains in Canberra took Karlsen thirteen years to write. It seems a strange title for this Norwegian story, but Karlsen uses the stormwater drains as a metaphor for the overpowering sexual drives within us that many people view as dirty and would rather not discuss. Unfortunately, the drains do get clogged and overflow if no one strains out the dirt. Kurt’s story is all about sexual longing, told in the most honest way that a shy boy can tell it. As he pursues sex in all different locations, he also encounters old men looking for young men, which disgusts him greatly until he, too, finally has sex with the teenage Jonny when he is in his twenties.

Kurt’s story will resonate with gay men around the world. In some ways the novel reads like a fairy tale; nothing bad befalls Kurt during his travels, perhaps because he “sticks to the path.” Even the older men who have eyes for Kurt and Jonny are more interested in long term connections than short term sex. No one put themselves at physical risk and no one abuses substances. Navigating emotions and sexual drive is challenging enough for mindful young adults, and a major part of the educational experience of youth. Karlsen made sure that Kurt passed all of his exams, and for this reason, Stormwater Drains in Canberra may serve as a study guide for a new generation of young gay men.

Nikel, D. (n.d.) What exactly is Janteloven? Life in Norway.

'Falling into Place: An Intimate Geography of Home' by Catherine Reid
'Like a Dog' by Tara Jepsen
‘The Art of Living: An Oral History of Performance Art’ by Dominic Johnson