Queer Readers and Kim Addonizio’s ‘Bukowski in a Sundress’

Queer Readers and Kim Addonizio’s ‘Bukowski in a Sundress’ 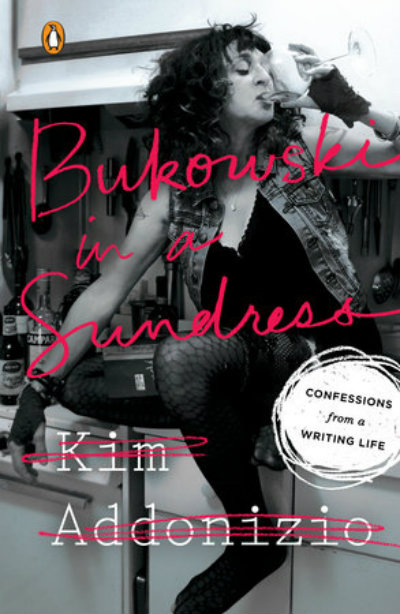 When I came out, I did so as both a poet and gay man. These were delicate, exciting experiences to have in tandem, and despite their challenges, two authors helped ease this process: Kim Addonizio and Ellen Bass. Both poets write about sex, love, loss, family, and creating a happy life that (sometimes) contradicts the mainstream. Bass’ authority as an out lesbian writer may be an obvious influence for a queer audience; I argue Addonizio’s work is equally important to many LGBTQ readers (though she identifies as straight) because her writing persona works as an amalgamation of identities queer readers understand: the outsider, the rebel, the provocateur, the lover, and the survivor. In her new memoir-in-essays, Bukowski in a Sundress (Penguin, 2016), Addonizio explores how these identities shape her personal and writing life. As an accomplished poet, novelist, and essayist, Addonizio’s sensitivity and melodic ear help create a humorous, thoughtful book about the complexities of contemporary life.

Bukowski in a Sundress benefits from a gorgeous cover, featuring the poet on a kitchen counter, dressed like early 80s Madonna and chugging from a wine glass. Addonizio has long played the rebel in her work, and this book toys with the reader’s perceptions of her reputation. Essays like “Plan D,” “Necrophilia,” “Penis by Penis,” and “How to Stop Drinking So Much” cast a self-deprecating lens on the mind–altering mix of booze, lust, and love. They discuss the physical and emotional complexities of an active sex and social life—complexities that sometimes seem worth the trouble, and sometimes seem a high cost for minimal reward.

The collection also navigates familial relationships. For example, “Flu Shot” describes the physical and emotional turmoil she experiences taking her mother to a pharmacy for a vaccination. Once a champion tennis player, the poet’s mother has been crippled by age and disease. Her mortality and her daughter’s love in the face of despair create a harrowing but endearing portrait of motherhood. Mother/daughter relationships form the backbone for the collection and Adddonizio does not shy away from her thorny past with her parents (among other family members).

She even faces anxieties about possible failings with her own daughter, actress Aya Cash. She worries about Aya finding her sex tapes and the effect of her romantic life on their relationship, which is discussed with skill in “All Manners of Obscene Things.” While Addonizio can be critical, she’s not afraid of self-criticism. She knows that we often share flaws with our family and lovers.

“Simple Christian Clarity” is the most complex examination of familial flaws in the collection. Investigating Addonizio’s relationship with a physically abusive, mentally ill brother, the essay discusses the challenges of leaving behind a destructive family member. Perhaps here more than anywhere else, the book directly speaks to the queer experience. As many LGBTQIA people suffer hurt at the hands of loved ones, they know it is sometimes crucial to cut toxic family and friends loose. “Simple Christian Clarity” doesn’t shy from the inherent obstacles in abandoning abusive people, and so she provides catharsis for readers facing this hardship—a catharsis that many queer people (like myself) will find comforting.

The book also uses a balance of humor, heart, keen observation, and self-reflection to explore what it is like to live as a contemporary writer—an experience analogous to being gay. Most of the essays, like the good-humored title essay, the witty “How to Succeed in Po Biz,” and the melancholy “Children of the Corn,” explore the disappointments of being a writer. No one gets out unscathed, but there are moments of levity too. Take “DOA,” a piece about having a novel rejected by her publisher and her inability to rework the book. It’s crushing to read, but the essay turns; botched writing leads to better writing. She finds a new project and it sells; failures are tempered by surprise successes. In essence, it gets better.

Readers who enjoy Bukowski in a Sundress should also check out Addonizio’s new poetry collection, Mortal Trash (Norton, 2016), which was released a week after the essays. The two books overlap in theme and it’s enjoyable reading a piece like “What Writers Do All Day”—an essay about procrastination—and then reading the poems in Mortal Trash that had their (sometimes) difficult births between the emails and vodka shots described in the essay. Bukowski and Mortal are sister books about creativity, mortality, and love. Reading them side-by-side fortifies both.

Late in Bukowski, Addonizio delivers an essay called “I [Heart] New York” in which she talks about saving a mouse from a glue trap she finds in her apartment. After much self-doubt, she faces her challenge and liberates the rodent. She writes, “It was clear to me now that New York was going to test me, and not just this once.” As a New Yorker, I identify with this sentiment. As a gay man, I recognize how this applies to queer experience too. Addonizio shows how our culture and surroundings will test us again and again. It’s facing those challenges that matters.

'A Visit to Priapus and Other Stories' by Glenway Wescott
The Fruits of Winter: Ryka Aoki's 'Seasonal Velocities'
'Noctilucent' by Melissa Buckheit

Isaiah Vianese's poems have appeared in Assaracus, Ballard Street Poetry Journal, Blue Collar Review, The Fourth River, and Moon City Review. He lives in New York, where he teaches writing, and blogs about poetry and music at ivianesefromyes.blogspot.com.