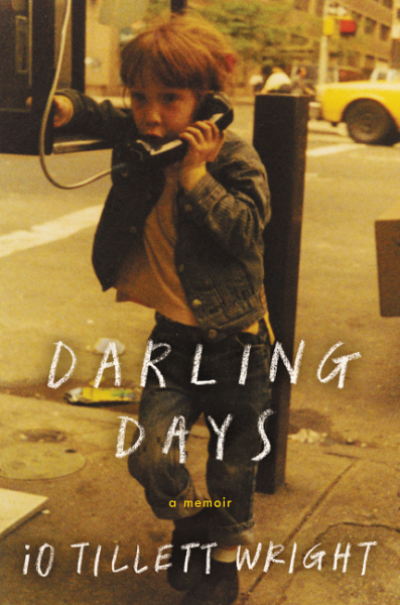 I took another swing at her shoulder out of embarrassment, but she pushed my hand away and kept laughing. These are the sweet moments. The times when I recognize what I see in other kids with their parents when they’re buying chocolate lollipops or driving past us after school. These are the darling days when everything is all good, the beast is calm.

iO Tillett Wright’s Darling Days is a decadent coming-of-age memoir that details the bumps, bruises, and bliss of the photographer’s first 22 years. These moments of triumph and failure are often tethered to iO’s tumultuous relationship his mother, Rhonna. A widow, dancer, and one-time Vidal Sassoon model, she is tremendous; within his first few sentences, iO refers to her as both a gladiator and a priestess.

A wise, unnamed person once said, “If mama’s not happy, nobody’s happy.” Page after page, Rhonna aggressively reclaims those words as her own. Darling Days spans from iO being placed in his mother’s arms to him leaving her––and her physical, emotional, and substance abuse–for the promising embraces of a new lover and a different NYC borough. Along the way, he navigates metropolitan poverty; first, second, and third loves; the child actor scene; and a fickle little thing called gender.

Those who fondly remember iO from a lauded 2012 Ted Talk will be pleased to find that he writes with the same precision with which he speaks––his rolling and sustained poetic, one part tender and one part straight-to-the-point, drips from the page. To have a memoir of his life, rather than the thumbnail sketch afforded by his lecture, is a real treat. Even at 400 pages, Darling Days remains highly readable. Each of the memoir’s 51 chapters is a sturdy vignette that can stand on its own without context.

Preceded by a heartfelt letter to his mother, the first few chapters of Darling Days are pure speculation. iO, using the mortar of his imagination, performs brick masonry on the family history that predates him, conjuring up his mother’s former lover’s murder and the circumstances of his own birth. After that, he comes at his own narrative in a fluid voice that always seems to match iO’s age on the page. His first-person, present-tense retelling is impervious to the current moment’s reflections, regret, and self-correction. Darling Days errs in the opposite direction, offering delicate moments of youthful meditation that evoke the idiom from the mouths of babes: “[….] Something happens when you cut people loose––they want to be near you.”

Youth comes with such a unique perspective, one that’s largely motivated by curiosity about the surrounding world. Because of this need for exploration and movement, the eyes often interpret their surroundings as a blur. In Darling Days, iO is certainly a youth in perpetual motion. He runs down city streets, leaping over used syringes in a single bound. He skateboards uptown and downtown and uptown again, stealthily delivering cannabis for a dealer. He flies from New York to Germany to boarding school in the United Kingdom. He soars across the Williamsburg Bridge in a secondhand Mercedes-Benz. In coming-of-age tales, only the people and things that catch the youthful eye––and manage to hold it–are worth space on the page.

Given that much of Darling Days takes place in New York City in the late 1980s and 90s, it’s easy to presuppose that the memoir will be laden with the gut-punch and gristle of a long-gone city–readers craving these stories will find themselves more satiated by Eileen Myles’ Chelsea Girls or Patti Smith’s Just Kids. Darling Days treats New York casually, like an old friend that one calls sporadically, but always comfortably; there is no overwhelming personification of or nostalgia for the place. Nor is there much mainstream historical or political context. Despite Darling Days spanning the years from Ed Koch’s mayoralty to Michael Bloomberg’s, there are no mentions of the AIDS epidemic, the spectacle of the 2000 World Series, or the events of September 11, 2001.

Rather than being a disservice to readers, these omissions strengthen the memoir–iO is no CNN news ticker, and he gracefully subverts the landmark moments we’ve been instructed to associate with New York. In between tales of an inaugural gender-affirming haircut and his mother’s humorous attempt at discreetly replacing a dead finch with a Petland-purchased doppelgänger, iO is generous with tabloid anecdotes, including the delightfully grisly ones:

One day before I was born, a blond Texan kid with a long beard tried to talk his way into our apartment for the night with some Christian gibberish but my dad told him no way. Later he killed a German ballerina and fed her to the homeless in Tompkins Square park, stewed with onions. Front page of the New York Post.

Renee James: On Writing a Trans Crime Novel
'The Absolutist’ by John Boyne
'The Argonauts' by Maggie Nelson