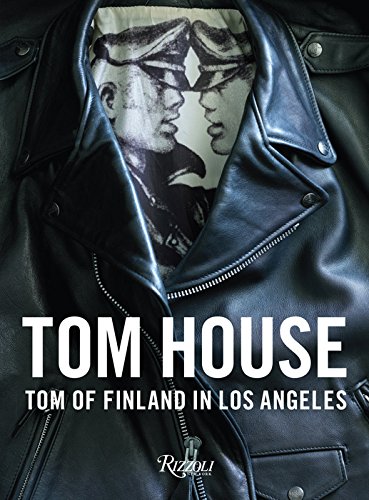 A man has a look on his face that screams trouble. He wants something from you. He wants you to take your clothes off. He wants you naked. His clothes barely fit. They’re skin-tight and his thickly drawn muscles burst out of every opening. Even the shading is sexy. The man wears leather and, with hands much larger than his face, reaches over to touch you. It’s not like he wants to buy you a drink, he wants to be the drink. Outside the window, more men. Further away, more still. The streets are brimming with them, and beyond are rainbow-colored bars, and shops spilling out with dildos, cock rings, vibrators, and lubricants of all kinds. The testosterone is potent. You’re in a city not unlike all the others, except if you choose to look, it will look back at you.

Finnish artist Touko Valio Laaksonen (aka Tom of Finland) has fueled his practice with the very stuff of observations; to him, the city acts a playground of ever-hotter imagery. Eaten up by unrealized sexual fantasies for most of his early life, Tom of Finland put his imagination to the page, drawing pictures of a libidinal, homoerotic imaginary. Growing up, Tom lived in a heavily industrialized countryside. While his eyes poured over the muscular, sweating, laboring men of the land, his drawings revealed a perception of the male body highly inflected with the flavors of “hyper-masculinity—always a ‘superman.’” But it wasn’t until Stalin’s invasion of Finland that Tom was able to realize his projected fantasies with men whose bodies fit snuggly within the outlines of his heavily-shaded illustrations. They were burly. They were hairy. They were buff. They were manly as hell. They were everything he wanted.

From this desire, Tom of Finland developed a meticulous practice. He set out to create illustrations of men that would turn on, provoke, and lure his viewers. Men found a primal attraction and fascination for the kitschy, sexy, paradisiacal men Tom of Finland overtly depicted. His work suddenly made leather daddies and BDSM accessible. He took the artistic license to represent a world of explicit homoerotic desire, which, at the time, was taboo (and is still in some parts of the world). The men in the work are not typical. They’re not the men you’ll walk down the street and lock eyes with, or that you’ll spot at a bar casually. They’re a fantasy.

His success grew out of this edginess and, in the early 80s, after many successful gallery shows, Tom and his protégé Dirk Dehner moved to Los Angeles. There, they founded the Tom of Finland Foundation. A sanctuary for men who wanted to live out their fantasies freely, the “Tom House,” as it’s called, serves as a site for the exhibition, archiving and preservation of erotic art. The 1984 foundation is the subject of Wallpaper Magazine editor Michael Reynolds’ new book from Rizzoli. With an introduction by Mayer Rus, editor at Architectural Digest, this title captures the alluring and fantastic essence of the Tom House.

“Tucked behind a monumental Eugenia hedge on a street of modest bungalows and apartment houses,” Rus writes, [the Tom House] is one of the gay world’s most idiosyncratic and authentic historical sites.” The house’s setting unfolds into a vivid and tangible atmosphere, as Rus sets the scene: “Meanwhile, two guys engaged in light codpiece-on-codpiece frottage unexpectedly break out laughing… Across the way, a shirtless beefcake wearing a leather apron and a tattoo that reads ‘Tom of Finland’ across his well-muscled back is shaving the head of a fetching lad in a rickety barber chair.” Paging through the book, one discovers the various elements that make up Tom House: objects of fascination and kitsch, ever-present imagery of cocks-and-balls, leather, metal chains. It’s not just a place for the casual passerby, but rather, a welcoming one for the curious and the initiated, the local and the traveler, and for those who have made the pilgrimage to live and work in Tom’s legacy. In fact, to this day, it is a home to emerging artists and men from the community—a living history museum.

Foundations like this one, which are physical sites for preserving a living history, have been crucial centers for many artists whose practice falls outside of the mainstream. And current events have made spaces of safety necessary and crucial; spaces where our fetishes and libidinal cravings are welcomed with open arms, not attacked, and not killed. With this new presentation of Tom of Finland’s practice, Reynolds has truly brought to the surface the intimate nature of this community, and it’s remarkable.

A Poem by Andrew McMillan
'The God of Longing' by Brent Calderwood
'Fat Angie: Rebel Girl Revolution' by e.E. Charlton-Trujillo