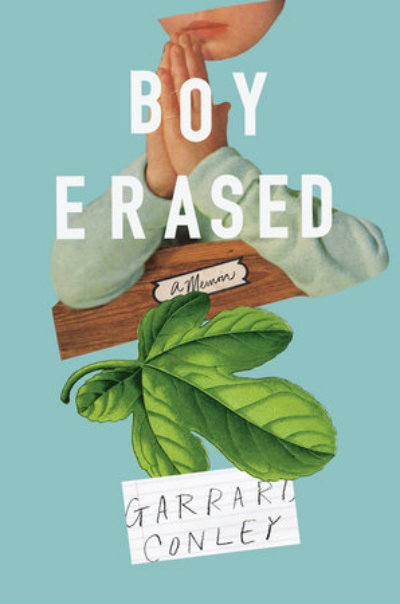 It was difficult to not become angry when reading Boy Erased, Garrard Conley’s memoir of growing up in a devout Southern Baptist household in a small Arkansas town and his brief-but-damaging contact with Love in Action, at the time, the largest ex-gay therapy organization in the world. It’s difficult because this book isn’t vindictive, and, oh, how I wanted it to be. No one gets what’s coming to them. There’s no palpable anger. There’s no penance or resolution. There’s just the uneasy co-existence between a cultural geography Conley has been conditioned to accept that doesn’t—and won’t—accept him back.

But that non-resolution, I’ve realized in the weeks since I read the book, perhaps that’s the point. Boy Erased has been depicted as Conley’s story of surviving Love in Action, but, in truth, Conley’s time in Love in Action is a metaphor for a much larger, more dangerous conflict, a cultural conflict that poised a very real risk to Conley, and to anyone growing up and growing into someone who identifies as LGBT. There are some people and some institutions who simply don’t think that we should exist.

Understanding that a shaky coexistence—if not a clear threat—still lingers in this country is one of Boy Erased’s most important missions and its greatest success. Conley’s story is a reminder that challenges to the everyday lives of LGBT people continue, if not always in public, then sometimes behind closed doors, sometimes in the shadows, and sometimes from the pulpit. Despite numbers that show people’s association with organized religion is waning, visit a small town in Arkansas like where Garrard grew up and a strong influence is still evident.

Or visit the small Arkansas town where I grew up.

I can’t separate myself from this book, and it would be a mistake to try. Growing up in a small town in the south, religion was woven into the fabric of every aspect of my life. I can’t separate my own experiences, my own time playing in the Arkansas dirt, my own baptism before I knew what that word meant, my own self-doubt, or my own self-hated, from the experiences Conley writes of in Boy Erased. The truth is, I know the people he writes about. I’ve lived in those towns. I’ve been to those churches. I’ve run along the same back-roads—running away from myself and from a future I didn’t think I deserved.

I grew up in the 90s. Conley came of age in the early 2000s. Just a few weeks ago, in 2016, one of the two major political parties in the United States unveiled a platform that still supports conversion therapy for minors. This fight isn’t over, and it’s not confined to the south. As I travel around this country promoting Sibling Rivalry Press, the LGBT-focused press I run with my husband from Little Rock, it never fails that I meet someone still suffering from church-imposed dissonance between love of God and family and being true to oneself. As if they have to choose. I’ve seen it in Arkansas. I’ve seen it in Georgia. I’ve seen it in New York, and that’s exactly why Boy Erased is both effective and important.

The narrative of Boy Erased flashes back and forth between Conley’s time in conversion therapy, moments in his youth (where his father, on track to be a pastor, scans the news daily for signs of the coming rapture), and scenes from Conley’s college experience. It’s at college, where Conley, free to stray from his rigid background, meets other people who demonstrate various degrees of acceptance of their own sexuality. Sometimes these encounters are harmless though bewildering, but sometimes they have repercussions that are far reaching, one of which is the catalyst that outs Conley to his parents and lands him in Love in Action.

Conley has said he hopes to reach conservative audiences with Boy Erased, and that’s important. As much as I wanted him to throw fire, and as much as I still want him to throw fire sometimes, he understands that in building bridges, he might prevent someone else from the torture of conversion therapy. Me? I’m already a believer in the church of ourselves, and I have no patience for someone who considers sending their child to conversion therapy; this is the root of my anger. I can’t shake it. But when this book lands into the hands of someone on the fence, someone whose child might be gay, someone who is from a small town and goes to a less-than-progressive church, Conley’s tone is a tentative handshake rather than a fist to the face. Believe me. There are people who need this book. Believe me. This book will save lives.

The most powerful moments in Boy Erased surround Conley and his mother. How she wants to do the right thing for him. How she truly believes she and his father are doing the right thing for him. How that righteousness slowly turns into questioning. Had this book landed in Conley’s mother’s hands when she was searching for answers—and she was searching for answers—things might have been different for Conley.

I heard Conley read from Boy Erased when he visited Little Rock on his book tour. His mother sat in the audience, surrounded by friends from the same hometown Conley has escaped. Two things were clear. Conley absolutely loves his mother, and she absolutely loves him. But there’s still a struggle. When someone in the audience asked her about her own journey of acceptance, she admitted that she’s not there yet, not all the way. In her next breath she said she’s happy her son is gay, and he’s the best son she could have asked for. It became clear she meant that her struggle isn’t with her son, but with her community and what’s she’s known her whole life, up until this point, to be true. Conley’s mother, I’m sure, has to justify the love she has for her son when she returns to that small town and steps into her church.

Conley never names his hometown in Boy Erased. That’s strategic. It could be any town.

'Emma Goldman: Revolution as a Way of Life' by Vivian Gornick
“We inhabit the brutal. We are shattered every day./ We look askew”: A Review of Dawn Lundy Martin’s...
Romance Writers Engaged!