‘Trouble the Water’ by Derrick Austin

‘Trouble the Water’ by Derrick Austin 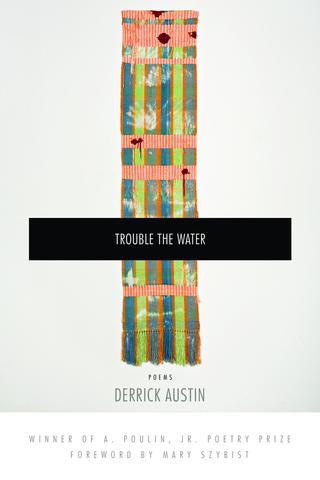 — from ‘Wade in the Water,’ a Negro spiritual

Derrick Austin, in his rich and layered debut collection, wades the reader into the shallows and depths of art and longing, of race and religion. The book is infused with sensuality; history and myth; and a clear passion for and knowledge of art. From an early age, Austin was obsessed with history, and connected to ancient cultures through art and religion.[i] This background seems to lend the poems an ease with these “lofty” subjects so, in Trouble the Water, art and history are never heavy-handed; the allusions are neither intrusive or burdensome (nor an end in themselves). Instead, they enable Austin to strike a skillful balance among head and heart—and groin.

Form drives this collection of carefully wrought—never over-wrought—poems. In an interview with BOA Editions, Austin says a poem isn’t done (for him) “until it has a solid form,” without which he thinks his poems would feel “flabby and prosy.”1 The received forms in this collection (quite a few sonnets; a villanelle; two sestinas) and invented structures make the poems vibrant and taut, intensifying the subject matter and creating a more pleasurable experience for the reader. More pleasurable than, for instance, two books I read recently (and tried to review)—by much more established writers—whose apparent attempts to loosen or let go of form entirely made for flaccid, self-absorbed, nearly unreadable poems.

Many of the poems in Trouble the Water are free verse and certainly “personal.” But, as Austin reveals in discussing his poem “Blaxploitation,” “the constrictions of form . . . gave me the freedom to use multiple tones and ranges of reference . . . . [Form] releases a dynamism and verve that my free verse poems can lack.”[ii] But even his free verse poems lack for nothing: all of the poems in this collection seem propelled by attention to meter and sound.

Austin credits Florida as having a profound influence on his writing. “The muchness of the sea, the flora and fauna, the atmosphere—always getting into your home, your skin.”[iii] The poems in this collection get in, as well. They are humid: “the airless damp, rich with salt”; “we and dozens of musty tourists”; “the heat sticks to us like flies. / Even the plaster walls of our rented room sweat.”

These and all the images in Trouble the Water are vivid and evocative, whether referencing Greek myth, “Lifted up like Antaeus,/I’m powerless before you./Another night suspended between heaven and earth.” (“Antaeus”)

Or a pot of greens: “The water was burning // when we went to the coast, green and churning / like collards in the kitchen[…]” (“Summertime”)

The book’s sections are organized around place. The first two take us from Austin’s very real and sultry coastal Florida to opulent cathedrals and museums in a sequence of poems “loosely inspired” by an imagined Venice. Section three brings the reader back to the Gulf, but here the speakers are more somber: an “Apology”; several elegies. The fourth section is less located; though places are still important—graves, an empty bed, a location-specific artwork—in this final section, ancestry (racial and literary) seems to take precedence over geography.

As the settings vary, so does the music; Austin is a master at tonal shift, artfully veering from “high” to “low” diction. One sequence exhibits these juxtapositions most dramatically: “Sans Souci,” six poems in the book’s second section that at first alternate cleanly between ekphrastic poems (featuring paintings by Caravaggio and van Dyck and an imagined etching) and the speaker’s domestic (and sexual) situation outside the museum. From the last lines of the first poem of the sequence:

Cruel body which gathers and leaves
________such sweetness.
Only darkness in the painting,

—followed immediately, in first line of the next poem, by “I believe in art more often than your cock.” And in the move from the end of No. 5 (lines of dialogue discussing the “clasped bodies” in an imagined etching) to the first line of the final poem of the sequence:

Slowly eat out my asshole, slowly while bees
lave daffodils on our balcony and remember
each bloom with dance. . . .

As the poem continues, the sequence’s prior distinction between museum and bedchamber blurs. The bed is referred to as a canvas; a painted halo is compared to a real cock ring; the final line’s double entendres complete the merger. The bedroom—with its own kind of studied gaze—has become the gallery; Poem 2’s “I turn to minutiae and away from you” becomes the final poem’s “You teach me what the Old Masters can’t . . . yours are the hands / that master and finish me with a final stroke.”

Austin shared in that BOA interview that “[t]he language, the metaphors, the poetics of the Bible made sense to me as a young poet. It was a language of strife and longing that sounded natural to me being gay and black.”i Austin treats race and the church (sometimes interwoven) in various ways in the collection, and his poems with explicit racial content can pack a wallop: “Blaxploitation,” a sestina in which thirty-eight of its thirty-nine lines end in “black”; “O-P-U-L-E-N-C-E,” in the voice of a globe- and history-hopping drag ball diva; “Magnolia,” in which the iconic Southern flower leads the speaker to reflect on trees “shaggy” with hanged Black bodies. This poem compares those “silent heads nodding” to church-goers’ heads: “under magnolia-shaped windows. I can’t stand to/look ahead/at another dead black boy.”

Confronting mortality (in an earlier poem), a speaker considers his own (small) place on the shoreline:

The speaker can’t control the waves, but the writer certainly does. In Trouble the Water, Derrick Austin is revealed as a masterful new voice.

'Now and Yesterday' by Stephen Greco
'The Clothesline Swing' by Ahmad Danny Ramadan
'Is This The Real Life? The Untold Story of Queen' by Mark Blake