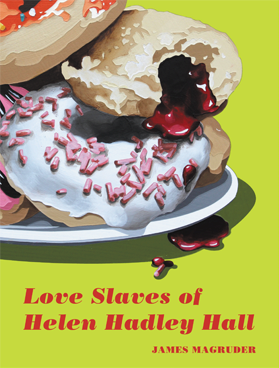 I could take the easy way out and review James Magruder’s Love Slaves of Helen Hadley Hall (Queen’s Ferry Press) by simply quoting at length from the novel. The writing, which brings to mind the linguistic precision of Ronald Firbank, speaks for itself. How could you not want to start this book if I tell you that Magruder describes its early 1980s backdrop as a time when “a coffee didn’t trail Italian suffixes like a servant role in a comic opera–it came in caf or decaf, small, medium, or large”? Or that one character is pleased “to think she could like some gay guys and not others, just like she did with normal people”? (Of this same character Magruder tells us “mood swings made her feel young.”) Or that within pages of the novel, its narrator promises the reader “carnal congress, a near-homicide, and a wedding finale”?

And who is this narrator of Love Slaves of Helen Hadley Hall? It just happens to be the spirit of Helen Hadley (or what the cover notes call an “ectoplasmic emanation” of the woman for whom the hall is named), still residing in the Yale residence hall. It is this voice (which does take some getting used to) that relates the “communal tale of love surprised, love suppressed, love confessed, betrayed, renounced, repelled, of suspected leanings and trembling declarations, of hymens under siege and innumerable searching looks in the mirror.”

At the center of the story are the denizens of Helen Hadley Hall: Silas Huth (“an underdog by any American standard”), Nixie Bolger (“a charmingly pre-Freudian throwback of a woman”), Becky Engelking (“a trained soprano and former pitch pipe for the Iowa State Swingletuners”), Randall Finn (“prodigy of art and faith” whom bossy older women find irresistible), and Carolann Chudeck, mother of two teenaged boys who “never discussed male urogenitary matters outside the home.”

The plot–or I should say plots–finds these characters in a string of trysts and romances. Silas, smitten by Scott Jenks (“the blue-eyed Princeton paragon” of the French department), loses an opportunity to date him by one day to Peter Facciafinta (“a lithe charmer who supervised the dorm desk staff”). Nixie pursues Walt Stehlik (“six-feet-four of sleepy maleness with richly knotted calves”). Carolann is enamored with Professor Nathaniel Gates (one of those “rector-ish New Englanders, whose weedy builds, sloping slightly at the shoulders, are kept trim by morning Grape-Nuts and squash twice a week”). And on and on…

If all of this sounds a bit confusing, it can be, at least for this reader. The addition of the many secondary people can make the novel at times feel a little overpopulated and a little under characterized. But Magruder knows what he’s doing, and the prose and wit carry the narrative even when things get a little fuzzy. Whatever its flaws, Love Slaves of Helen Hadley Hall is never less than entertaining, bringing to mind some of the early films of Whit Stillman. (Think Metropolitan or The Last Days of Disco.)

Like Stillman, Magruder is not afraid to face the specter of change hovering over a specific time and place. The shadow of AIDS in Helen Hadley Hall reminds us how far we’ve come in both treatment and understanding of the disease since the early 1980s. (“You get it, you die,” says one character. “You get it if you do poppers,” says another.) It also reminds us of the particular horror of those early years as the novel leaps forward in the final chapter to pay a sort of homage to characters fallen to AIDS.

It should come as no surprise that Magruder has his doctorate in dramaturgy and dramatic criticism from Yale School of Drama and has extensive experience in translation for the stage, especially Molière. In the end, this sparkling novel owes much of its success to Magruder’s remarkable ability to manipulate words to get to the heart of all matters, especially matters of the heart.