‘Are You Here For What I’m Here For?’ by Brian Booker

‘Are You Here For What I’m Here For?’ by Brian Booker 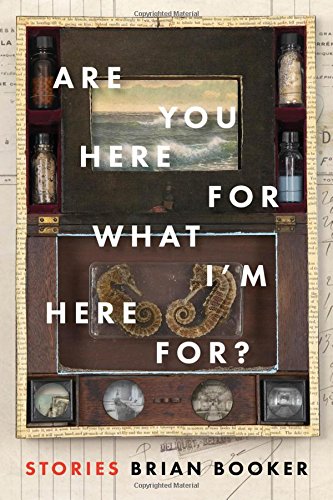 Brian Booker’s excellent collection of stories presents an ambiguous modern world where characters live shadow-lives of alienation. These stories are haunted by the likes of Kafka and W. G. Sebald, whose tales presented the underpinnings of a reality strange and suspect, muted and disorienting, and resistive to closure–stories that make gestures toward plot lines, which are as elusive as they are dissonant. As has been said in the publisher’s description Booker’s stories of suspense and menace “remain grounded in the emotional lives of people teetering atop widening chasms of confusion and doubt.”

Booker’s narratives trace contemporary American life with a close eye and a good ear. Booker has a way of catching the nuances of the American psyche. The writing is crisp; the characters are believable, yet the stories dissemble around momentous emotional and moral occasions.

A woman who goes to a resort ostensibly to recover from an illness she may or may not have; a man on an interminable train trip where he may or may not be held as captive; a boy who talks to a sea creature in a bottle who may or may not be a mermaid reeking evil on a community; the instability of these narratives leaves the reader aware of the rifts in our American consciousness and day-to-day lives. One older character may be a killer of young boys. An older woman may be attracted to a young man who is a gigolo or perhaps a fellow survivor of illness pursuing a cure. Perhaps the most telling scene in the book concerns a man who claims to be a hypnotist. To a skeptical audience he seemingly hypnotizes a group of participants picked from the crowd. The men are suggested to believe they are women contestants in a beauty pageant, the women to feel “ten times more sexy than they’d ever felt with their husbands.” The story both refutes and confirms the actions of the participants, who may or may not be in cahoots with the hypnotist.

This same situation applies to the reader. Booker may be hypnotizing with feelings of uncertainty in an illusory world, or he may be giving us the truth. In a related story, an apothecary may or may not be able to cure common ailments and neuroses or he may be a quack and a charlatan. We can never quite be certain about these identities, which are both fluid and deceiving.

The landscapes of Booker’s narratives are familiar to American life: a New Age cultish camp where wayward teenagers are made over into conformists; a Club Med style resort where middle class Americans can escape the realities of mainland life; a town where citizens take a hysterical stance toward a young student who has been forced into quarantine for a strange plague-type illness–he may or may not have; the forced entry and search of a man’s home where he is suspected of harboring a fugitive; a wealthy suburban residence where a negligent single-mother has underage daughters who have sex and indulge in drugs in a nihilistic fashion.

“Postmodern” is the much-maligned word I’d have to use to describe these seven short stories. “Magic Realism” is another term that comes to mind, although Booker places more emphasis on realistic narrative and naturalistic technique than surreal aspects of dream and fantasy. In this sense of askew perspective, Booker presents the modern day queer aesthetic. This aesthetic has been defined by Gordon Hall as:

an unstable subject position aimed at dismantling all naturalized conceptions of being in the world. Because this is essentially a sensibility . . . any formal connections are deeply historical. The critical work of ‘queer aesthetics’ is not predicated on the sexual identity of the artist with any sort of essentialism, but rather refers to engaging with our (already) politicized ways of being.

Further, it has been stated by Cassie Peterson in “But, What is Queer Art: A Paradoxical Manifesto” that:

Queer both blurs and challenges normative assumptions about the world and our place(s) in it. When linguistically re-appropriated and politically reclaimed, the word queer exists as an elusive and indefinable paradox because its task is to actually deconstruct static definitions and binary identifications.

In a sense, Brian Booker’s work joins a new canon of queer literature.

As has been said by Charles Baxter in his blurb on the book cover: “I don’t know of any writing quite like [Booker’s].” I would heartily agree.

'Tango: My Childhood Backwards and in High Heels' by Justin Vivian Bond
'The Prince and the Dressmaker' by Jen Wang
'The Intimates' by Ralph Sassone