‘You Know Me Well’ by Nina LaCour and David Levithan

‘You Know Me Well’ by Nina LaCour and David Levithan 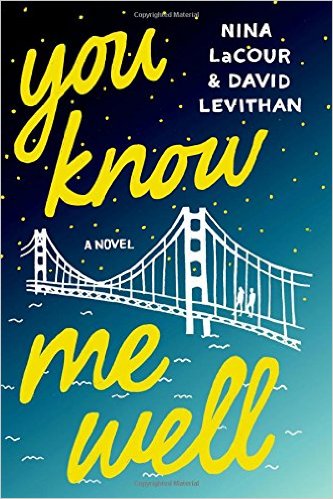 You Know Me Well is about a rainbow alliance, and Kate and Mark are at its center. Both gay high school seniors, Kate and Mark are hardly acquainted—though they sit near each other in calculus, they have never spoken. Which makes it all the more awkward when, on the first night of San Francisco Pride, Kate sees Mark competing in an underwear dance competition (long story).

Kate is an artist who is anxious about going to college; Mark is a baseball player who is in love with Ryan, his best-friend-whom-he-sometimes-has-sex-with-but-who-is-not-actually-his-boyfriend. Both of them have big plans for the first night of Pride: Kate is about to meet Violet, a girl who has lived in Europe for the past twenty months and who Kate’s best friend has decided to set up with Kate. Through their mutual friend, Kate and Violet have slowly fallen for each other. Meanwhile, Mark wants this to be the night that he and Ryan finally confess their love—he is itching for Ryan to see him as more than just a friend he sometimes experiments with. But both Kate and Mark end up disastrously disappointed. Right before meeting Violet, Kate panics and leaves; Mark, instead of spending the night with Ryan, is forced to watch as his best friend dances with a tattooed college boy.

To escape their own problems, Kate and Mark turn to each other. Their night takes them to a party with Kate’s drunk friends, to a sea lion viewing at Pier 39, to a mansion with a famous photographer who makes them Instagram famous. In the process, they share their fears: Kate worries she has ruined her chance with Violet, while Mark hopes Ryan won’t find a real boyfriend.

Thus begins Kate’s and Mark’s very queer friendship (“our own rainbow alliance,” as Mark so aptly puts it). Over the next week, they navigate relationships, arguments with friends, Internet celebrity, anxieties about college, LGBTQ+ poetry slams, and an art studio that blasts EDM and features inappropriate c-words spelled out in LED lights.

Their dynamic will likely be familiar to many readers. Ask queer high school students what has influenced them the most, and you’ll be surprised by how many answer “community.” Whether they are found in person in GSAs or online on Twitter and Tumblr, friendships of this kind have had a profound impact on many LGBTQ+ teens. Often, community is how we express ourselves, how we explore who we are and who we want to become.

This is what is revolutionary about You Know Me Well, a novel fittingly co-written by two giants in the realm of queer YA—Nina LaCour (Hold Still, Everything Leads to You) and David Levithan (Every Day, Boy Meets Boy). You Know Me Well is one of only a few YA novels where queer teens are friends with other queer teens, where our culture and our insecurities and our very bad jokes (shouldn’t the opposite of “straight” be something cool, like “scenic”?) are on full display. This celebration of community transcends Kate and Mark—nearly every named character is queer, and unapologetically so. Their relationships, of course, are imperfect: they fight, and they cry, and sometimes they hate each other. But they are us. Our world. Our parade.

At times, the fast pace of You Know Me Well comes at the expense of authenticity: characters fall in and out of romances and friendships without warning. (Mark and Kate, for instance, develop an intimate connection the second they meet.) Many of the relationships could have been better fleshed out. But this, ultimately, does not detract from the magic of the novel: to read a book that is so proudly a love letter to the queer community is sure to make countless readers feel more confident about who they are.

Throughout the novel, only Ryan ever appears insecure about his sexuality. To the rest of the characters, being queer is ordinary—only on occasion do they worry about being different from the rest of society. Yet when Kate and Violet kiss for the first time on a public sidewalk, they are met with applause. “Happy Pride!” someone shouts. It is jarring to read: after so many pages in which same-gender attraction is unremarkable, here is a group of people treating it as a rare occurrence. But the scene is a reminder that being queer in public spaces remains a social statement—one that is increasingly well-received, yes, but a social statement nonetheless. Though Mark and Kate see their sexualities as unremarkable, to the rest of the world it is something to stop and stare at. This contrast parallels the novel itself: for what is likely to be a widely read YA novel to feature such a large cast of queer characters is a revolutionary act, but few readers will remember this as they turn each page. No special attention is drawn to the fact that nearly all of the characters are queer—their love, their friendships, their community are presented wholly without shame. It’s a wink at the reader—yeah, it says, we’re here to stay.

'Tangles: A Story about Alzheimer's, My Mother, and Me' by Sarah Leavitt
'Ask the Passengers' by A.S. King
'These Things Happen’ by Richard Kramer

Michael Waters is a YA writer and the creator of B&N's "YA Open Mic" series. He lives in Connecticut and tweets as @ABoredAuthor.