‘The Halo’ by C. Dale Young

‘The Halo’ by C. Dale Young 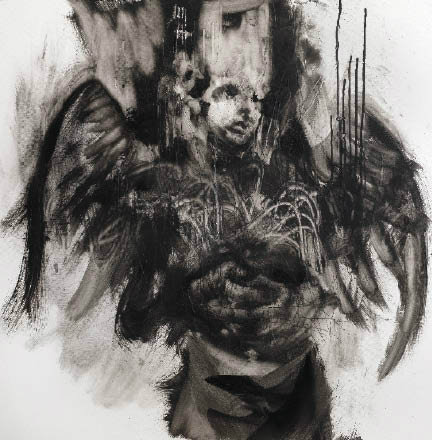 In a mythic landscape populated by Greek gods, wolfish men and flightless angels, C. Dale Young’s The Halo, the poet’s fourth and latest collection, explores intersecting mandalas of memory, legend and the quest for self-actualization. The familiar occurrences of a lifetime are approached through fantasized narrative (The Halo is billed as “quasi-biographical) and defiant reclamation.

Many poetry collections are just that, gatherings of disparate pieces united only by a writer’s voice, but The Halo features a loose story that holds together neatly without overburdening each poem’s capacity to chart its own course. A young man sprouts a set of hawk-like wings at 14 years old, a ghastly, painful occurrence that will consume him seemingly for decades. He wraps them in bandages far into adulthood or wears two shirts to cover their eruption, which occurs whenever he experiences a flush of excitement or fear. One poem, “An Ordinary Boy,” relates his attempts to pull the wings from his own flesh, one feather at a time.

“A fascicle of feathers in my hand, hand/frantic and shaking, my arm holding my hand/as far away from my body as possible – I am disgusted.”

The signs are clear, at least to an LGBT audience. This kid is gay, which pans out in later poems about go-go dancing or his passionate sexual and emotional yearnings for men. Thankfully, The Halo is much, much more than just another coming out and self-acceptance story. Young explores the subtler reaches of the gay experience–the effects of duplicity on a tender heart; our archetypal forebears whose voices have been all but silenced by straight-washing;  the delicate dance between vulnerability and aggression in man-on-man love.

In the midst of his angelic terror, the narrator also suffers on more obvious levels. A drunk driver runs a stoplight and careens into the teen boy’s car. He wakes up in the hospital, his head encased in a metal halo screwed into his skull because of the three cracks in the second cervical vertebra, called “the hangman’s fracture.” Young intertwines the boy’s memories with his own medical knowledge (the writer is also a doctor), which lends technical precision to his poetic insights, perhaps most strikingly in “The Hanged Man.”

Woven throughout the memories of the narrator are direct attacks on the gods, the forces that transform us (for better and often for worse) into the people we never wanted to be. Young references stories of Apollo most often, that radiant Greek god of poetry, medicine and prophecy, who is forever chasing mortal lovers. The narrator puts his own riff on the ancient tales and questions the obeisance paid to the divine in “Bloodline.”

“Ovid writes that Apollo loved the boy,/loved him more than any living thing/ on this earth. But we know better./The gods love only themselves.”

In recalling the myth of Daphne, who runs from the randy god and is transformed by her father into a laurel tree, Young writes, “…The gods have little use for us once/we have been changed. They take the laurel leaves,/scorn the wounded bird, erase their tell-tale footprints,/busy themselves with the generous work of gods.”

Throughout The Halo, the gods are not infallible, good-hearted or even desirable. They’re cruel and predatory; they leave us to our own devices except when we become the victims of their insatiable lust or envy. When placed in the context of the winged narrator searching for meaning in the midst of madness, these defiant attacks on heavenly forces are the familiar lament of anyone who’s marched through hell with a knife in their back.

That Young manages to weave such lofty and, at times, uncanny themes with a deft hand is a testament to his skill. After long lines, which soar with ideas and complex histories, he often grounds the entire fantasy with a brief quip or even a humorous phrase, interrupting a rhythm that, were it any longer, would become unwieldy. Economical sentences evoke profound images. Etymology serves as a gateway to illumination.

It’s not a flawless work. Sometimes, the fantastical teeters on the trite (the sexy, wrestling wolfman comes to mind), and occasionally the narrator’s laments veer perilously close to self-pity. There are many literal and unnecessary questions throughout, where, at other more artful moments, the reader asks their own questions because of a delicate shift of words. These moments are unfortunate interruptions because of the fine material surrounding it.

Luckily, the wobbles don’t cause any serious damage. Between the writing itself and the often elegiac voice, a hallucinatory dreamworld is created from the ashes of accidents and the capricious blessings of the gods. It’s a very easy world to inhabit and through The Halo’s revelations, we all learn that we’re angels –fallen or about to be.

H. Melt: On Cultivating a Community, Chicago Art, and the Future of Trans Poetry
'Daydreamers' by Jonathan Harper
A Poem by Chip Livingston