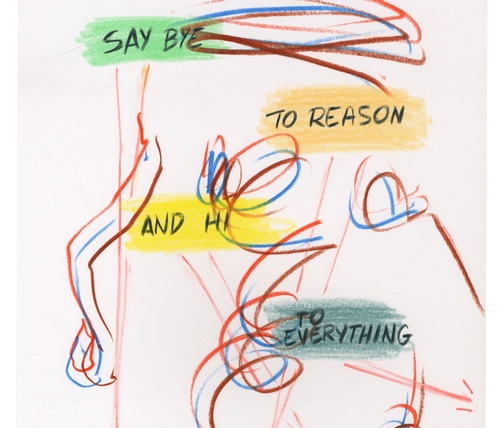 With Say Bye to Reason and Hi to Everything, Andrew Durbin collects five individual chapbooks spanning poetic and essayistic forms, by five writers, all women: Dodie Bellamy, Cecilia Corrigan, Amy De’Ath, Lynne Tillman, and Jackie Wang. The authors share an investment in tracing the possibilities of the “I,” the first person, the personal as political—as a socially constituted and gendered self—as well as the ways that writing, or perhaps art more broadly, shapes and can be shaped by that self.

Jackie Wang’s Tiny Spelunker of the Oneiro-Womb compiles the author’s recollected dreams, most of them presented in lists of short phrases derived from Wang’s Twitter. Many of the dream-poems begin with the phrase “In the dream,” or perhaps “In my dream,” demarcating them from waking life; yet the boundaries between dream and reality prove porous, as real figures and real concerns—desire, race, gender, the work of writing—emerge. A quest for self-knowledge through the subconscious, Tiny Spelunker asks how, and through what restraints, the self comes to be through writing.

The impressive poems in Amy De’Ath’s ON MY LOVE FOR Gender Abolition deploy the language of leftist politics while consistently undermining its presumed linearity and authority. In “Poem for Verity,” she writes, “There’s nothing I’m proud of but there are six things / We live among: irritation, agitation, death, dissociation, and / Two good abstractions only ‘the oppressed’ would know.” Moving between the personal and the structural, between image and abstraction, these poems are political—as the titular, beloved destruction of gender’s political significance makes clear—while maintaining an unease about how politics operate within a poem.

Cecilia Corrigan’s Cream constructs a compelling persona, also named Cecilia, a strange, social, high-femme narrator with an expertise in “cream and information.” Preoccupied with questions of beauty, anxiety, and all things traditionally written off as girly, Cream functions as part of Corrigan’s larger project, as a defense of the vapid, the superficial, and the feminine. Jocelyn Spaar’s illustrations—of cosmetic jars and tubes, abstract designs, and young women shopping and eating pizza—are dispersed throughout, further evoking an Alice in Wonderland-like girlishness. The chapbook’s final section lifts the veil—or perhaps removes the makeup—from the constructed persona Corrigan has established. Its tone is more straightforward and explanatory, dispensing with the femme-naïf voice that makes Cream so engaging in order to account for its relevance. This apologia feels unnecessary; its presence seems to reify a sense of self “without make-up,” without a consciously constructed persona, as being somehow more real, or at least more believable. Though perhaps Corrigan’s point is that this self—“the run-on sentence honest female girl”—is a persona or archetype too.

A concern with the performance or enactment of femininity, but also with how that performance is received, runs through the collected chapbooks. Dodie Bellamy’s More Important than the Object opens with a short essay on Chantal Akerman’s Jeanne Dielman, 23 Quai du Commerce, 1080 Bruxelles; she shares with Corrigan an interest in how cinema represents gender. And in “The Good, the Bad, and the Pretty,” a short text on the painter Jay DeFeo, Bellamy meditates on prettiness and what she calls “female excess”: “Pretty is helpless and feminine… Pretty is beauty’s goofy little sister. Pretty is degenerated, there’s nothing lofty about it.” She defends DeFeo’s “pretty” painting, The Veronica, writing that its “fluttery buttercream” surface, its range of associations, are precisely what give the work its subversive power: “Femininity flails its pretty neck and grows monstrous, out of control.”

Both Bellamy and Lynne Tillman write about art in their contributions, though always through the lens of the personal and with an attention to art’s social contexts. Tillman’s collected columns for Frieze move seamlessly through topics and cultural referents that range from Oscar Wilde to Joseph Goebbels, New Years resolutions to reality TV and NSA surveillance, as in the short piece “O.T.T.” The columns are comprised of smart reflections on these subjects and the associations she draws between them, refusing platitudes in favor of ambivalence and contradiction. They don’t often touch on works of art in specifics; instead, Tillman understands art broadly, in a way that feels at once refreshing and somewhat un-contemporary. Art here is a project, a way of shaping one’s life, and a series of desires and demands. Bellamy similarly sees art as a way of living, inseparable from the artists and writers that generate it. In “Re:Mission,” she laments the decline of San Francisco’s Mission district art scene through both gentrification and museum collecting practices, evincing nostalgia for a moment before subcultural art practices were so rapidly absorbed into the market and the institution. For Bellamy, museums are like tombs, preserving artworks in the absence of the communities in which they “lived”; those communities or scenes are, by their nature, unrepresentable. This tension between the work of art—painting, poem, film or essay—and the context that gives rise to it—the self, its scene, all its others—courses through all five chapbooks. It’s a productively unresolved tension, in which the personal or social is sometimes the core of the work, and sometimes the lens through which the art is refracted. Or, as Wang writes: “I want to care about art / but I only care about people.”