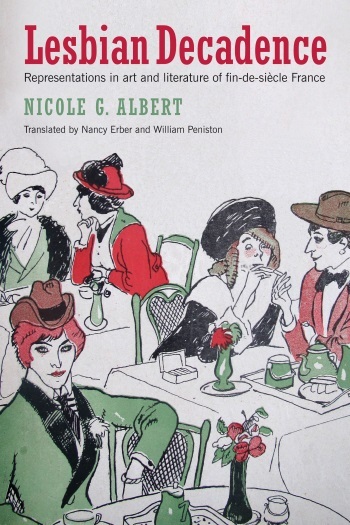 If the supposed “invention” of the homosexual took place in Great Britain and Germany, then some of the ideas concerning contemporary lesbian identity were definitely cast in France. Due to linguistic, cultural, and legal barriers, existence of the 19th century French lesbian for those in English-speaking countries got buried under Degas’ ballerinas, Gaugin’s Tahitians, and Toulouse Lautrec’s can can dancers. “Paint me like one of your French girls” takes on a whole new meaning in Nicole G. Albert’s book Lesbian Decadence: Representations in Art and Literature in Fin-De-Siecle France.

Albert is an independent researcher in France whose focus is women writers and gender studies. Lesbian Decadence is based on the dissertation she wrote for her Doctorate of Comparative Literature that she earned from the Sorbonne in 1998. In 2005, French publisher La Martinière published her dissertation in book form as Sapphism and Decadence in Turn of the Century Paris (Saphisme et Décadence dans Paris fin-de-siècle). And while we could not ask for more masterful English translators of Albert’s book—Nancy Erber and William Peniston—each an author of a scholarly book about turn of the century French sexual identities, as well as co-editors and co-translators of the French Queer Lives: Men’s Autobiographies from Nineteenth Century France and Bougres de vies: Huit homosexuels du XIXe siècle se racontent—the English title “Lesbian Decadence” and the French “Sapphism and Decadence” have slightly different meanings. In nineteenth century France, lesbians were called Sapphists in poetry and the media, and Decadence was, according to Albert, “a literary movement or, more precisely, a state of mind and an era, often referred to as fin de siècle, the golden age of the lesbian, so to speak.” Unlike Romanticism, which celebrated nature and love for the natural, the Decadent Movement celebrated the unnatural and the unhealthy in order to shock the bourgeois class into improving society.

Thanks to Napoleon, whose civil and criminal codes served as the basis for modern French law, lesbianism was never defined as criminal behavior in France. In fact, no consensual same-sex activities between two men or two women were criminalized. At the same time, lesbians did not become visible as a community until the late nineteenth century, and mainstream French society viewed them as indecent and a sign of the end of civilization. The French court forbade poet Charles Baudelaire the freedom to publish Les Fleurs du Mal (The Flowers of Evil, 1857) with all of its lesbian content for nearly 100 years. Twenty years after the censorship of Baudelaire’s poems, however, a visible lesbian community who documented their existence began to emerge in Paris at the same time as the golden age of French literature and art, known as the Belle Epoque. During this same period, other straight French men wrote about lesbians and depicted them in art, often to titillate other straight French men. While gay men were often portrayed in the mainstream French media as harmless, effeminate cross-dressers, straight French male authors wrote some of the first lesbian pulp novels with predatory lesbian characters and plenty of sex scenes. Meanwhile, doctors and pioneering psychologists who read publications from Great Britain, Germany, and the United States began to medicalize lesbians in the attempt to “cure” them.

Albert’s book is a treat for American LGBT Studies researchers. She provides us with a treasure trove of paintings, drawings, and cartoons that depict the French lesbian at the turn of the century—some created by lesbians, and some by straight men—as well as passages that describe these same lesbians from novels, poems, and newspaper articles of the period. She then compares these depictions of French lesbians to those of French moralists and psychiatrists who either condemned their existence or took pity upon them as disordered souls. Albert’s Lesbian Decadence will not only be cited heavily in future nineteenth century LGBT Studies research, but it brings the amazing scholarship of Erber and Peniston to light as well. Best of all, due to its multiple illustrations, it is a fun read for academic non-fiction, and will inspire us in English speaking countries to learn more about our French cousins.

'A Life Like Other People's' by Alan Bennett
'Gay Bar: The Fabulous, True Story of a Daring Woman and Her Boys in the 1950s' by Will Fellows & He...
Burn, Bodice, Burn