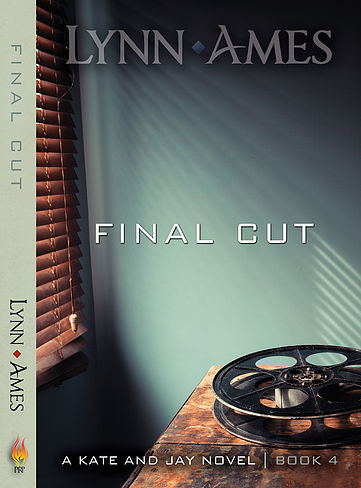 Jamison Parker is a best-selling novelist. Her wife, Katherine Kyle, was former Press Secretary to President Charles Hyland. In a previous story in the Kate and Jay series, these women saved the life of the President of the United States while battling a sinister and secret organization called “the Commission.” As Final Cut opens, thirty years have passed since that traumatic experience; and these two women have moved on with their lives—or have they? All is not well in the relationship between them and, as Jay is just about to launch a new novel, a blockbuster work of fiction based on the events of the past, everything comes crashing down around them.

A friend is on the run, accused of espionage, and old contacts team up with Kate and Jay to try to help him. Cyber-intrigue ensues as they try to discover who has framed Sebastien Vaupaul and why the Black Night has opened old wounds by hacking into the highly classified Hyland Report. In the midst of this turmoil, Kate is concerned about the chasm that has developed between her and Jay, and she struggles to look for a way to close the gap and re-establish their bond. Their difficulties are made worse when the FBI starts harassing Jay.

Among the swirl of chaos, there is one bright light shining on these two. Kate and Jay have recently met two people from another story, Dara Thomas and her wife, Rebecca (All That Lies Within). These new friends prove to be a refreshing and stalwart support for the older women during this difficult time. Dara is not only the famed Hollywood actress, she is also acclaimed author, Constance Darrow, which is a secret to all but her wife and her agent. With a cadre of connections, Dara and her screenwriter wife have a lot to offer in addition to moral support.

As the political plot thickens and the main characters’ relationship becomes more complicated, it’s easy to become caught up in this heart-pounding story of delicate balances among all the characters in play. When Black Quill Publishing is scared off by the Feds and refuses to publish Jay’s book, it’s Dara and Rebecca who propose a daring alternative, and Dara, who has proven to be more than just a pretty face on the silver screen in the past, comes to the rescue with a plan, which she manages with skill and aplomb, that is, until the government tries to put a monkey wrench in her works, too.

Final Cut is a well-executed, complex story. The integration of characters from two different books a masterful combination that works perfectly for this tale. Dara and Rebecca are a wonderful surprise when introduced. It feels like bumping into friends we haven’t seen for a while and we are delighted at the encounter.

The subplot of political and cyber-conspiracy is woven throughout this tale and impacts the lives of the two main characters in such a way that the mystery must be solved in order for Kate and Jay to come to any resolution in their own lives together. The tension these issues bring into all the characters’ lives serves to keep the reader turning pages and Ames has executed an extremely clever story filled with strong, vibrant women. Just when the reader starts to accept the level of tension in the characters’ lives as status quo, Ames ratchets it up another notch to make our hearts pound a little more quickly, until, finally, all the pieces begin to fall into place.

This scintillating tale can best be summed up in character Dara Thomas’ own words (used to describe Jay’s book): It’s got characters to root for and to fall in love with, it’s got characters to boo and hiss at, it’s got tension, drama, and angst. It also has moments of tension-breaking smiles, too. In other words, a not-to-be missed tale, but reader beware—it will be difficult to put this one down.