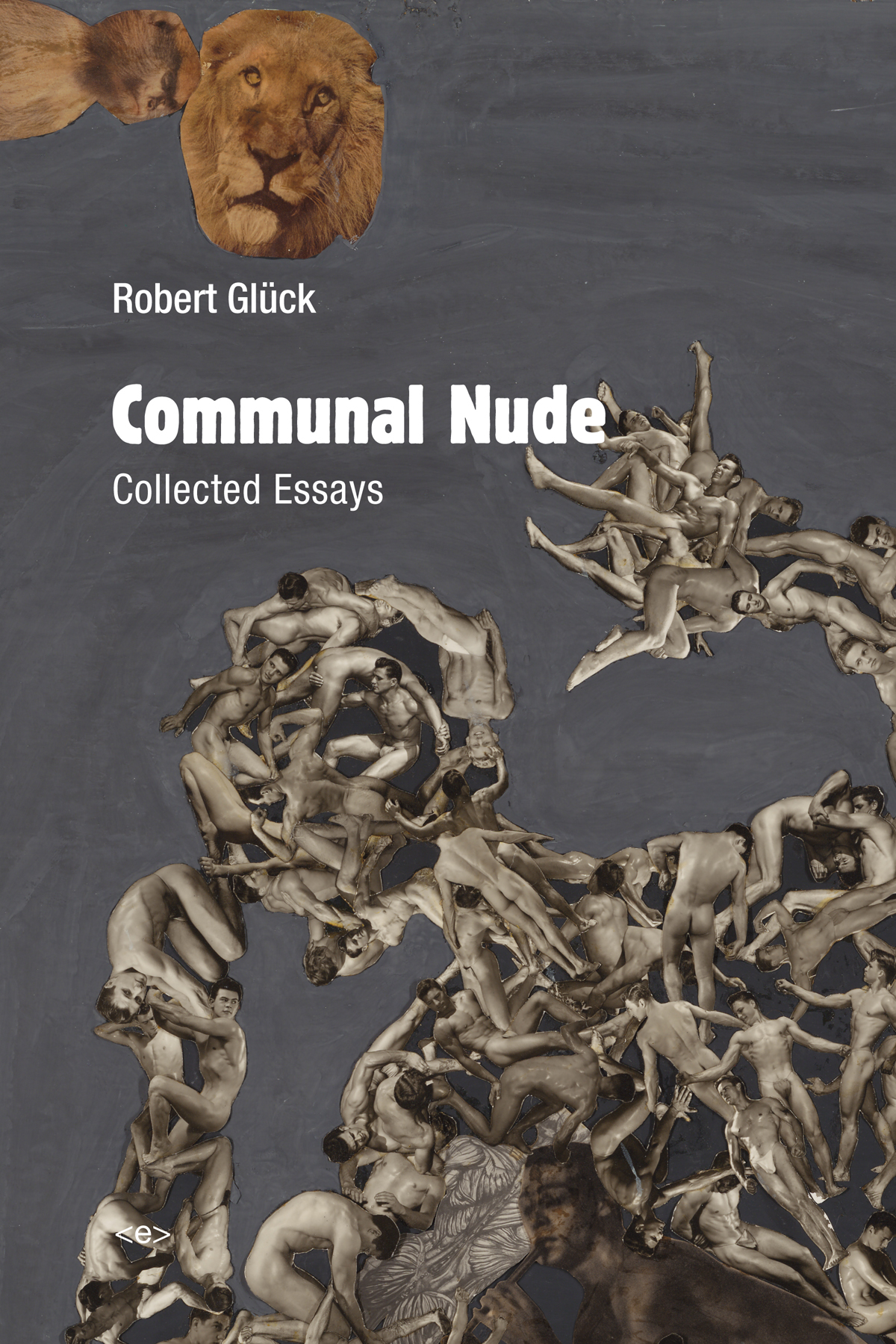 Robert Gluck is one of our foundational queer literary figures who has been dramatically under-recognized. His work has been adored by other writers, many of whom studied with him over the decades. Books like Jack The Modernist, Margery Kempe, and Reader have passionate fans, but he has not been as well known as some of his peers: Kathy Acker, Lynne Tillman, Dennis Cooper. Long part of the San Francisco experimental/queer overlay, Gluck, along with Kevin Killian, Dodie Bellamy, Bruce Boone (to whom this volume is dedicated), Camille Roy, Jocelyn Saidenberg, Aaron Shurin, and others who have since died of AIDS (Bo Houston, Sam d’Allesandro, and Steve Abbott) have built an influential literary community, movement and conversation rooted in the Bay, with reverberations national and global. Much of his hybrid work, called “New Narrative,” has included non-fiction tropes. As Gluck points out, like Sappho and Catullus, he uses people’s real names, even in novels sometimes. Communal Nude, however, is the first collection of his critical ruminations, reflecting a long life of literature, art, the aesthetics of daily life, and the grace and nuances of relationships.

This book is a social history of avant garde poetics, filled with names and gossip, genealogies of ideas rooted in community based presses, storefront venues, parties, friendships and neighborhoods. In this way it is a document of the distant past when cities belonged to the open-hearted rejects of the regions, who then produced global art ideas for the world. Now cities are driving out everyone on the social and economic margins, and Gluck’s San Francisco is a cracked-out wasteland of natural beauty holding a new class of wealth indifferent to the arts or philanthropy. Even he, now married in his seniority, has moved to Sweden. But in this volume poets and queers are once again, as Gluck puts it, “heroic.”

But this is also a deeply personal book about sex and love between men, and the process of integrating those realities with a vigorous intellectual life. This intimate layer of the story begins in 1966, at age 19, when Robert lies on a psychological test interrogating his conceptions of men and women. Deliberately misrepresenting his perceptive abilities, he dumbs down understandings and mutes observations:

It’s strange to invoke all this antique fear, the terror of track and field, injured pride at the bus stop, the ambient sarcasm that never got an edge on its enemies or even found them. I did feel guilt for not being the oaf I described. Any fiction, any version of the self wants you to become it. That’s why a dishonest fiction is immoral. I laughed with vertigo when I was told in confidence by the chatty examiner that I’d received the highest score.

Most striking to me, looking back on this paragraph, first published in 1999, is how gorgeously independent the writing is. Gluck is a high stylist with low pretensions. He has a distinct voice that comes from both feeling and ethics, and a graceful, elegant command of word order. Craft lets him change to second person for one moment, shift to philosophical statement, and return to emotionally driven story, within a handful of lines. Gluck’s is a personal literature that is deep, funny, unpredictable, enlightened and often somewhat sad.

Gluck’s subject range is vast and contains many large subjects: allegory, Lacan, Charles Bernstein, teaching, the social meaning of experimentation, the aesthetics of class. Modernism is constantly being addressed. He quotes elaborately from others, not only to invite us into his concerns, but repeatedly to insist on community. And he also addresses his own work. Margery Kempe, (Serpents Tale, 1994) my favorite of many wonderful works, is an autobiography of love told through and adjacent to the story of this 14th century mystic who had sex with Jesus Christ. Robert also appears in this novel, and his boyfriend is also Jesus, or maybe he just thinks he is. In this way we are revealed by history, by juxtaposition, by entering other people’s stories.

He is often quite funny. Like the time Gluck realized that his bar mitzvah portion had been on Sodom and Gomorrah. Or, when describing the experience of getting divorced at exactly the moment that so many gay men in San Francisco were getting married. Short reports of sexual fantasy and experience dot the collection.

Every so often while making love with Chris, I imagine that we are in a bathhouse or sex hotel, and that men are lounging outside our door, watching us, and finding it interesting that a thirty-one year old is fucking a fifty-year-old and vice versa. I suppose that little crowd is the gay community, and in some way our sex and our lives belong to it, although of course our lives are entirely our own. When Chris and I are in a position that separates us—say, he is standing behind me—I think, a young man is fucking an old man, but when we’re tangled up together, it’s just Chris and Bob merging in a sweet blob.

This is a cumulative accounting of Gluck’s interests: socialism, moral language, AIDS, movie stars, art stars, his house in San Francisco, and men. Dead and dying, living and yearning. It is part of the secret history of gay literature, the one not yet taught in school.