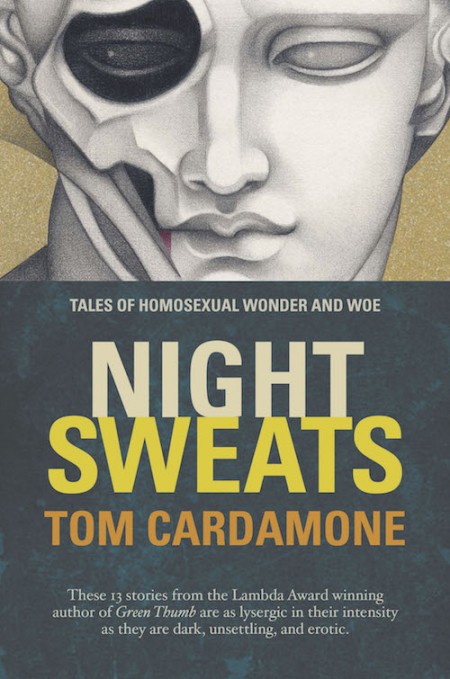 Night Sweats, Tom Cardamone’s second collection of short (emphasis on short—four of the stories are four pages or shorter) fiction, is a worthy successor to his Pumpkin Teeth, which was nominated for both the Lambda Literary and Black Quill awards. This collection, like his first—and befitting a compendium of mostly horror—contains thirteen stories: seven are reprints, and six are original to the collection. But be warned: none of the stories in this slim volume are trivial.

For all that the subtitle of this collection is “Tales of Homosexual Wonder and Woe,” not every story has an overt gay character in it:  two of the shorter stories (“Overtime at the Beheading Factory” and “Rising Sons”) do not, although it is possible that they contain covert gay characters. In any event, the sexual orientation of the characters in these two stories is not germane to their overall narratives; the remaining stories all contain at least a single gay character, and their orientation impacts the narrative to a lesser or greater degree.

That tiny quibble aside, Cardamone’s stories do contain plenty of wonder and woe, for they all fall squarely in the speculative fiction camp, populated by superheroes and supervillains, demigods, fairies, and alphabetic demons. Two longer stories examine super-powered humans. Cardamone himself has written elsewhere about the use of super heroes as metaphors for the Other (for example, Superman is literally an alien) and thus how they can represent any number of minorities, especially LGBT individuals.  (The title of one of these stories—“Kid Cyclops”—is also a clear nod to The X-Men, who have long typified the mutant outsider within the human midst.) Cardamone, however, intensifies this trope in “The Ice King” by making both the protagonist and antagonist gay, mirroring each other, and showing the effects of either self-loathing or self-acceptance.

Short these stories may be, but that doesn’t mean that they’re lightweight. Much like the box of chocolates in “Mutinous Chocolate” (which produce extreme sensual experiences for the narrator of that story, especially when eaten before or during sex), this collection contains a heady mix of subtle, understated wonder, unmitigated horror, and powerful eroticism, with each story working its individual magic on the reader.