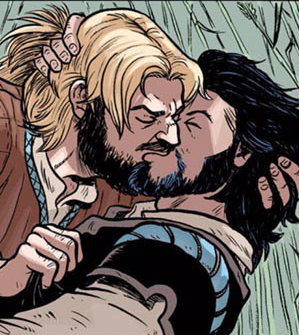 If “lesbian revenge thriller” doesn’t peak your attention, Korean film The Handmaiden, an adaptation of Sarah Waters’ novel Fingersmith, is sweeping its way through the film festival circuit.

I don’t know how many of you are aware of what Eurovision is, but the show is getting some flack from Russia. Each European country submits a song to the competition, typically full of glitter and theatrics. Eurovision 2014 brought us Conchita Wurst in the midst of Russia’s anti-LGBT legislation, to which a petition referred to the competition as “a hotbed of sodomy.” This year’s winner is unusually political and some Russians claim their loss was due to the “demonetization of Russia.” Decide for yourself:

Nicole Dennis-Benn and Marlon James discuss being queer and Jamaican with Out:

Nicole Dennis-Benn: What I realize as a writer is the love/hate relationship I have with the country. Love, because it’s a place where my childhood memories are buried and where my family still resides. And hate, because I resent the reasons why I felt I had to leave in the first place. I couldn’t have written about Jamaica had I stayed.

Michael Broder has been working on an online archive of poems centered around HIV leading up to June 5th, 2016, which is the 35th anniversary of of the first CDC report on HIV.

Merry Men from Oni Press approaches the legend of Robin Hood in a queer, yet historically researched way:

We have almost no historical record of same-sex behavior, much less same-sex identity, in early English history; it absolutely existed, but scarcely anyone wrote about it. As a matter of fact, we decided that the five issues of Merry Men would each feature a chapter in a text piece I’d write, called “A Queer History of England,” profiling a different figure from English medieval history who was either gay or transvestite or transexual. And once I got into it, it was quite a feat coming up with five subjects, and I’m pretty well versed in English history.

But for that reason — meaning, the lack of documentation — it was actually easier to imagine what these characters would be like. There wasn’t anything to contradict my ideas; if I was anachronistic, who’s to say? Though I did try to be as historically faithful as possible.

Greg Barrios has a new play called I-DJ. In an interview with NBC news, Barrios discusses his work and the intersections of gay and Chicano identity.

(Images via Vogue and Unicorn Booty)