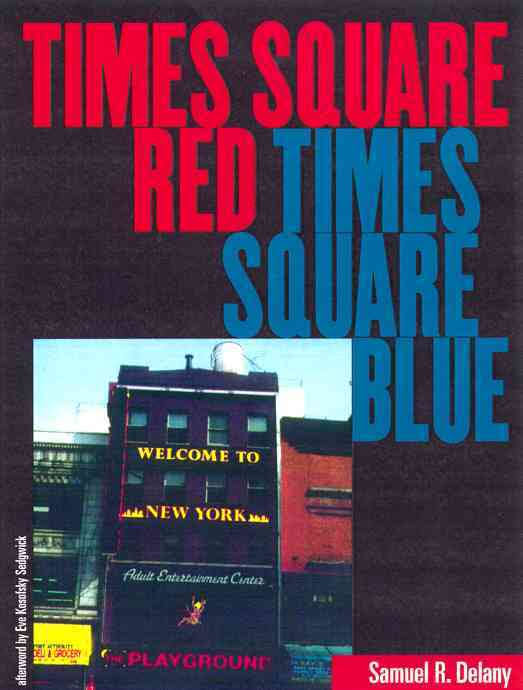 “Show World Center is one of the places that may escape the move—so there’ll still be a little color left, a few memories of an older Forty-second Street,” writes Samuel R. Delany in his cult classic, Times Square Red, Times Square Blue, as he laments the loss of the infamous peep shows, sex cinemas, and street hustlers of 42nd Street. The result was a safer, more sanitized New York, void of the grit that made it famous. I was always searching for traces of Delany’s fabled Times Square—a piece of queer history, which I was reluctant to let go. When I learned that this Show World Center still exists on 8th Avenue, just down from 42nd, I visited with hopes of finding remnants of this old world.

I ventured down 42nd Street to 8th, past the herds of families sedated by the neon lights. Some seemed paralyzed even, making it difficult to pass as they gazed at this glowing mirage through the zoom finders on their phones. I looked up, at the cluttered billboards stacked upon billboards, while brand names hypnotically flashed in our collective subconscious: Chase, Champs, Samsung, Sephora, McDonald’s, and Coca Cola. Times Square had been reinvented from Delany’s days into nothing but a capital-infused carnival to inspire us to work hard and buy harder.

It was hard to imagine that this tourist trap was home to adult theatres, parlors and peepshows back in the day. In 1977 there were 96 of these venues in Times Square alone, which was reduced to 35 by 1987. All that’s left today is Show World Center, a peep show and handful of porn shops. “The Forty-second Street Development Project wants families to spend their money here. So the visible signs of sex have got to go,” Delany writes. The fear of HIV / AIDS had been used to validate such ambitions. In 1985, sexual acts in public became prohibited by law, even with condoms, and by 1995 the city gave the sex cinemas in the area a year to vacate so that renovations could be made for their master plan. New York would never be the same.

There were two cop cars parked outside of Show World Center as I approached, which made me wary. An online review claimed that this place had become but a breeding ground for drugs and prostitution, so I was somewhat apprehensive. The place turned out to be nothing but a dumpy porn shop with stark florescent lights that accentuated its decrepit state. The man behind a counter was talking to another guy in sunglasses but they both stopped and stared at me. “Do I need tokens or something?” I asked. The man shook his head and without saying a word motioned for me to enter into the side hall.

The hall was dimly lit with a series of booths and screens inside all the way down. Although some doors were closed, it felt lonely back there, like I was the only person in the place. Suddenly out of one of the booths came someone who I thought to be the cleaner, since he had a blue towel in his hand. When he placed the towel over his mouth and huffed, I realized that he wasn’t the cleaner—he was just high. As I walked away, he started following me through the halls, cruising I suppose, and almost fell into me at one point. I eventually lost him.

At the end of the hall was a staircase that was chained off. An Arab kid in his twenties was hanging out with a strange looking fellow with wild, frizzy hair and sunglasses. “What’s downstairs?” I asked the kid.

“Believe me, you don’t want to go down there,” he said with a chuckle. His friend stared at me through the tint of his glasses, to which I responded with a nervous laugh.

I looped back through the halls and found another staircase but it wasn’t chained off or guarded. Without hesitation I descended into the basement, slowly. My heart was pounding, step-by-step. Funny thing was, the stairs just led to a closed off room with shelves and shelves of old crossword puzzle books, along with some out-of-date TV Guides. I laughed—how silly.

I had desperately hoped that there was an ounce of color left from Delany’s Times Square but it’d all faded away. Show World Center was but a ruin that lacked the spirit and sensuality that made that era so unique in my mind. I left and walked back across 42nd. I joined the herd and allowed myself to be sedated by the safer and more sanitized New York City.

'If This Be Sin' by Hazel Newlevant
Book Lovers: Raining Men
'Boys, An Anthology' edited by Zach Stafford and Nico Lang