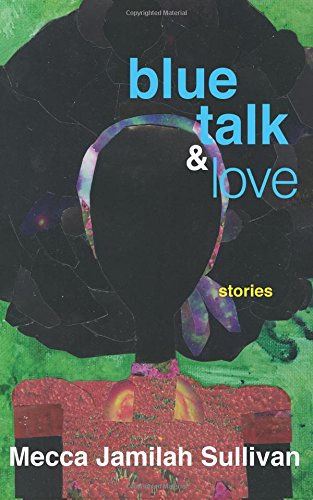 “You! What’s wrong with your body?” demands Malaya’s dance teacher in “Saturday,” one of fourteen exquisitely crafted stories in Mecca Jamilah Sullivan’s debut collection. Malaya, who we’ve first met at a weight-loss support group, is eight years old, and she has missed a step. Mrs. Rhymes won’t let it go: “You got to be in your body, girl! Move your arms! Your feet!” Malaya responds by dissociating, floating through the rest of the dance, daydreaming about going to sleep and waking up “long and lean and limber–waking up “right.”

The stories in Blue Talk & Love center on black and brown girls and women with “wrong” bodies—big bodies, fat bodies, queer bodies, disabled bodies; hungry, unruly bodies—who take up space, and desire, nonetheless. An award-winning writer and playwright and a scholar of gender, sexuality, and literature; Sullivan constructs her characters’ embodied lives with tender detail, attuned to the various ways in which their voices and desires both exceed and are constrained by their corporealities.

Most stories in Blue Talk take place in Harlem, where Sullivan grew up, or in other areas of New York. Sullivan’s New York is richly textured: alive with language and music, story and history, charged with both want and pain. “Wolfpack” opens the book with the story of the New Jersey Four, four queer women of color who were sentenced to prison in 2007 after defending themselves against a man who threatened to rape them in the West Village. Adopting alternating points of view, Sullivan gives voice and representation to women who were subject to cruel misrepresentation. “I felt there was an important piece of the case that no one was talking about,” she says in an interview with Nicole Dennis-Benn, “–how the layers of systemic violence were replicated and echoed in the language used to talk about their case.” The story exposes this violence while also emphasizing the intimacies among the women, especially the sweet solidity of Vernice and Luna’s love. When the group finally encounters this man on the street, the injustice crackles through like lightning, the prose running hot with grief.

“A Strange People” also draws on history, bringing new life to Millie and Christine McKoy, African-American conjoined twins who were born into slavery and owned by various showmen for most of their lives. Sullivan adopts an innovative first-person plural perspective to narrate their story, the frequent shifts between “We-Chrissie,” “We-Millie,” and “we” amplifying the antagonisms between the two sisters and their warring perspectives. But these animosities quickly get eclipsed by the entrance of a white showman’s perspective. As he watches them audition, he transforms the sisters to an “it,” a singular “creature” dehumanized and made painfully grotesque through his eyes. Sullivan’s skillful manipulations of perspective, here and throughout the collection, complexly attend to difference and power, particularly as it inscribes racialized and othered bodies.

Many stories in Blue Talk feature a delicate touch of magic; a few venture fully into the realm of the fantastic. “The Anvil,” for example, adopts satirical fabulism to provide a kind of counterpoint to Malaya’s escapist daydreaming in “Saturday.” Like Malaya, the protagonist uses fantasy to cope with her hunger—but in this case, her fantasies actually allow her to regulate it. It starts with a particularly delectable daydream, the experience of which is so delicious the narrator comes back to reality to find she has eaten the class gerbil. “Since then,” the narrator tells us, “I have eaten many things. Telephone cords, fire hoses […] Once I gave animals up in favor of other less fattening, synthetic items, I dropped fifty pounds, and [my mother’s] love for me increased tenfold.” With perverse absurdism, Sullivan excoriates fatphobia and American dieting culture—bitingly. “Now that I am thin and famous,” the narrator concludes, “I can tell you with certainty that people will tolerate almost any strange behavior as long as you don’t eat too much food.”

Throughout this assured collection, Sullivan presents characters who defy the limits of their bodies and circumstances, who dare to hunger past shame, who pursue desires and ambitions they are told not to have. This book is full and invites its readers to want. We want to read more from this writer.

Edwin Frank: Queer Aspects of The New York Review of Books
'Zero At The Bone' by Stacie Cassarino
'Desert Boys' by Chris McCormick

M./Maybe Henry Milks is the author of Kill Marguerite and Other Stories and three chapbooks, most recently The Feels.