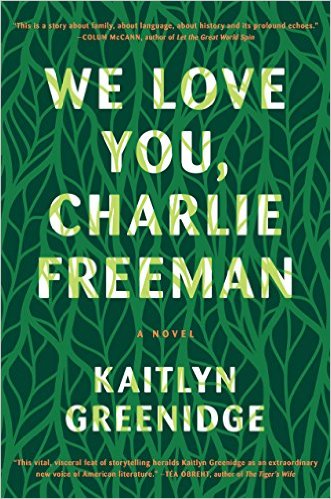 If ambition is defined as a strong desire to achieve, then Kaitlyn Greenidge’s astounding debut We Love You, Charlie Freeman is the very definition of ambition realized.

The Freemans are a family chosen to live at the Toneybee Institute and raise Charlie, a young chimp, as their own family member. The black family is chosen by the institute for their ASL language skills. Laurel Freeman is determined to mother Charlie, and her husband Charles Freeman is grateful for the greenery surrounding their new home. The narration rotates between the Freemans, including the two daughters, young Callie, who is enthusiastic of her family’s new brother, and teenage Charlotte, who is surly and unsure.

In Charlotte, we find a coming of age story layered with crucial ideas around identity, loyalty, secrets, and activism. At her new school, she finds that the mostly white students are loathe to believe she is not from the black part of town. When Aida Breitlin, a black girl with a shaved head and purple feather earrings, enters her class, Charlotte takes notice: “The whole class, I read the length of Aida Breitling, from the curling ankh to the flop of that heavy skirt, and I thought that I knew her […] To be that beautiful and also that willfully strange did not make sense.” Readers who have spent years squinting for queerness in good fiction will recognize what is blossoming in Charlotte. Her attention to Aida is gorgeously complex, earnest, and sensual. Aida lives with her artist mother Marie in a bohemian house (“Mattresses are colonialist,” Aida says of the pile of blankets where she sleeps). Marie and Aida constantly banter about black culture and the insufferable whiteness of their town. As Charlotte leans into her feelings for Aida, her family at the Toneybee is unraveling with the needs of Charlie and the experiment. Charlotte catches her mother with Charlie one evening and is forced to keep a secret that will eventually undo them. Her mother’s narration is an aching portrait of ambition. Meanwhile, Callie develops a damaging relationship to food, while clamoring for Charlie’s love and affection.

Her mother’s narration is an aching portrait of ambition. Callie develops a damaging relationship to food, while clamoring for Charlie’s love and affection.

While the story of this family alone could carry the novel, Greenidge expertly weaves in the history of the Toneybee, as told by Nymphadora, a member of a secret black society in 1929 who meets the original scientist from the Toneybee. Nymphadora is a character as carefully created as the rest, sharp with desire and vulnerability. As the novel unfolds, Nymphadora’s risks become a powder keg which exposes the Toneybee Institute’s racist history and original intentions. The escalating conflict fractures the Freeman family in a heartbreaking crescendo.

It does not give away the ending to praise the epilogue, which shows Charlotte as a healthy, happy married queer woman, an ending so rare among lesbian characters that it stands out. Above all, the novel’s meditations on race, identity, and responsibility are a triumph. As Charlotte gently explores Aida’s body, she wants to call it love, but knows better when Aida says, “We don’t want to go queer like white girls do.” It’s a stunning moment of heartache and burden. Another remarkable chapter is written as a letter from Mrs. Toneybee herself, a rich white woman with good intentions and cringe-worthy ignorance. That the novel is able to combine ASL culture, race, ambition, family, love, politics, and history, as well as the nuanced Charlie, is a marvel not to be missed.

'The Covert Captain: Or, A Marriage of Equals' by Jeannelle M. Ferreira
'Crudo' by Olivia Laing
H. Melt: On Imagining Trans Liberation