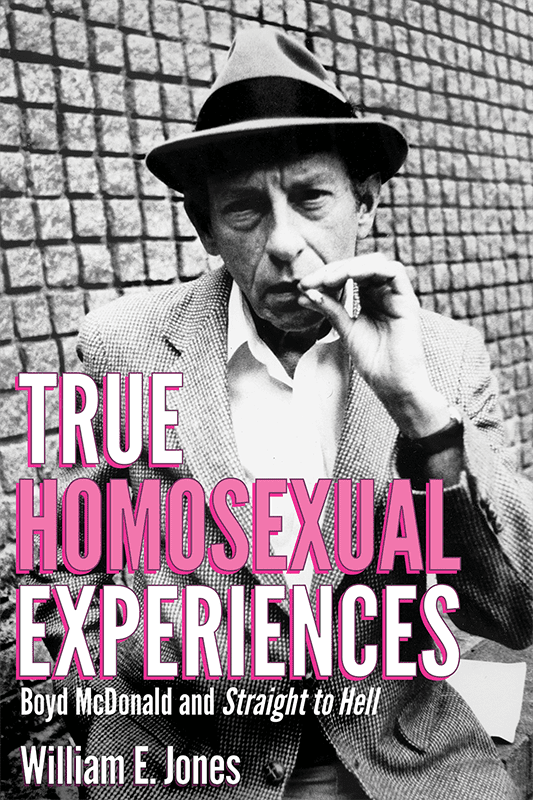 As with the recent interest in Samuel Steward, the Midwestern sex chronicler and tattoo artist, gay scholarship has begun to recover the legacy of gay men from the pre-Stonewall generation, who were part of a thriving homosexual underground. These were the sexual outlaws and renegades who found their homosexuality as an alternative to the conformity of heterosexual America, which Boyd McDonald characterized as a “sexual dictatorship”

McDonald was one of the literate stars of this underground. Known for his homoerotic series of chapbooks, Straight to Hell, beginning in 1973, he published the true stories of men who had sex with other men. McDonald’s focus was on sexual accounts from all walks of life. Inspired by Gore Vidal’s 1968 satirical novel, Myra Breckinridge which was denounced as obscene by conservatives, McDonald embarked on a radically, offensive publication, one that avoided the sexless influence of middle class gay mores that sought to whitewash the homosexual experience in order to present a more palatable image of assimilated gays to the general society. This political strategy was successful in achieving gay marriage and more tolerance, but, in the opinion of McDonald, came at a cost.

McDonald, himself, like Samuel Steward, was a product of the elite university system. McDonald, a Midwesterner by birth, graduated in 1949, after service in World War II, from Harvard University, which he entered on the GI Bill. Classmates included John Ashbery and Frank O’Hara. Ashbery remembered McDonald as “rather colorless in appearance and personality, with absolutely no hint of the sex guru he was to become.” When asked by an interviewer whether Boyd had much sex at Harvard, McDonald answered, “No, I didn’t want any. I was completely occupied by my books and papers. “

McDonald’s concentration at Harvard was American History and Literature. After graduating he worked by his own admission as a “hack writer” for Time magazine. This was followed by IBM’s Think magazine in 1957 where he was an editorial associate. Boyd’s phase of life in corporate America was described by a friend as “one long bender.” A severe alcoholic for most of his early years, he sobered up in 1968 after drying out at Central Islip Psychiatric Hospital. Having lost his apartment and his livelihood, he applied for welfare and found a place to live in an SRO (single room occupancy) hotel in New York City. Eventually he moved to Riverside Studios on West 71st in Manhattan, where he would spend the rest of his life in a tiny single room, sleeping on a cot.

Suffering from mental illness including depression and agoraphobia, he gradually withdrew from society although continuing to correspond with others and carry on phone chats. A cultural outsider, McDonald chose poverty over bourgeois and bohemian pretensions. Boyd “flipped a finger at everything that was false and turned it into a biting joke.” “Downwardly mobile,” Boyd appreciated working-class men, reveled in sexual filth and defied the norms. In Straight to Hell he wrote essays “that expressed a range of class antagonisms and resentments normally repressed in mainstream American culture.” But his life of defiance took its toll. Always a chain-smoker and drawn to a subsistence on doughnuts and coffee, McDonald’s health steadily declined until his death in 1993.

An avid reviewer of old movies, Boyd wrote a book, Cruising the Movies: A Sexual Guide to “Oldies” on TV in 1985. His fascination with female stars such as Barbara Stanwyck paralleled the star worship of gay men of his generation who saw in female film dialogue, the tough talk and transports of emotion, a way of venting their own sexual frustrations.

For the most part William E. Jones has written an informative and original book. He does digress toward the end of the book towards research into historical precedents for Boyd’s work. This was perhaps the weakest section, making rather unconvincing case parallels with Robert Burton’s The Anatomy of Melancholy and the Menippean satires of the 3rd Century BCE.

All and all though it is scholarship such as this, which is doing the necessary and vital work of revising the gay history of late twentieth century America. Boyd McDonald, the curmudgeon, the “Ivy League Fuck-Up,” the sexual provocateur and satirist, is resurrected in all of his controversial ways to his place as a key figure in the American underground.

'How We Fight for Our Lives' by Saeed Jones
Eileen Myles Gets Her Due, the Film Adaptation of 'Dancer From the Dance', Trans Poetics, and More L...
'The Island of No Secrets and Other Stories' by Lou Dellaguzzo