‘The Making of the American Essay’ Edited by John D’Agata

‘The Making of the American Essay’ Edited by John D’Agata 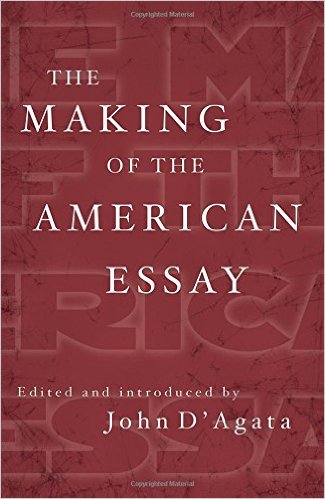 The Making of the American Essay is the third volume in an ambitious project that casts far and wide for exemplary contributions to the essay as a risk-taking work of art. It’s tempting to call it mind-blowing (it is), but with the qualifier that it’s not mind-blowing in the same way that, say, Gone Girl was. There are no big spoiler moments, and it’s possible you read many of the pieces gathered here with no small amount of resistance in high school or college. But taken cumulatively, and with John D’Agata’s introductions offering harmony here, counterpoint there, the total package is overwhelming, far-reaching, and feels very much like our collective home.

After a brief introduction, the book opens with a series of epigrammatic notes from Anne Bradstreet to her son. “Authority without wisdom is like a heavy axe without an edge; fitter to bruise than polish.” A long captivity narrative from Mary Rowlandson follows, along with other pieces chockablock with Bible verses, fire, and brimstone, after which the transcendentalists turn up and urge us all outside for some fresh air. There are two takes on the 1963 prize fight between Floyd Patterson and Sonny Liston, one from Norman Mailer and the other from James Baldwin. Gay Talese’s “Frank Sinatra Has A Cold” and N. Scott Momaday’s “The Way to Rainy Mountain” make unusual bedfellows as well.

Sometimes the introduction steals a bit of thunder from the essay it’s hosting. A short piece dated 1924 relates how Ansel Adams found his unique style as a photographer one day when, short on film and time, he used filters to radically alter the view of Half Dome and in so doing created a photo that conveyed a more vivid sense of the mountain than photorealism could hope to capture. It’s artful and fitting that this vignette is used to introduce Gertrude Stein’s “If I Told Him: A Completed Portrait of Picasso,” but also impossible to divorce the experience of reading one from the other.

D’Agata is director of the Nonfiction Writing Program at the University of Iowa, so it’s in his interest to promote nonfiction as a relevant art form. His introduction to John Cage’s “Lecture on Nothing” describes the composer’s silent piece of music, “4’33””, which confounded critics. But look at any bit of the “Lecture” and consider this year’s GOP debates. Even from the atonal chanting of insubstantial bromides, the fruit salad of a life can sometimes be divined. This stuff still resonates.

This reader hasn’t tackled the volumes that preceded The Making of the American Essay–they deal with contemporary American works and the ancient and international foundations of the craft. Here we find ourselves in the lengthy middle place where emancipation begets segregation and where lives consigned to the sidelines are just beginning to find defining narratives. If the voices collected here make for an atonal chorus that pulls in all directions, that speaks to the quality of D’Agata’s choices. Look into this collection, and you’ll likely see yourself reflected somewhere.

'A Year From Today' by Stacy Szymaszek
‘The Days of Anna Madrigal’ by Armistead Maupin
'Stage Fright: Selected Plays from the San Francisco Poets Theater' by Kevin Killian