‘The Cosmopolitans’ by Sarah Schulman

‘The Cosmopolitans’ by Sarah Schulman 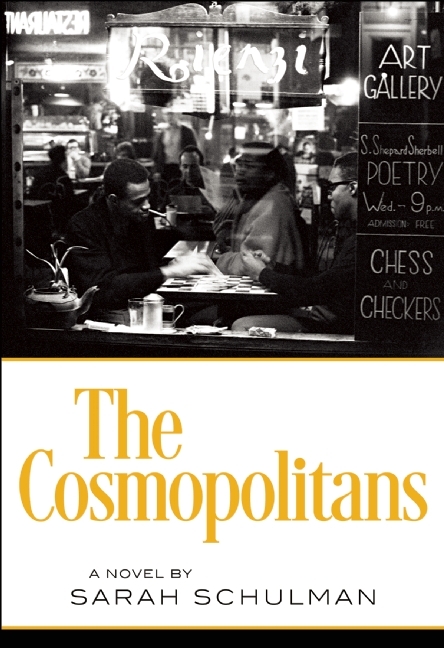 Welcome to 10th Street, Greenwich Village, 1958. This is New York City on the cusp of a new modernity: marketing, brands, and television are ushering in the commercial age, and Sarah Schulman’s latest novel, The Cosmopolitans, is set right in the thick of it.

The Cosmopolitans opens with Bette, a white secretary exiled from her Midwestern family, watching the world outside her second-story apartment the way others do movies. Life teems below, and Bette—single, in her 50s, nurturing a longstanding unrequited love—is keen to it all, creating stories to fit upon her neighbors and passersby. As Bette watches, she waits for Earl—a black, gay actor, and her only friend—to return from his day at the slaughterhouse. The Cosmopolitans’ begins by painting an idyllic portrait of friendship between Bette and Earl, two misfits who have found each other in a world that barely notices them. For thirty years, Bette and Earl have been each other’s rock.

But this hard-won relationship is very soon shaken by Hortense—the daughter of Bette’s former lover, Frederick, and her cousin, Crevelle—whose unexpected appearance at first promises a new sort of family, but eventually threatens all that Bette holds dear.

Hortense is herself an outcast (or so she claims), an actress with big-city dreams and the misguided, self-absorbed drive (and money) to achieve them. Hortense, in her (sometimes not-so) ingenuous way, becomes the harbinger of enormous upheaval in Bette and Earl’s lives—crashing the past together with the future, leaving no character unaltered—when she lures Earl into an ill-fated relationship.

Schulman pays homage to Balzac’s Cousin Bette with her plot, but The Cosmopolitans is very much of its own era, using her characters to deftly examine through the cultural, political, and social mores of the late 1950s. The prose is erudite, capturing the essence of New York City’s intensity, finger on the pulse of change. In a fantastic side plot, the advertising firm Bette works for dips their toes into television commercials, finding almost too much success for their own good. The tv subplot fits perfectly with the book’s overarching themes of illusion and disillusion, delusion and desire.

Early on, Earl—desperate for love—says, “I want the truth to not be true”; perfect words for the ache of the human condition that infuses The Cosmopolitans. Loneliness is an animal that both Bette and Earl wrestle, though their ways of combatting this monster are very different. Romantics to the core, Bette and Earl are perhaps on the verge of becoming relics, each so caught up in their own yearnings that the truth becomes secondary. Bette rejects the television that her colleague has delivered, pining instead for her quiet evenings with Earl, while Earl casts Bette off in hopes of love, acceptance, and “normalcy.” In the end, Bette, whose constitution and intelligence proves strongest, surprises everyone with her meticulous and wily plans.

With the birth of commercial advertisements looming, the characters in The Cosmopolitans learn the hard way that not everything is what it promises to be. Plot twists keep the pages turning until the very last, and the cast of characters are engaging—unusual in the most refreshing ways. Sarah Schulman has given us a finely tuned, clever, and remarkably contemporary historical novel.