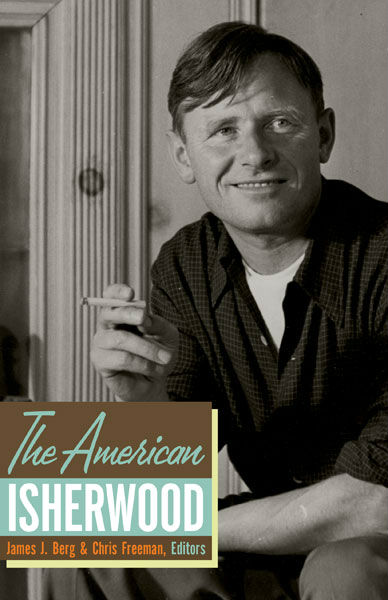 The basic tenet of the artfully edited The American Isherwood by James J. Berg and Chris Freeman (University of Minnesota Press) is that a writer owns nothing else but his experience. In this sense, Christopher Isherwood was an “existentialist,” not in a murky hopeless way but by firmly clutching the idea that experience counts as primary in our lives. “Because, after all, what else does he really have?” he asked about writers. The collected essays begin with Isherwood’s migration to the US in 1939.

“What I know is what I am,” Christopher Isherwood said. What he knew by the time he died in 1986 as a cis, white, gay man remains startlingly relevant to the current ultra-diverse queer universe. A “camera with its shutter open” is the most frequently used metaphor describing Isherwood’s work. Readers with shutters open will see parallels with the iconic writer’s struggles and today’s issue-making headlines.

The editors do a marvelous job of organizing the book into three sections and beginning each section with a piece that provides context for the essays that follow. The first section is devoted to Isherwood’s A Single Man. The second section considers the author’s well-known spiritual life and relationship to guru swami Prabhavananda. The third section focuses on Isherwood’s work as it relates to friends, Hollywood’s celebrity culture, and the reception of gay-themed writing in 1960s Cold War America. Richly detailed gems culled from Isherwood’s archive provide Berg and Freeman’s introductory pieces and the essayists’ portrayals with deep authenticity. Although at moments turgidly academic, the essays are accessible to general readers.

The book’s first section is a comprehensive look at A Single Man and its relationship to E.M. Forster’s Maurice and Virginia Woolf’s Mrs. Dalloway.

Following a visit with Isherwood, Forster began writing Maurice resolving that he would not let his story end tragically. The 81-year-old Forster subsequently explained: “a happy ending was imperative. I was determined that in fiction anyway two men should fall in love and remain in it for the ever and ever that fiction allows.” Like Isherwood’s fiction challenged, Woolf’s Clarissa Dalloway and “shell-shocked” soldier Septimus Smith explored “normative” mourning. She wanted her characters “to criticize the social system” in much the same way Jasbir Puar’s concept of “homonationalism” (Terrorist Assemblages: Homonationalism in Queer Times, Duke University Press) shreds current belief systems around equality if defined primarily by marriage and military service, the open happy endings Isherwood and Woolf’s characters were denied.

Threads lacing through the essays bring to mind that homosexuals are raised in a patriarchal society. Since many gay men now openly mature against a backdrop of post-Don’t Ask, Don’t Tell and court-supported same-sex marriage, are they filling the ranks of a new patriarchy? How is military service and marriage for gay men (and lesbians, bisexual, and transgender people) different from the old patriarchy that denied Isherwood’s George and Woolf’s Smith the satisfactions of open relationships? In Jamie Carr’s essay Writing the Unspeakable in A Single Man and Mrs. Dalloway, she quotes Erin Carlston’s Thinking Fascism: Sapphic Modernism and Fascist Modernity: “…to be disloyal to patriarchy – by flouting the paradigms of compulsory heterosexuality…is to be disloyal to the patria, to call into question the terms of one’s membership in the national community.”

For example, now that queer men and women are allowed to serve openly in the Armed Forces will they feel comfortable challenging military policies? Or will they acquiesce, fearing the tarnishment by the old myth that queers (Isherwood’s preferred term) are a new kind of security risk? Thus forming a new patriarchy. That’s Puar’s point regarding homonationalism: How LGBT “acceptance” and “tolerance” have become the barometer by which the right to and capacity for national sovereignty is evaluated.

In 2011, Sarah Schulman wrote in the New York Times about “the co-opting of white gay people by anti-immigrant and anti-Muslim political forces in Western Europe and Israel.” Maya Mikdashi writes in Jadaliyya (Dec. 16, 2011): “A gay Israeli in a military uniform is both an enemy and a target of anti-occupation politics, just as a gay Zionist in the United States is an enemy of the Palestinian cause and the cause of queer Palestinians because they are rooted within that Palestinian national cause.” In other words, does the kind of inclusion not socially acceptable in Maurice or Mrs. Dalloway but now allowed thwart resistance to military policies by LGBT soldiers because they fear a return to exclusion?

Perhaps Out in the Dark illustrates the tension between equal rights and political obligations to one’s nation. The film centers on the love affair between two men on opposite sides of the Middle East conflict: Palestinian student Nimer and Roy, an Israeli lawyer. Deeply in love, Israeli security forces eventually force Nimer’s deportation from Tel Aviv back to Ramallah, where he is immediately rounded up and killed by Palestinian militants for being a possible collaborator and for being gay. And even with full acceptance into the US military and marriage rights, Employment Non-Discrimination legislation (ENDA) has been introduced in every Congress since 1994 except the 109th. Similar legislation has been introduced without passage since 1974. Twenty-nine states do not have anti-discrimination statutes prohibiting discrimination and 38 do not have law prohibiting gender identity discrimination. Yet we can marry on Saturday, go to war Monday while a spouse reports to work and is fired for being gay. So the question becomes, how does a recently married, newly minted queer soldier in the US, Israeli or Palestinian army react to such circumstances? By towing the same line as Woolf’s Septimus Smith or Isherwood’s George who shielded his grief from those around him?

Isherwood both wondered and worried about the life of his queer community. After the 1954 publication of The World in the Evening, he received stacks of fan mail. He said at one point about the letters: “…it’s heart-breaking, the sense you get of all these island existences, dotted about like stars and nebulae” much like the alienation nouveau recently chronicled by a LOGO study–Gay Men in America: Community at a Crossroads–sampling 1,000 gay men ages 18-49.

Results reveal that while acceptance is at an all-time high, 61% of gay men in their 20s and 30s believe “in the past, the gay community was more united than it is today.” Eighty-five percent agree “even as gay people become more accepted, we should have places that are just for us.”

Six in ten gay men in their 20s say “now that gay marriage is legal in so many places, my family expects me to get married and have children one day” and perhaps populate a new patriarchy? Even though 88% agree “gay people shouldn’t have to conform to straight people’s norms and values.”

Sixty percent agree “it’s harder for younger gay men to take advice from older gay men because the world is so different today.” Perhaps not if your next book club includes Christopher Isherwood.

'Keep Your Wives Away From Them' ed. by Miryam Kabakov
‘Queer in the Choir Room: Essays on Gender and Sexuality in Glee’ Edited by Michelle Parke
'Nasty Women: Feminism, Resistance, and Revolution in Trump’s America' Edited by Samhita Mukhopadhya...