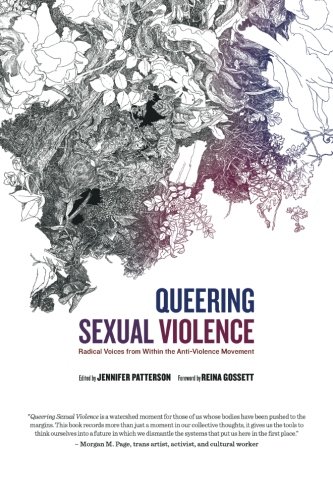 “Outrage is the opposite of victimization,” writes Keiko Lane, “and when queers are outraged, we do something.” Lane is one of 37 queer voices “doing something” about their outrage in Queering Sexual Violence: Radical Voices from Within the Anti-Sexual Violence Movement, a new anthology edited by Brooklyn-based activist and writer Jennifer Patterson.

Nearly six years in the making, Queering Sexual Violence is something of a collectively written open letter to what Patterson refers to as “the non-profit industrial complex,” which has consistently overlooked and undervalued the experiences and insights of queer survivors of sexual violence and trauma. Patterson is rather unambiguous about her objectives for QSV: to challenge reductive narratives that package sexual violence solely as violence against women, thus reinforcing and perpetuating “lessons about who experiences [sexual assault], who perpetrates it and who can heal from it.”

It should be said that Queering Sexual Violence isn’t necessarily the type of book that one expects to enjoy in a literary sense. Fundamentally, this is a collection of diverse voices recounting the worst moments of their lives, often in grisly detail. And yet these pieces are never hopeless, but are in some ways rather stunning in their bravery and beauty. A pair of poems from activist and performance artist Angie River, for example, underscores the awe-inspiring and heartbreaking responsibility of parenting a “little gender bender” in a world that still harbors considerable hostility towards non-binary gender performance. Similarly, Keiko Lane reminds us of the power of being understood in a breathtaking recounting of a brief and powerful connection between two women whose trauma is forever etched into their flesh. In a dense collection that includes quite a bit of upfront and unflinching descriptions of brutality, these moments were a surprising and welcome exploration of the honesty and resilience gained through a life of otherness.

These pieces of literary beauty provide a good counterweight for the harsh yet insightful essays from anti-sexual violence activists like Reina Gossett and Darnell Moore. Moore’s piece, in particular, highlights the complex ways in which trauma is compounded for queer people, who are frequently subjected to direct and indirect homophobia in heteronormative social spheres. Whether or not one has personal experience with violence, Moore’s words–and those of many other contributors–will likely resonate deeply with queer readers. “I became my own offender,” he writes, “metaphorically preying on myself.” For a group that has historically internalized abuse and harassment as a consequence of their behavior or identity, isolated incidents of violence can become inextricably bound up in complex feelings about their outsider status and self-worth. This is evident in the numerous contributors to QSV who struggle to see their own victimization as just that, and the many who felt undeserving of help or unwelcome in hetero-oriented healing spaces.

Throughout these pages, myths about who is and isn’t a victim, or what does and doesn’t qualify as sexual violence are routinely challenged by queer survivors in various stages of grief and healing. Yet it’s Patterson’s own contribution, “These Bones,” that stands out among the other narratives. In addition to being one of the most stunning writers of creative non-fiction I’ve encountered in recent years, Patterson’s voice speaks of the truly complex toll that violence and trauma can take. Moreover, while each contributor to the collection offers valuable insight, it is Patterson who makes the strongest case for her thesis that the unique nature of queer experiences with violence requires a better-developed and more nuanced approach to treatment and support. While some might consider her perspective “radical” or “disruptive,” it’s not one that the editor has arrived at hastily. Having played the role of victim, perpetrator, witness, and activist, Patterson has drawn a conclusion that is not only radical, but also compassionate, well-informed, and beautifully articulated.

Despite its many outstanding aspects, there are moments in which the collection stumbles. The inclusion of such a large group of contributors doesn’t exactly lend itself to consistency and the transitions from one essay to the next can at times feel jarring. Further, the diverse and often conflicting perspectives from the authors detract from a cohesive message. However, I can’t help but feel as though that’s Patterson’s point. Few things are messier or more complex than physical and emotional trauma and one isn’t likely to ever find universality in the narratives. And that’s the real value of Queering Sexual Violence; in a culture that routinely silences voices that might make others uncomfortable, Patterson has chosen to gather them together and give each survivor equal space, regardless of what they have to say. For that reason it’s hard to see Queering Sexual Violence as anything other than an unqualified success with immeasurable value.

William Norwich: On Fashion Week and the "Tyranny of the Red Carpet"
The Smiths' Graphic Novel, 'The Boys in the Band' Read Poetry, and More LGBTQ News
‘Opacity and the Closet: Queer Tactics in Foucault, Barthes, and Warhol’ By Nicholas De Villiers

I am a freelance writer and researcher from Boston, MA. A historian by training, my areas of interest are LGBT history, gender variations, and the role of race and class in the construction and representations of identity.