‘Our Young Man’ by Edmund White

‘Our Young Man’ by Edmund White 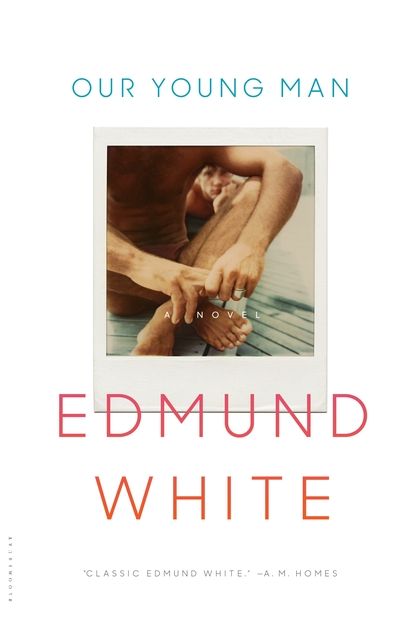 Edmund White’s work has long been interested in the allure of facades. In The Married Man, he showcased what grand heights a love affair can reach when rooted in illusion and misdirection. Likewise, his memoir City Boy: My Life in New York in the 1960’s and 70’s enchants the reader with a selective recollection of mid-century glamour, both of the down-at-the-heels and champagne varieties. Set predominantly in the 1980’s and ‘90’s against the backdrop of AIDS, his latest novel, Our Young Man, interrogates the crucible of vanity prevalent in modern gay life. The novel follows Guy, a model who never seems to age. His endless beauty is a kind of curse for, unlike that more famous ageless beauty, Oscar Wilde’s Dorian Gray, there is nothing supernatural going on here. Guy’s looks are not without their slavish upkeep:

He thought he was like an expensive racehorse whom all the people around him kept inspecting and trotting not for his well-being but to protect their investment. Feel his withers […] is he off his feed? […] the grandstand seems to spook him, he needs blinders […] his nose is warm. If he went out without sunglasses, Pierre-Georges[, his agent,] came running after him to warn him against squint lines. If he gained an ounce, Pierre-Georges would pinch his waist and murmur, “Miss Piggy.” If he wore tight jeans, Pierre-Georges would hiss, “you look like a whore,” and make him change to something looser. Once, when he wore a filmy, sheer robe, Pierre-Georges whispered that most dismissive of French phrases, “Trés original.” If he concentrated while doing a crossword, Pierre-George warned him he was getting elevenses—those vertical worry lines above his nose.

Still, his looks make him a wealthy man, both by dint of his profession in an era that venerated the supermodel and by attracting a string of well-heeled suitors who seem to want nothing more than to lavish their riches upon a great beauty. For Guy, the principal advantage of his beauty is that it allows him to  escape “[the] big, dead, dreary industrial city in the heart of France” where he was raised. Modelling permits him to build a fashionable life for himself first in Paris then in New York while the relative anonymity of print and runway work means he can ply his trade for as long as his beauty lasts, even as the calendar increasingly shows the improbability of his continued career. “He had suffered . . . in his twenties from insecurities (how long could this career of his go on?), and in his thirties from disillusionment (how long must this career of his go on?).” Guy’s existential angst hints at a subtle critique of the schizophrenic nature of vanity. As the novel progresses that critique resolves into an urgent cost-benefit analysis.

Our Young Man is obsessed with manufacturing and maintaining illusions. Guy’s beauty has already made him wealthy and his various liaisons have netted him a Mercedes, a West Village townhouse, and a summer home in the Fire Island Pines, yet as his beauty fades, he goes to great lengths to extend “his shelf life”—he forgoes the tofu in his miso soup and lives “on a diet of espressos and cocaine” to satisfy the heroin chic looks his clients migrate to in the mid-’90’s. Given his success, such vanity can hardly be explained away as merely the burden of a racehorse making good for investors. A charitable interpretation may attribute Guy’s devotion to beauty as the particular flavor that workaholism might take in modeling’s upper echelons; and while it’s true Guy enjoys his profession, even to the point of disdaining newcomers that fail to meet his lofty standards, he hardly comes across as a man devoted to his craft simply out of love for the work. His desire for beauty is an ends unto itself and beauty imprisons Guy as it liberates him. As he ages and it becomes more laborious maintaining the illusion of youth, Guy’s vanity exacts an ever higher price.

Guy is not a model who looks great for his age, he is a counterfeit youth. At one point, he tells his new lover that he’s twenty-five when he’s nearly forty. He’s hardly the only one passing himself off as something he’s not. In fact, Guy seems to associate almost exclusively with counterfeiters. Fred, one of Guy’s patrons, comes out late in life and dedicates himself to being an “A-list gay.” He dyes his plugged hair, gets a tummy tuck and a facelift. He finally achieves his goal when AIDS blinds him and he allows himself to believe Guy’s bald faced flatteries. Guy’s first lover, Andrés, an impecunious art student, resorts to forging Salvador Dalí painting to keep up with Guy’s monied lifestyle. When finally caught wetting his bristle, as it were, Andrés downplays the transgression by stridently claiming, “‘I only worked on lithos of [Dalí’s] best work.’” Guy hardly needs convincing. “A copy of a fake by a fraud was surely a negligible sort of offense” as far as he’s concerned, hardly a surprising stance for one shaving fifteen years off his age. Andrés is convicted and sent to jail. With his lover behind bars, Guy’s desire quickly descends upon Kevin, the gay half of a pair of 19-year-old Midwestern twins “with lips like Froot Loops and . . . teeth like Chiclets.” Kevin is a virgin (“Except [for] fooling around with [his] brother those two times.”) when Guy meets him, but Guy is quick to mentor the teen. By the logic of the novel, Kevin’s “small dick and youth” makes him a natural bottom, but Guy allows him to top as a way of “build[ing] up his confidence.” In this way, Guy and Kevin conspire to counterfeit the natural order of the coupling.

Kevin is an interesting counterbalance to the novel’s obsession with vanity, however. “He [is] enough of a good Midwestern Lutheran to despise worldliness, especially in its most restless, nagging form: vanity.” But that doesn’t mean he is immune to the sway of vanity. While he would rather “be focused on serious, ultimate philosophical questions,” Kevin struggles with the siren song of youth and beauty and his limited window of opportunity to fully leverage the two for pleasure and personal gain. We see this most directly in his relationship with Guy. Kevin has long desired Guy, and his beauty has afforded him access to his love/lust object. As much as Kevin may look down upon Guy’s “frippery,” talking with him makes Kevin feel “more alert, more refined, more alive intellectually.” That refinement is itself an embodiment of Guy’s vanity. Elsewhere in the novel, Guy admits as much, chalking up his cosmopolitanism to a series of social tricks picked up over the course of his long career—in short, another illusion. Kevin can justify vanity if it means he can have Guy, but the spectre of Andrés’ looming release from prison threatens the relationships longevity. Guy feels a sense of duty to the man who spent seven years in prison as collateral damage for his successful career. When Andrés discovers Guy and Kevin in bed together, he begins to question the sagacity of his sacrifice. (It’s not the only time White allows the fallout of his characters’ decisions to haunt the page.) The novel’s conclusion hangs on who Guy will ultimately choose: the counterfeit top with the “million-dollar ass” or the convicted forger made “strong and muscular” in prison. Viewed from the perspective of vanity, the choice is more a question of degrees than absolutes.

The world of Our Young Man will doubtless feel familiar to longtime readers and draw comparisons to the author’s best known works. Yet it would be a mistake to dismiss this novel as simply a rehash of old themes. With sumptuous prose and continental style, White shows that he’s capable of returning to an old well and finding something new to plumb. Guy’s resilient youth may be singular, but his ambivalent subjugation to vanity holds universal sway. Beauty confers great pleasure. So, too, does it extract a hefty cost.