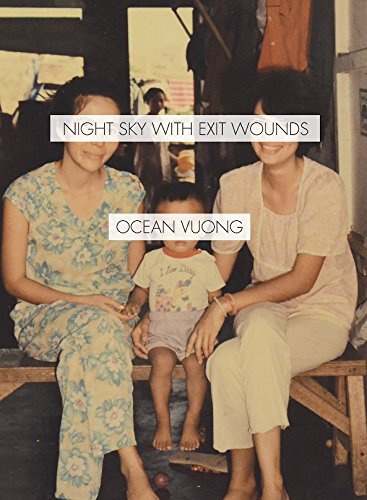 When I first opened Night Sky With Exit Wounds I was worried the book wouldn’t measure up to its hype. I wanted to be floored from the first poem to the last, no room for blunders. I thought the opening poem, “Threshold,” was too broad and vague for an entry way into the book. I liked the verbs and the motion and the panic in the second poem “Telemachus” more. My friend Derrick Austin was sitting across from me. I asked Derrick to read the first two poems for me. Derrick said “The opening poem is welcoming the reader into the book, it is an introduction, a greeting. It doesn’t need to be the greatest hit in the collection.” I re-read the poems. Derrick was right. The opening poem was subtle, as the closing poem is subtle. Ocean Vuong was easing my way into, and directing my way out of, one of the most honest and brave poetry collections I’ve ever read. Night Sky With Exit Wounds is a book of great patience and intelligence and is worthy of the reader’s trust. Here is the opening to “Telemachus”:

Like any good son, I pull my father out
of the water, drag him by his hair

through white sand, his knuckles carving a trail
the waves rush in to erase. Because the city

beyond the shore is no longer
where we left it. Because the bombed

cathedral is now a cathedral
of trees…

Continuing through the book, I began to take notice of the form, word choice, themes in each poem. I began to anticipate surprise. There are so many turns in this book; surprise is one of the only things that can be anticipated. One of the first big jolts that I encountered from Night Sky With Exit Wounds (formally) was the poem “Immigrant Haibun.” Here, the poet extends his lines across the page and writes in big prose blocks. It was not a form that I first expected. But then I remembered the prose blocks that Ocean wrote in his chapbook No. I also remembered that he is currently working on a novel. Here is an excerpt of Ocean playing with prose in “Immigrant Haibun”: “Then, as if breathing, the sea swelled beneath us. If you must know anything,/know that the hardest task is to live only once. That a woman on a sinking//ship becomes a life raft— no matter how soft her skin…”

As a poet, Ocean shifts into prose and out of prose. He writes in couplets, he writes chiasmus, and then he creates his own forms. The form of the poems are so constantly and originally inventive. Ocean even created his own rules for the section breaks in this book too (you’ll see it when you buy the book). In the lines above, and throughout the book, is such intelligence and versatility. I want to talk about the intelligence of the poem a bit, before continuing on to talk about the form. Ocean has so many small truths and observations that he shares with the reader. His life lessons are slipped gently aside an image in the poems. The truths that Ocean reveals throughout the book do not feel absolute and all-knowing though. The truths that Ocean gifts to the reader feel genuine, self-questioning, and open to mutual discovery. Not more than ten pages away from this poem is one of my favorite poems in this collection, “The Gift.” I believe that this poem is a prime example of the complex interaction between the form and the emotion(al intelligence) that Ocean is able to maneuver. In this poem, the narrator is at a nail salon, teaching a mother how to write in English. I love the juxtaposition between the narrator’s grasp of the English language and the mother’s grasp of the English language; the tenderness and the pain between them in this poem. Here is an excerpt from “The Gift”:

Even now the nail salon

will not leave her; isopropyl acetate,
ethyl acetate, chloride, sodium lauryl
sulfate & sweat fuming
through her pink
I ♥ NY T-shirt.

The b bursting its belly
as dark dust blows
through a blue-lined sky.

Is it time to talk about language yet? The contrast between the formal, colloquial, and high lyric here in “The Gift” is only one example of how Ocean plays with language in the book—alliteration, assonance, slight rhyme. Ocean has a range of poetic techniques that he is able to deploy to heighten the music of his poems.  Another example is the tonal shifts from serious to playful. Another example of language usage in the poems is the code switching from English to Vietnamese. I’ll leave you with this heart-wrenching example of code switching from Vietnamese into English from the poem “Notebook Fragments”:

Or was it American for “bomb?”

Woke up screaming with no sound. The room filling with a bluish water
_________called dawn. Went to kiss grandma on the forehead

Now, I want to talk about themes. It seems like a natural transition after talking about form and language. I took note of the themes that were reoccurring in Ocean’s work. The overarching themes include war in Vietnam, migration to the United States, grappling with definitions of what it means to be American, familial violence and the incarceration of a father, queerness and sex and the loss of a friend, hope. I also took note of the reoccurring words that Ocean uses in his work and some of them are moon, sun, mouth, lips, teeth, body, time, snow, father, mother, fire, burn, black, bright, dreaming, screams, kneeling, kissing, hair. At times, I did feel a bit under stimulated by these repeating words. I would think to myself “please, not another poem with teeth.” But ultimately, I think, this sort of obsession is what creates the poet, what allows the reader to understand the culture and viewpoint of the poet. Ultimately, I was able to appreciate the words that Ocean repeats because every instance where the word is repeated it gains new meaning. If anything, this is the goal of any poet— to take the familiar and inscribe it with new meaning. For example, here are some instances where Ocean mentions and rebirths his relationship to the word hair.

From “A Little Closer to The Edge”: “…His faux Rolex, weeks// from shattering against her cheek, now dims/ like a miniature moon behind her hair.”

From “In Newport I Watch My Father Lay His Cheek to a Beached Dolphin’s Wet Back”: “His hair the shade / of its cracked flesh.”

From “Homewrecker”: “… your fingers//through my hair— my hair a wildfire…”

From “Because It’s Summer”: “… he’s waiting with sticky palms & mint / on his breath a cheap haircut / & his sister’s levis…”

From “Into the Breach”: “Little black hairs //like the legs/of vanished insects.”

I’m not sure if it’s possible to write a perfect poetry collection but, here in Night Sky With Exit Wounds, Ocean Vuong has come pretty damn close. His voice is so attentive to poem, attentive to the reader. In my notes on the book, I have written “I want a tonal shift” and the following poem would have that tonal shift. I would write “I want a section break now” and the following page would be a section break. I would write “This would be a good place for a long poem” and the poem would extend into two or three or four pages. Ocean Vuong was so in tune with how the reader would interact with the poems and the book. I felt like he (as the poet) was guiding me by hand through a hurricane and he refused to let go of my hand, until the book completed. I’ll say it again, Night Sky With Exit Wounds is a deeply personal, risky, and utterly gripping endeavor. Ocean Vuong is a formally inventive, thematically brave, emotionally intelligent poet, so worthy of the reader’s trust. There are few poets alive who can morph image and language and tone in the manner that Ocean Vuong did with this debut collection. Bravo! A must read! Night Sky With Exit Wounds belongs in your library!