‘My Year Zero’ by Rachel Gold

‘My Year Zero’ by Rachel Gold 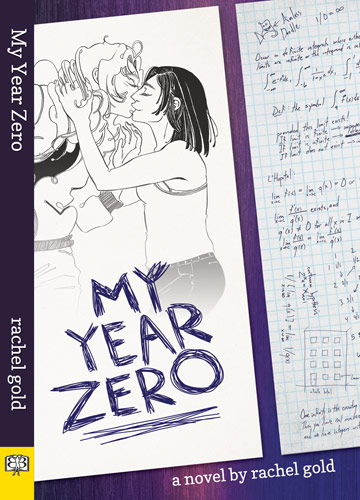 When Lauren meets Sierra, it’s in the midst of a crisis at the high school Lauren attends. Lauren is a junior and has recently decided she needs to enhance her life by finding a girlfriend and losing her virginity. Visiting college student, Sierra, seems quirky and sophisticated—and Lauren’s immediate attraction puts Sierra in the running to participate in her plan.

As My Year Zero unfolds we learn that Lauren lives with her divorced father, a successful lawyer with high expectations she doesn’t seem to be able to fulfill. Lauren’s father, a man who only appreciates logic and pretentiousness, doesn’t understand a daughter who is creative, sensitive, and honest. The man is cold and calculating and uses Lauren as his personal maid and landscaper to keep up appearances in a huge lake house in Duluth he seldom inhabits. His relationship with Lauren is testy and demanding, contributing to Lauren’s feelings of inadequacy and causing her to question her worth, her sanity, and, at times, her life. He, for his part, is detached and seems blind to Lauren’s emotional needs. The only thing going for the relationship between father and daughter is that he has supplied her with a decent car and, after she agrees to his conditions, he allows her to visit Sierra in the Twin Cities during a school break.

In “The Cities,” the two young women embark on a relationship that quickly becomes filled with turmoil and confusion. In the midst of her fledgling chaotic relationship with Sierra, Lauren becomes part of a writing group populated by Sierra’s circle of friends, where she meets Blake. Lauren is intrigued by Blake as she takes on writing the character of Zeno and interacts with Blake’s character, Cypher, in the online story. Zeno perfectly reflects Lauren’s fractured, faltering, and turbulent interior life, and the story gives Lauren a chance to explore feelings she has difficulty with in real life.

The subplot of the online story enhances the characters’ personalities as it progresses and it gives insight into motives and temperaments. Sierra is the Queen of Roques, an all-powerful ruler who controls others. Zeno’s character gives us a better understanding into the fragmented feelings Lauren experiences as she navigates a path into adulthood and struggles to make sense of her life.

As things become more and more difficult between Lauren and Sierra, Lauren realizes that Blake has a calming effect on her, allowing her to talk freely and openly about her feelings, something she is not allowed to do around her father or Sierra. If she did, her father would find her more imperfect than he already does, and Sierra doesn’t seem interested in anything but sex and being the center of attention.

Minor characters are well portrayed without hijacking the story. Lauren’s mother is supportive, but mostly absent from her life. Her brother Isaac is much like his father, but with a touch more humanity. Sierra’s roommate, Cyd, although diplomatic enough to hold her tongue for a while, in the end shows herself to be insightful and the concerned voice of reason.

The main characters are well drawn. Lauren is an irascible character, as yet unable to recognize her own strengths. Sierra is more like Lauren’s father than either of them could imagine. Blake is a flawed character who has more wholeness than she understands. Their interactions increase Lauren’s awareness and move her forward in her difficult journey.

Gold has skillfully written a story with timely topics for navigating the slippery approach to adulthood, ranging from sex and sexuality, relationships, self-discovery, overcoming difficulties with authority figures, parental bullying and neglect, and bipolar disorder. Resources on safe sex, bipolar disorder, and emotional neglect are included at the end of the book, encouraging additional exploration on these important topics.

My Year Zero is classified as “new adult fiction,” and will appeal to both young and more experienced adults, meeting difficult topics head-on with a compelling story (and a masterful story-within-a-story) written to both inform and entertain.