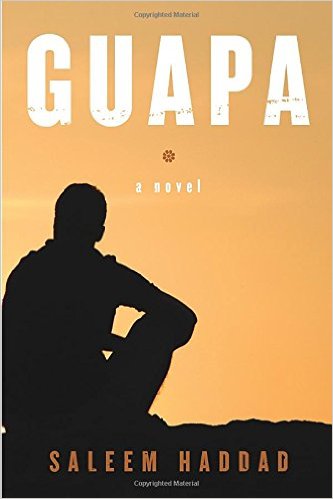 Guapa by Saleem Haddad is the story of Rasa, a gay Muslim man. Told in real time during the span of a day, the book uses memory to tell Rasa’s story. The narrative offers insight into his childhood, American education, return home, career as a translator, and relationship with his secret lover, Taymor. The bulk of the novel takes place the morning after he is caught in bed with Taymor.

The people in Rasa’s life are varied and vibrant, and the dialogue in this novel is alternately clever and cleaving as Rasa navigates life in America. Smart, practical Basma and Baj, a flamboyant drag queen, offer Rasa advice on his job, love, and family situations at Guapa, the gay bar they frequent. Rasa lives with Teta, his conservative grandmother, and Doris, their maid. He pines for Taymor, who loves him back but cannot overcome his internalized homophobia. Rasa works as a translator for Laura who, despite her good intentions, lacks perspective on the struggles that plague Rasa’s homeland. He remembers with complicated feelings Cecile and Sufyan, classmates with whom he had complicated relationships.

The reader can feel Rasa’s social anxiety about his otherness at his American university: He wants to be open about his gay identity, but longs for the safety of invisibility in a country that has become violently Islamophobic. He wants to love and be loved by someone who is proud to be with him, but instead he finds Taymor, who is so deeply closeted that he eventually marries a woman. While the relationship between Rasa and Taymor (or even between Rasa and Teta) should be the most important one in the book, the poignant friendship between Raj and Rasa wins out instead. Rasa protects Raj, who is an easy target because of his femininity and his beauty; in return, Raj offers Rasa a place to be honest about his sexuality.

In the end, friendship is what matters the most here. Rasa spends most of the book pining for love, aching for a man who is unable to reciprocate, and wondering where his mother has gone. It’s not the love story we’re trained to expect, but it’s the one that we most often live: we look for our happily ever after in the arms of a lover, ignoring the people who have been there all along. Guapa challenges the notion of what a “conventional” love story should look like, and as one of few queer novels with an Arab protagonist, it must not be overlooked. Haddad has woven together a fascinating story with elements of a life richly lived, and if Guapa finds its way into the canon of queer literature, we will all be stronger for it.

'Amor and More: Love Everafter’ edited by Radclyffe & Stacia Seaman
MB Caschetta: On Her New Novel 'Miracle Girls,' Being an Early Member of ACT UP, and Writing as Rede...
These Fevered Days Vividly Recreates the Texture of Emily Dickinson’s World