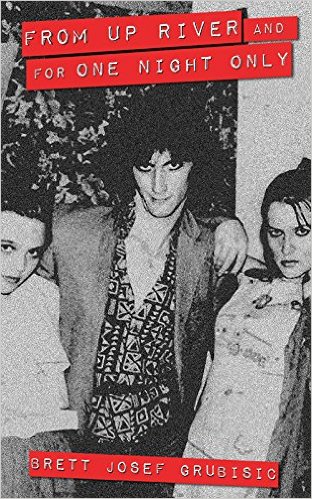 To call novelist Grubisic’s latest work “your typical coming-of-age Rock’N’Roll story” would be selling it short. As readers, we are used to seeing recurring tropes in new adult texts: first love, a rule-breaking adventure, domestic upheaval, or existential crisis. However, they’re often written in comprehensible, syntactically coherent sentences, and plot driven texts. We nod and smile at the moments we recognize and frown at those we’ve pushed far into the depth of our memories. From Up River and for One Night Only is a linguistic brouhaha, lending itself to non-associative devices. These tropes are no longer intelligible; rather, they are bendable ideas that Grubisic populates with fragments, jarring syntax, unorthodox word association and with a myriad of different types of writing styles.

Dee, Gordyn, Em, and Jay are edgy high school students with a passion for music that only the creation of a band can satiate. Living in River Bend City these four teenagers are eager to get away–or at least to know what it feels like to have the option of leaving with prospects. College does not seem on the forefront of their mind, though exploring their sexuality is crucial and getting educated is paramount. They’d like their music to make an impact, to strike a chord in its auditors. Of course, the text doesn’t spell it out for us, in that it jumps back and forth from year to year (an effective destabilizing gesture). The author is headstrong about letting the words function autonomously on the page so as to mimic the hidden intentions of his characters within the reader.

At first, a traditional reader might find the text stressful, annoying, and even perhaps infuriating. There is hardly any entry point for a reader to get immersed in a plot. Rather, the reader must dive right into language (“The / Gor / gons”) in order to understand. In that sense, the book is rather participatory. We want to know what the characters are planning and what they mean, but we will have to do the work to grasp the extent of it in practice. The text is not quick in identifying its protagonists’ arc and spends more time creating a context for the characters to inhabit: “Behind their perch: a pair of scratched yellow backhoes with scoops half-raised, burdened with loads of gravel, and still as if frozen in mid-battle – a little visual gag from workmen who’d left for the weekend.” These contextualizing gestures remind us of landscape poets who are obsessed with the described landscape as a psychological space. In fact, readers are systematically reminded of where the action takes place, but are not given many clues as to what the action actually is.

The preparatory steps integral to the band’s trip to New York are effective in their linguistic construction. The readers witness the band spell out sounds, consider word choice, rhythm, and general sentence construction. The characters become their own first interpreters:

The basement’s scant lighting [….] encouraged them toward the gradual pleasure of
unselfconscious abandon [….] Letting loose surprised them [….] ’That was orgasmic. Again? Se says ‘disorientated,’ that’s not even a word [….] Should we change it?’

Though at times indecipherable, Grubisic’s novel is an exciting exercise in language, and it does give its readers enough to hold onto, should they be ready for the ride. The story’s climax is a fantastic marriage of music and poetic prose, culminating in a final performance that leaves its readers, characters, and linguistic audience wanting more disjunction, confusion, and grunge.

Vita & Virginia: "A Longing Far Beyond The Sexual"
'Luminous Debris: New & Selected Legerdemain 1992-2017' by Timothy Liu
'Give It To Me' by Ana Castillo