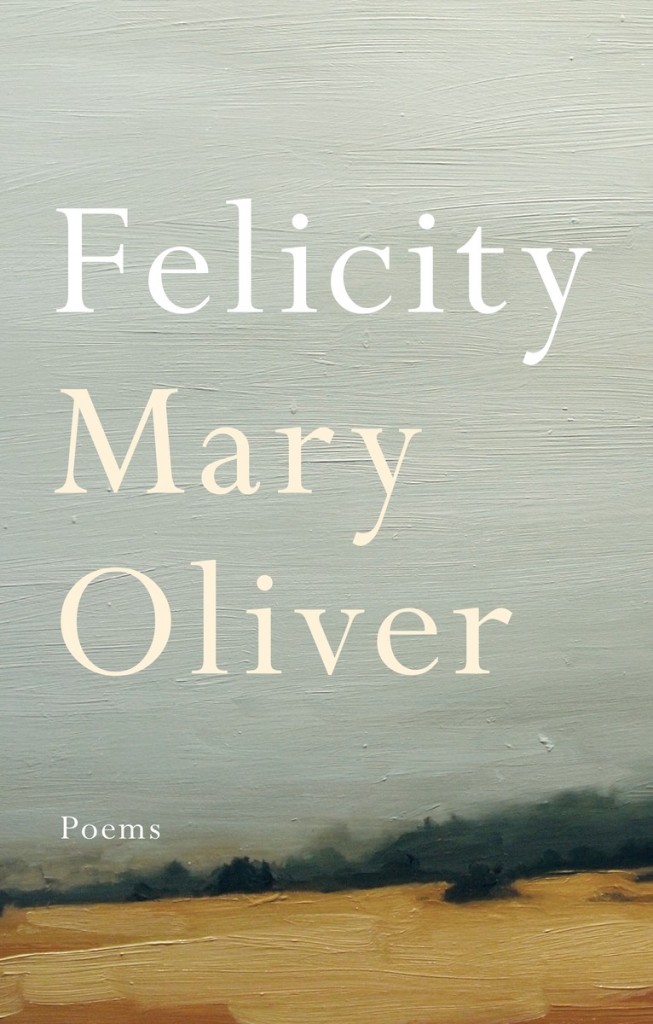 Over her past few collections, Mary Oliver has moved away from the sweeping depictions of nature and fascination with religion that permeated her early and mid-career books. In her most recent work published by Penguin Press, she has focused on short poems about over-coming depression, rediscovering love, and celebrating joy as well as gratitude. In Felicity (2015), she brings that work (and her many books that precede it) full-circle.

The poet begins Felicity with a retrospective in the collection’s first section, titled “The Journey.” However, these are not recycled poems from previous books, but rather a series of meditations that attempt to put Oliver’s body of work into context. In the opening poem, “Don’t Worry,” she writes, “Things take the time they take. Don’t / worry. / How many roads did St Augustine follow / before he became St. Augustine?” Those four lines are the entire poem, and they represent the kind of work on display in this movement of the book, which is distilled into a direct and declarative style not all that different from haiku.

Many of the poems in the “The Journey” explore letting go and acceptance, which is not surprising given that Oliver turned 80 shortly before this collection’s publication. The two best poems from this section include “I Am Pleased to Tell You,” in which the poet writes “Mr. Death, I am pleased to tell you, there / are rifts in your long black coat,” exploring a fantasy that Rumi visits her through his poetry. The poem is charming because it disarms the specter of death. “Storage” is the other exceptional piece, and it marks a departure from the more conceptual and didactic poems in the opening section, because it focuses on the familiar physical space of a storage unit:

When I moved from one house to another
there were many things I had no room
for. What does one do? I rented a storage
space. And filled it. Years passed.
Occasionally I went there and looked in,
but nothing happened, not a single
twinge of the heart.
As I grew older the things I cared
about grew fewer, but were more
important. So one day I undid the lock
and called the trash man. He took
everything.
I felt like the donkey when
his burden is finally lifted. Things!
Burn them, burn them! Make a beautiful
fire! More room in your heart for love,
for the trees! For the birds who own
nothing—the reason they can fly.

Some of the poems in the book explore acceptance and letting go through imagery (such  as feeling free from the fear of death by reading Rumi’s poetry, or living in the moment as the flowers do in “Roses”), but “Storage” focuses on throwing items away, and it is a satisfying poem because it grounds itself with tangible objects. If readers have a grievance with the first section of the book, it will be that not enough of its poems dwell in the physical world like “Storage.”

While “The Journey” section only briefly touches on the corporeal world, the second section, “Love,” revels in reality, especially the delight of romance. Oliver has rarely explored love between people, but in Felicity she jumps into the topic with zeal. In fact, her poems have never sounded so youthful. In “I Did Think, Let’s Go About This Slowly” she slyly negates her title by saying “But, bless us, we didn’t.” Several of the poems praise kissing, like “I Know Someone” and “This and That.” Many of the poems from this section resemble “How Do I Love You?” which is playfully erotic:

How do I love you?
Oh, this way and that way.
Oh, happily. Perhaps
I may elaborate by

Oliver’s work has never been so sexy and mischievous. Of course none of the poems are explicit, but they take inspiration from Rumi; though they are brief, they overflow with sensuality and merriment. If her past work centered on finding spirituality in the woods, Felicity is about putting her past to rest and taking pleasure in the moment, especially in the elation of loving someone.

Given the escalating celebratory tone, it comes as no surprise that the final section of the book is the title section. It curiously has only one short poem, “A Voice From I Don’t Know Where.” This poem ends with the lines, “It must surely, then, be very happy down there / in your heart. / ‘Yes,’ I said. ‘It is.’” This closing line appropriately encapsulates Oliver’s concise and ecstatic style. In fact, it’s refreshing to see such joyful poetry in our post-modern age. Readers looking for a hopeful and romantic book will find Felicity a gem.

Isaiah Vianese's poems have appeared in Assaracus, Ballard Street Poetry Journal, Blue Collar Review, The Fourth River, and Moon City Review. He lives in New York, where he teaches writing, and blogs about poetry and music at ivianesefromyes.blogspot.com.