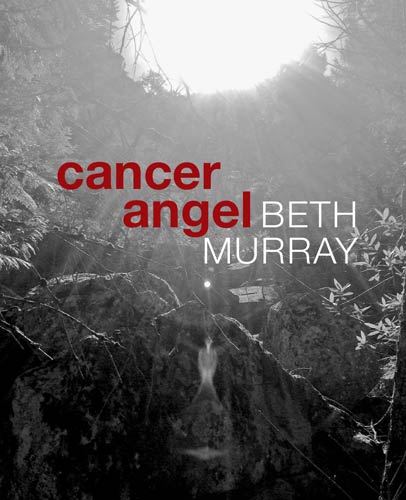 When Walt Whitman writes of the body, “That of the male is perfect, and that of the female is perfect,” he inaugurates a specific American equality and acceptance of our individual amalgams of flesh, blood, bone, tissue, soul. When Beth Murray writes, in Cancer Angel (Belladonna), her final poetry collection, which was published posthumously, “the tumors are speaking a voice,” Whitman’s electric acceptance is challenged and ultimately enriched.

Murray’s is poetry that makes the body holy, that illuminates the dark. Diagnosed with advanced breast cancer when she was in her forties, Murray didn’t “struggle with it”-–a phrase often used to frame cancer patients’ experience of the disease. This sharp poet sidesteps, well, more like leaps over sentimentality or cliché. The images can be searing. In “scar,” for instance, the defacement speaks for itself, literally and brazenly: “scar across my chest says have done battle// scar across my chest says have been cut.”

Poetry is a conversation between the poet, her body, and the world, here. As a natural healer and certified homeopath, Murray was prepared to dialog with her scars, her tumors, the cancer. She commented, in a 2013 interview with Kristen Hanlon in The Alamedan, that a listening phase preceded these poems. It was a time of “crafting a path for both healing and working with all the fear that comes up as a result of cancer.”

The meditative pace is evinced in disarmingly casual, substantively packed lines. The double-space between each line, which in some collections can seem arbitrary, offers a cushion of necessary distance. From that space comes a teaching, or a suggestion of a way, as when, speaking to herself, her cancer, you the reader, Murray’s calm directive is laid out: “don’t wonder what the way, but wait to receive it” (“smoke”). That caution is not New Age distraction, but a preface to a fearsome dispatch:

sit as the herd thunders toward you

feel the earth rumbling underneath

let rise through my veins the old disappointments

Rush, yes rush! In three words the poet pleads for an end to the agony of tubes and fluids. “herd,” a poem descriptive of her grueling treatment, is a joy to read. (Granting a reader joy in a collection whose theme is cancer says tons and more tons about the poet’s soul–lovely, yes, and indomitable.) The herd is, variously, a mob of doctors loyal to American Medical Association guidelines, unaware the officious body views them as a herd; and the multitude of patients treated as if they were a herd; and all their tumors, also. What a smooth, speedy, urgent mix of imagination and med-speak: “a herd all needs the same thing, all tumors of a certain type, same mind//group mobilizes as one, all caribou running in the same direction, all estrogen//receptor positive cells surge in the same direction away from the red vile liquid.”

The patient/poet is not given a choice. “big father medicine” insists “you must” [get the treatment] and “wanted to hug me at the end of every visit / big father medicine enveloping, ‘everything will be ok.’” Sarcasm is an indispensable tool in a poetry which observes this country’s medical systems. Murray makes good use of it. The nurses are screwed: “she will be paid a few dollars to sit slowly pushing down” [on a needle into Murray’s arm for half an hour each session]. The doctor “[…] will be paid $15,000 for signing the vile red liquid order.”

With disease comes a sense of the body as a baffling, traitorous, exoskeleton no longer a part of the “me” which is all thought-cloud. Murray’s poems moon-walk between consciousness and flesh. She writes of her attempt to guide the cancer out of her body, by way of her own imaging, and wants to refuse injections so she can do imaging healing, “so I could swim / send cancer into the water with each stroke.” If only.

Murray also published three chapbooks and the book-length poem, The Island (Second Story Books). We are lucky she added another book to her body of work.