‘Ask a Queer Chick: A Guide to Sex, Love, and Life for Girls Who Dig Girls’ by Lindsay King-Miller

‘Ask a Queer Chick: A Guide to Sex, Love, and Life for Girls Who Dig Girls’ by Lindsay King-Miller 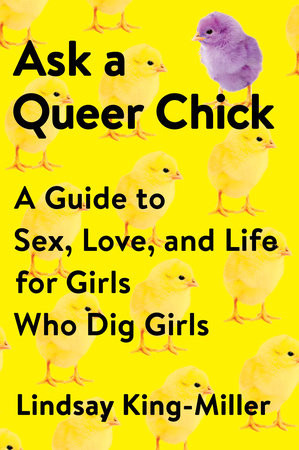 When I was twenty-two, I found a copy of Emily Post’s Etiquette for sale on the street in Berkeley for twenty-five cents. Without understanding the cultural paragon of the book, I purchased it merely because it seemed a throwback to a bygone era, where people utilized different sealing wax depending on who they were sending letters to, had actual rituals for funerals, and knew what were the best days for calling on friends, depending on the closeness or estrangement of the relationship.

It occurred to me, for years after finally reading the book, that etiquette is not, in fact, an extinct species belonging to an extinct class; rather, society as we knew it had changed, and therefore, the way we as citizens of a particular demographic interacted with one another had changed. It seemed to me that we were all—in a world where women had joined the workforce, domestic “order” as presented pre-Baby Boomer generation was disrupted, and the middle class began to be a nostalgic idea of the past—grappling with ritual we’d been taught by our elders in the sociocontextual demographics of the modern world.

Etiquette, even existing in some fragmented form as it does currently, is a complicated topic to broach, largely because it takes on characteristics that are specific to the class, culture, and positionality of an individual. So when I picked up Lindsay King-Miller’s Ask a Queer Chick: A Guide to Sex, Love, and Life for Girls Who Dig Girls, I was pleased to find that it wasn’t, as I expected, a queer version of Emily Post’s book, but rather a collection of essays that sought to explore what queer citizenship looked like. The essays within take a gentle, yet critical, approach to some of the major questions (of all sorts: cultural, political, pertaining to anatomy, etc) that come up within the queer community. Her chapters not only tackle mainstream topics such as Uhauling and Pride, but also allyship for straight folks, discrimination in the workplace, sexual scenes and etiquette around courtship, and dating in general.

What I found particularly essential about King-Miller’s book is the approachability she utilizes around topics pertaining to problems within the queer community itself. In one chapter, she deconstructs bi-phobia, discussing not only what it looks like and how it can manifest even within queer circles, but also how to talk about it, both inside and outside of the community. Her conversational vernacular and narrative approach alleviate reader anxiety and provide a literary safe space for the curious of all genders and orientations to educate themselves; she never comes across as sanctimonious or harping, judgmental or soap-boxy. Instead, she takes a gentle approach that assumes the reader is always trying their very best.

In a world struggling with identity and how to behave, with big political questions of belonging/not belonging, Ask a Queer Chick is a gentle and educational guide for all of us.