‘Voyage of the Sable Venus’ by Robin Coste Lewis

‘Voyage of the Sable Venus’ by Robin Coste Lewis 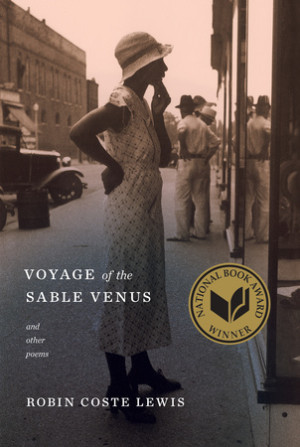 The first time that I picked up Voyage of the Sable Venus by Robin Coste Lewis was shortly after its release, in a New York City bookstore. I flipped through the book’s pages, read a couple poems, and then moved on (walking out of the store empty-handed). The second time that I encountered Voyage of the Sable Venus was the day after Robin Coste Lewis won the National Book Award. I heard her recite poems from the collection with her former teacher, Yusef Komunyakaa, at New York University. Again, I was interested in the poems but not exactly sure what all the hype was about. I say this because I think that it’s important to note. This collection is not something that you can lazily flip through at a bookstore. This collection is not something that can be half listened to at a poetry reading. Voyage of the Sable Venus demands the reader’s full attention.

I do not mean to be rude, in stating that I originally struggled to enter this collection. I mean to say, when you stand at the edge of the ocean it is hard to understand all of the depth and life and mystery that it holds. This book needs to be read in order from the first page to the last page. This book needs the reader to study its form, do research on its content, and then reread the poems again. This book deserves a reader’s slow time. I’m serious. Voyage of a Sable Venus demands the attention from its readers and will not grant entry to anyone who will not respect its enormity. Seldom does one come across a work of art that is so intelligent and expansive that it makes us pause and question and rethink and wait more and reimagine language and history and beauty and the self. Voyage of the Sable Venus is a long journey through thousands of years of art history, meditating of representations of black womanhood. The book sprawls across forms too.

I think of the entry and exit poems in this collection as first person high lyric. Lewis writes, “Because you had never been hungry, I knew // I could tell you the black side / of my family owned slaves. // I realize this is perhaps / the one reason why I love you…” Lewis writes, “To her son, Théodule, Marie Panis gave / her “favorite” slave: a girl named Félicité… But mostly I have wondered: How / does one name a slave Happiness?” The two quotes mentioned above are from the entry and exits into the book. I think of the large middle poem (the title poem) as a conceptual ekphrastic poem, a recollecting and questioning of art history. Though, Robin Coste Lewis calls the title poem a narrative poem.

This claim, that the long title poem, that immense middle poem (which recants thousands of years of art history) is narrative, is a grand claim. This is a questioning of what narrative means. What is the self, or the narrative of the self, in relationship to the histories that an individual’s ancestry has endured? What is blackness, womanhood, and beauty in relation to the histories that have preceded it? How can an individual narrate the self that exists (or wants to exist) outside of these histories? Voyage of the Sable Venus is a wonderful challenge in so many ways, on each line, each concept. Voyage of the Sable Venus challenges notions of beauty, notions of representation, and notions of poetic form. It challenges expectations of what a first book can look like. I keep rereading the poems, seeing Rukeyser, Hayden, thinking about Rickey Laurentiis and Cathy Park Hong. This is a wide range of poets producing very different work. I’m not sure if any of these aforementioned poets are influences. I see so many poets and paintings and libraries and landscapes in this collection. This is not a book that flaunts its knowledge, it’s just impossible to ignore how incredibly deep it is.

I think that it might be best to excerpt some lines now. Maybe we will start by looking at how beauty functions in the collection?

Now let’s look at references to black women in the title poem “Voyage of the Sable Venus” which collects its words from “titles, catalog entries, or exhibit descriptions of Western art objects in which a black female figure is present, dating from 38,000 BCE to the present.”

“Statuette of a Black Slave Girl / Right Half of Body and Head Missing.”

I think that Lewis’s mentions of beauty (positioned with Lewis’s mentions of the black female figure) can also be noted in the title of the book. When first entering the book, I looked up what the title means. I learned that “Sable” means black, I learned that Venus is the goddess of love and beauty. Thus “Voyage of the Sable Venus” is appropriately a journey of black beauty, of love. I also learned that “The Voyage of the Sable Venus from Angola to the West Indies” is a painting of a black woman on a half shell by Thomas Stothard, which serves in contrasts to Botticelli’s “The Birth of Venus” which features a white woman. I began to think about the contrast in the journeys and depictions of these two Venuses. Perhaps, this is what I take from my initial readings of the book, a new understanding of blackness, beauty, art, and form.

Voyage of the Sable Venus is a mind boggling masterpiece of a debut. I admire this book for its complexity, for its strength and tenderness. I admire the curiosity and passion that it takes to accomplish the research necessary to create this book. There is so much life contained in these pages, not just the life of the author, but the life of artworks researched. When holding Voyage of the Sable Venus I feel the weight of the ocean, everything that has crossed its surface and everything that lives beneath.