‘The Straight Line: How the Fringe Science of Ex-Gay Therapy Reoriented Sexuality’ by Tom Waidzunas

‘The Straight Line: How the Fringe Science of Ex-Gay Therapy Reoriented Sexuality’ by Tom Waidzunas 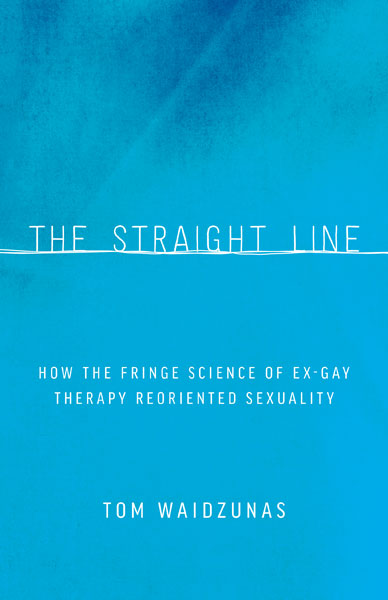 For most gay men and women, the sanctimonious argument is familiar: homosexuality is a sinful, socially harmful learned behavior that, with enough effort and commitment, can be changed. Of course, most in the LGBTQ community would likely agree that they didn’t choose their orientation, nor do they have the power to change it. Or do they?

With all the fervor surrounding the gay marriage debate and other LGBTQ civil rights issues of the last several decades, it’s easy to forget that heterosexuality and homosexuality–constructs used to define sexual practices as old as time–are a relatively new phenomenon whose definitions are as malleable as many other social or cultural constructs.

It is this question of malleable sexual orientations that is at the heart of Tom Waidzunas’ new book The Straight Line, a socio-cultural exploration of the rise and fall of the ex-gay and reorientation therapy movement. Given the recent urging from congress to ban the practice of conversion therapy and the increasingly common rejection of such therapies from the fields of medicine and psychology, The Straight Line could have easily become dated before it was even published. Yet it is perhaps a testament to Waidzunas’ skill as a writer and researcher that, far from rehashing an argument that is all but settled, The Straight Line is a remarkably forward-thinking work of scholarship with the potential to disrupt normative academic discourses in the best possible ways.

Rather than view the subject as either side of a good/bad or valid/invalid dichotomy, Waidzunas considers the ex-gay movement as the counter-image of the various iterations of the gay liberation movements from the late 1950s through to the present. By eschewing concepts of right or wrong, what emerges is a nuanced and incredibly insightful evaluation of the ways in which both movements have influenced and been influenced by areas of American society and culture from religion and politics to psychiatry and scientific research.

Although the equality debate between the LGBTQ community and conservatives has long been considered an issue of morality and or social policy, for decades each side has, according to Waidzunas, “engaged with science and the state” to provide empirical evidence that validates their respective agendas. Throughout the first three quarters of the 20th century, for example, the conservative movement frequently turned to the psychiatric community (which until 1973 considered homosexuality a mental illness) to find a cure for a disorder that they insisted was caused by over-feminization or a fear of the opposite sex. In more recent years, the gay community has doggedly pursued evidence of a “gay gene” that would finally put an end to the nature/nurture debate around the origins of one’s sexual orientation. In each case, both sides are seeking an immutable definition, explanation, or justification for their identity and in doing so have effectively–and ironically–reshaped the ways in which we understand and interpret sexual orientation.

It is questioning the malleable nature of evidence and definitions that is the most exciting and perhaps most controversial aspect of The Straight Line. Is the medical community’s opinion on homosexuality (one that is commonly considered a win for civil rights activists) as valuable as we tend to think it is? After all, it was not so long ago that this same community labeled homosexuality a deviant behavior diagnosable as a mental illness. And if these supposedly immutable facts are indeed subject to change, does that not suggest that our understanding of homosexuality – the behaviors, identity, and overall construct – can in fact be changed or, in Waidzunas’ terms, reoriented?

Despite its fascinating subject and a very thorough history provided by the author, The Straight Line is unlikely to appeal to a broad audience. Like most scholarly books, Waidzunas’ work is narrow in scope and relies heavily on a strong academic framework built on decades of queer theory. Moreover, many readers could find the author’s impressive objectivity disarming, leaving them waiting for a condemnation of reorientation therapy that never quite arrives. Nevertheless, for those willing to commit to the material, Waidzunas offers a brilliant and original perspective that calls into question constructs like gender and orientation that have long been believed to be fixed or contextual. Not only does this disrupt academic discourse and dominant understandings of critical aspects of identity, it also forces a reconsideration of the debate between the LGBTQ community and the conservative right. Ultimately, such reconsiderations have tremendous implications for the future of queer studies and the equality movement in general.

I am a freelance writer and researcher from Boston, MA. A historian by training, my areas of interest are LGBT history, gender variations, and the role of race and class in the construction and representations of identity.