‘Queer: A Reader for Writers’ Edited by Jason Schneiderman

‘Queer: A Reader for Writers’ Edited by Jason Schneiderman 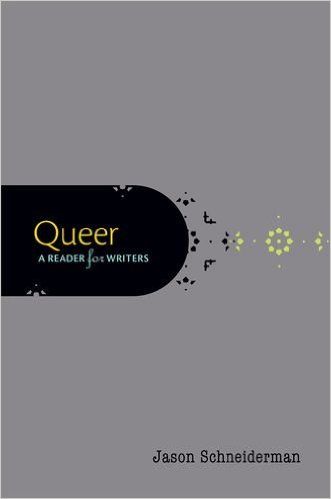 Queer: A Reader for Writers is a part of an imprint of Oxford University Press of single-topic readers geared towards college writing classes which also includes the readers: Gender, Identity and Culture. The idea behind these readers is to introduce students to various academic and cultural concepts and to improve their writing skills through discussing them. Each text is followed by a few questions and at the end of each section there are additional questions which ask students to synthesize information and to explore beyond these texts.

Throughout the reader, editor Jason Schneiderman is present in the informal introductions to these sections and texts. Whether this is part of all the readers in this series or his queering of the genre, these interjections are welcoming and keep the tone conversational while discussing topics that might be new and opaque to the intended audience.

The first section, “Speaking Queerly,” includes two texts: the GLAAD Media Reference Guide from 2010 and a blog post from Mx. Justin Vivian Bond’s website: “Mx. Justin Vivian Bond: A User’s Guide.” Both are texts for instructing the media, a majorly heterosexual and/or cisgender audience, on the most respectful terminology to describe a person (or people). While GLAAD does provide some explanations on why some terminology should be avoided, Mx. Bond goes in depth to explain the personal reasons and meanings behind the words that should be used when referring to vself. The juxtaposition provides the book’s first two lessons. The first is that it is equally as important to know the words as it is to understand the meaning behind them. The second is that, arguably, one of the major tenets of the whole ‘queer project’ is one of self-definition.

In the following section, “Thinking Queerly,” readers are introduced to queer theory texts from Foucault, Sedgwick and other important thinkers. It is here that readers are introduced to the concepts and conceptions that inform how we think about sex, sexuality, and gender today. Arguably, the major hurdle in understanding queerness is the remapping of ideas; moving beyond a binary-based thinking to a spectrum, spherical, or temporal-based mapping for comparisons and connections, and these texts provide an ample introduction.

Queer does not stay too long in the realm of theory and devotes the remainder of its pages to how queerness and LBGTQIA identities exist in the world now, how they have existed in history and/or might exist in the future. This collection gives attention to a breadth of once lesser-known gender, sex and sexual identifications that have gained increasing attention such as non-binary genders, intersex and variations of asexuality and demi-sexuality. It does not limit its scope to American points of view and explores queer lives in Russia, Turkey and Belgium. Also assembled are explorations of queer identities intersecting with race and/or religion, investigations into forms and results of activism and discussions about BDSM, open relationships / marriages, living with HIV, queer family structures and the limits of laws. The variation in the types of texts is also impressive as it includes poetry, comics, manifestos, Supreme Court rulings, theory, opinion pieces and news articles. Throughout 10 sections of topics and 55 texts, the reader covers a lot of ground.

Where the reader earns some criticism is in what is not included. Occasionally, there are times where one point of view is presented without contrary or other views. For example, Calperina Addams’ defense of her acting protégé, Jared Leto, is presented by itself. The texts focus heavily on Western/European conceptions of gender and sexuality even in their deconstruction. More attention could have been paid to where gender and sexuality intersect with Latinx and Asian identities, both within and outside the U.S.

While print often gives off an air of finality, this reader is not an attempt at canonizing these texts. It is an attempt at gathering a wide swath of ideas and then using them to facilitate education. These types of readers are usually not taught as a whole, as there’s only so much time in a semester, and teachers and professors are encouraged to select certain material and to supplement it with additional texts.

If there is a mission statement to this collection, it is in what it assumes to be answered questions or arguments. What Queer is not concerned with is what Schneiderman calls “Gay 101,” or one could call “LBGTQIA 101.” These texts do not argue the right of people’s existences but the ‘how’ of it and present the interactions between people’s lives and these concepts. (One can imagine a short book that argues the former point which simply reads “YES.”) While, unfortunately, such rudimentary education is still needed, Schneiderman’s goal is to facilitate the development of students’ writing abilities through contemporary discussions which, in many spaces, have moved beyond those arguments.

Using questions and additional assignments, Schneiderman asks students to connect to texts and media outside those presented and situates these readings within the wider world. These words never just sit to be read on the page; they are living documents which are to be reacted and responded to. It is this understanding that makes Queer is a great and timely introduction and foundation to writing about topics that fall under the oft complex and changing queer umbrella.

Call for Submissions: Tales of Wanderlust
'Stranger’s Mirror: New and Selected Poems 1994-2014' by Marilyn Hacker
'What You See in the Dark' by Manuel Muñoz