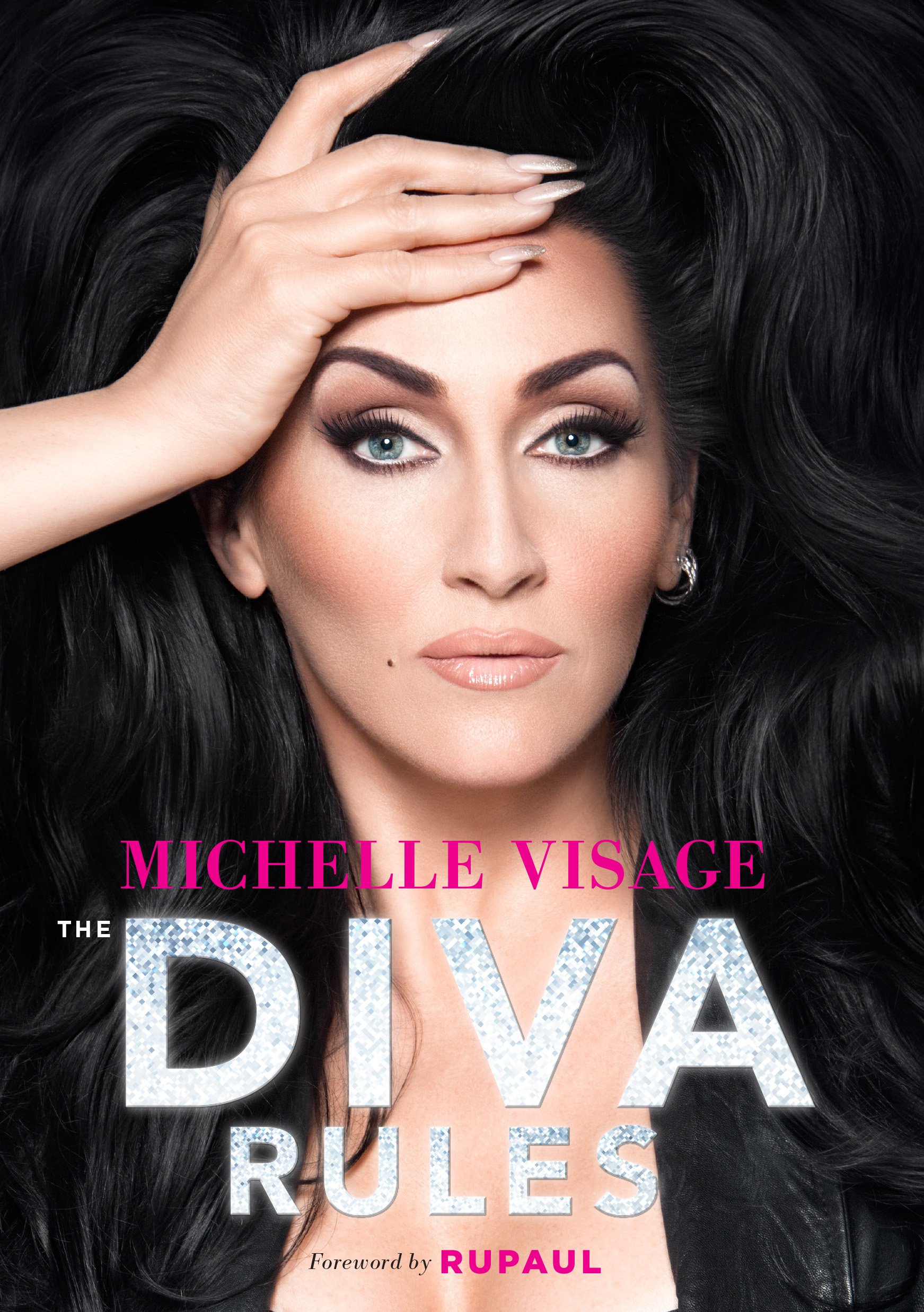 It could be argued that this book doesn’t count as an “LGBTQI book,” so to speak, and part of me agrees—I, too, get frustrated when LBGTQI-oriented spaces feature icons, allies and vaguely hot men over folks in the community. I do have few arguments in favor of me writing about it. The first is that Michelle came up through the New York ball scene of the 1980s and 90’s and she knows she owes her career to her fellow voguers. The second is that this site does queer looks on cis/het literature and features those considered icons/major figures from time to time. The third is that one major target audience of this book is gay men.

Besides, an advice book is very “new year, new me.”

For the uninitiated: Michelle Visage is RuPaul’s right-hand gal and fellow judge on RuPaul’s Drag Race and has recently made a turn on a season of Celebrity Big Brother over in the UK. I personally don’t care for some of RuPaul’s politics and the quality of Drag Race as of late, however, I still maintain a very special affection for Michelle. Perhaps it’s because we’re both of the bridge-and-tunnel sort, but from different sides. Perhaps it’s because she reminds me of aunts and other relatives on the Italian-American side of my family. Perhaps it’s because she’s very accessible, either on social media or on tour. Perhaps it’s simply because I know some of her story already.

The story of the lady who becomes Michelle Visage begins with her being born to a young Joanne in New Jersey and being adopted by Marty and Arlene of South Plainfield. She graduates high school with dreams of becoming a Broadway star and attends the American Musical and Dramatic Academy in New York City. Encouraged by her mother to get out in the world and into the clubs, she goes to The Underground and ends up finding her crowd which includes Cesar Valentino and Willi Ninja. Soon, she becomes a member of the House of Magnifique and competes in the Vogue and Face categories. (Her stage name comes from the fact some of her friends used to call her “Cara,” Spanish for “face.” Tired of other people thinking her name was actually Cara, she went with the French translation: Visage.)

From there she gets noticed by the Queen of NYC nightlife, Susanne Bartsch. While working for her, she first encounters her future friend RuPaul, and Madonna sees her and friends perform at the first Love Ball. After college, she gets a day job working as a receptionist for a clothing showroom, doing auditions when she can. Hearing from a friend about a girl group being formed, she wows the producers and thus Seduction is born. The group lasts a year, due to in-group tensions and touring with the infamous Milli Vanilli, but puts out the hit single “Two to Make It Right.” (There’s also her stint with The S.O.U.L. S.Y.S.T.E.M. and the hit “It’s Gonna Be a Lovely Day.”) Looking for work, she almost auditions to be a stripper, but ends up as an emcee for the strip joint instead. Through her connections, she lands a radio gig that leads to various other radio and television hosting gigs.

Eventually, she and RuPaul find each other again and start working together. However, when the chance to be on Drag Race comes around, her boss doesn’t let her take time off to be on it, because he doesn’t want to “harm the station’s image.” The situation temporarily sours her and Ru’s relationship. During this time, she also suffers a major anxiety attack that prompts her to change some things in her life. When the chance to be a judge comes around again, she’s able to get it with a little pep talk from her friend, Leah Remini. The rest you’ve probably you’ve seen on television.

Michelle is arguably on her third career, having been a singer, then a radio and TV host and now a TV personality. (Most people usually only have one or two, at best.) I think it’s inarguable that she’s a celebrity now that she appeared on Celebrity Big Brother, since it’s right there in the name. But even if Drag Race wasn’t a breakout hit, she would still be a gay cult figure / icon, only lesser known.

What is interesting to me is that she has become popular during this period of renewed interest in LGBTQI-originated and oriented nightlife of the 80s and 90s with a new reverence for its importance. While she is most known because of the show, she is also part of RuPaul’s and World of Wonder’s Oprah-esque media empire that includes and features personalities from the club scene such as James St. James. Her career has come full circle in a way.

But beyond my musings is an important question: Will you enjoy this book? Depends.

Do you like Drag Race? Because reading this book is a bit like marathon-ing all seasons of the show, even All-Stars. It’s a show that hasn’t met a pun or innuendo it won’t make and Ms. Visage is no slouch in this department either. (Another reason she feels like an aunt of mine.) Sometimes these jokes fall flat on the page, because what often makes these jokes work is how they are said. Arguably, I’m just making the case for listening to the audiobook version.

Also, are you in the mood for advice? There’s good and bad advice, but good portion of advice’s power comes from a person being open to it. Michelle’s advice ranges from general platitudes with a fabulous twist to the very practical. It helps that her “diva rules” are given alongside the story of her life so far. It’s not presented as “Do this!” but instead as “Here’s what I did in this situation, it might work for you too.”

Occasionally, I found the “my gays” and “my people” rhetoric a bit tired; it made me feel like a brand was trying engage with an audience. However, when it came to specific people in her past, they are handled with more sincerity. She recognizes that she—a straight white girl from Joisey—was taken in by folks of vastly different circumstances than hers and writes of her friends of the balls and piers with both affection and honesty.

But, dear reader, let me tell you that something magical happened to me after finishing this book. For the most part I enjoyed the book, even if it’s a bit eyeroll-worthy with the deluge of puns, innuendos and references, and containing some side-eye worthy phrasing. However, in the process of writing the review, I thought about Visage’s interesting career path. A little bit unsure of my own next steps, looking at her career helped put mine in perspective; I learned that a career path doesn’t necessarily need to be in a straight line to be successful. And for that, Michelle, I thank you.

'The New Negro: The Life of Alain Locke' by Jeffrey C. Stewart
'Original Fake' by Kirstin Cronn-Mills and Illustrated by E. Eero Johnson
‘Read Me Like A Book’ by Liz Kessler